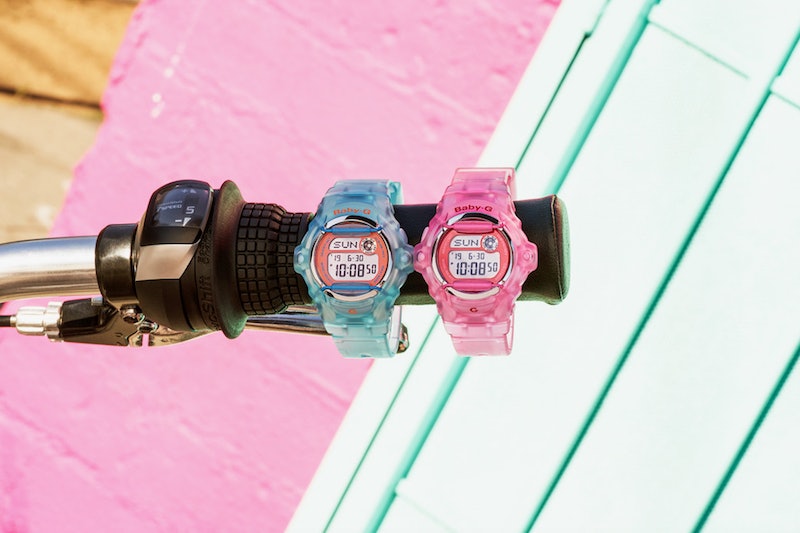 One watch brand is about to give you a heavy dose of nostalgia with their new timepiece collection. Baby-G made a Neo Retro Theme Series, which consists of watches that look like the clear plastic ones you used to wear as a tween in grade school. Translucent and coming in candy colors, these stylish watches borrow from the aesthetic of Tamagotchis, cassette tapes, and transparent Game Boys.

It looks a lot like the kind of watch you would beg your parents to get you for your birthday back in the fourth grade, just this time you can buy it yourself. There are two different watches in the series, letting you choose from a pink or blue version. The BG169R-4E is the "Light Pink" version, which has more of a Barbie shade than a pastel or cotton candy hue. It also has red accents to give it more of a pop. The second option is the BG169R-2C, which is the "Light Blue" pick with orange accents. That particular color looks like a clear aqua shade, which would look playful against any outfit you throw at it — whether that's a casual athleisure look, or a more dressed up summer dress. When you have an accessory as retro and memorable as this '90s-themed watch, it only makes sense to get adventurous with your outfit and help it stand out.

The watches also come with utilitarian features, where they are water resistant up to 200 meters, are shock resistant, have an EL backlight, are digital, and come with a countdown timer. They're not just fun to look at — they're also very functional.

If the name "Baby-G" sounds familiar, that's because the brand has been around for awhile. It's the women's branch of Casio, a watch company that started in the '70s and sold the world's first digital watch with an automatic calendar. Baby-G came about in 1994, and became one of the defining accessories of the decade, where the plastic, clear accessory was also tough and nearly indestructible. Their main audience were girls in their late teens, but people of all ages owned them.

Now Baby-G is having something of a comeback, tapping into the wave of nostalgia that has brought back '90s fashions such as fanny packs, high waist jeans, Jerry Seinfeld shoes, and overalls. And the brand knows that it has that kind of sentimentality working for them. Hannah Rowe, Campaign Manager at Baby-G, admitted to Hunger TV that that's their main selling point, agreeing that they are a "brand that is rooted in 90’s nostalgia but with fresh bold styles."

"It is a really exciting time for Baby-G, we have started to see a strong resurgence of the brand among leading edge girls and this campaign is all about championing what these girls are all about," Rowe shared, explaining how their throwback watches give consumers what they want: a link back to their childhood, just grown up.

The new models retail for $79 and are already available at baby-g.com, making them an affordable blast to the past.