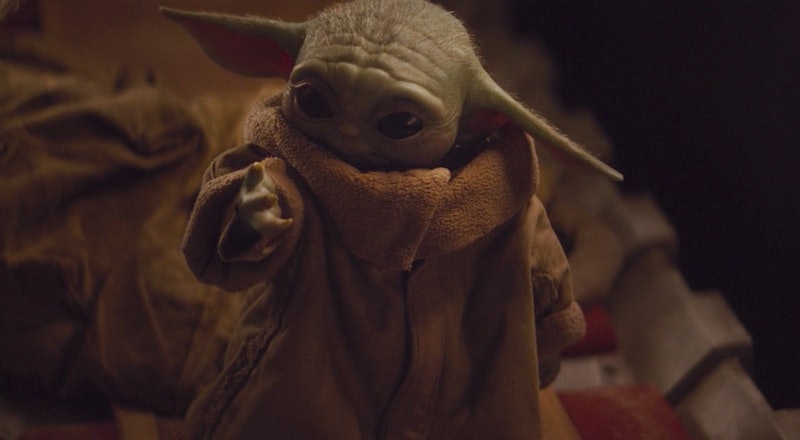 Spoilers ahead for The Mandalorian Chapter 6. While Mando saved Baby Yoda from whatever menacing fate the Client had in store for him, the bounty hunter continues to put the Child at risk. Baby Yoda used the Force in The Mandalorian after Mando teamed up with his old, law-breaking gang. Well, technically, Baby Yoda tried to use the Force when Zero attempted to kill him. Again, it was Mando to the rescue since the Mandalorian was able to destroy the droid before it hurt the Child. Based on the ineffectiveness of his efforts, Baby Yoda's Force power seems to still have some maturing to do. But this Force setback in "The Prisoner" could be setting up Baby Yoda to save Mando in a major way for The Mandalorian Season 1 finale.

To earn some money, Mando got involved with a group of bandits he used to work with in Chapter 6. The mission went rather foreseeably awry with the team turning on the Mandalorian. While he needed to escape the New Republic ship holding prisoners, Baby Yoda was stuck on the Razor Crest with the droid Zero. The droid learned that the "curious" Child was a valuable bounty after seeing an old transmission from Greef Karga. Zero decided to get involved in this Bounty Hunter Guild situation by hunting down Baby Yoda in the Razor Crest and the droid seemed poised to kill him.

Baby Yoda wasn't going down without a fight though and he attempted to use the Force on the droid. The Child even believed he had been successful when a blast took out Zero. But it was the Mandalorian just in the knick of time who ended up shooting the droid. This confusion led to (what else?) an adorable Baby Yoda moment where he was impressed with his zapping skills. Yet, it also demonstrates that while Baby Yoda has the Force, he doesn't have the skills to fully control it.

As Baby Yoda is still a baby, he's probably not ready for Jedi training. Although, since Yoda trained Luke Skywalker, The Mandalorian should absolutely take it full circle and have Baby Yoda train at Luke's Jedi Academy (... or maybe not since Kylo Ren will eventually destroy it). But for now, the only time Baby Yoda's Force skills were used successfully was when he was able to stop and levitate the Mudhorn. The Child then went to sleep for days to recuperate, so Baby Yoda will continue to need protection from Mando until he grows up a bit more and fully comes into his powers.

Within the fandom, there is another take on Baby Yoda's Force power that is far more ominous. As Inverse reported, Reddit user -DVTD- proposed that Baby Yoda is using the Force all the time to mind control people into taking care of him. That could explain why everyone is so enchanted by Baby Yoda, but it would also make the 50-year-old Child far less innocent and 100 percent more manipulative. Before the sixth episode aired, Inverse offered some support to the theory by pointing out that droids don't appear to like Baby Yoda, possibly because they aren't influenced by Jedi mind tricks. Both IG-11 and Zero rather instantly wanted to kill Baby Yoda, so Zero's actions in "The Prisoner" could be evidence that there's some truth to this theory.

But who wants to live in a world where Baby Yoda is on the dark side of the Force? Instead, the far more acceptable answer is that Baby Yoda is simply a precious, innocent creature that kindhearted people feel compelled to protect. While Mando has done some treacherous deeds, Baby Yoda seems to be bringing out the best in him. So when the inevitable time comes that Mando needs some saving — say, in The Mandalorian Season 1 finale — Baby Yoda will have hopefully honed his Force skills a bit more so he can save the mighty Bounty Hunter and prove exactly why he's such a valuable asset to the former Empire.

More like this
'Wakanda Forever' Is Already Opening Doors For Mabel Cadena
By Grace Wehniainen
'Bridgerton' S3 Teases Exciting Social Season For Penelope Featherington
By Bustle
You Definitely Know The Voice Of Shuri's AI In 'Black Panther: Wakanda Forever'
By Brad Witter
This James Bond Event At Abbey Road Studios Was A 007 Fan's Dream
By Samantha Rollins
Get Even More From Bustle — Sign Up For The Newsletter