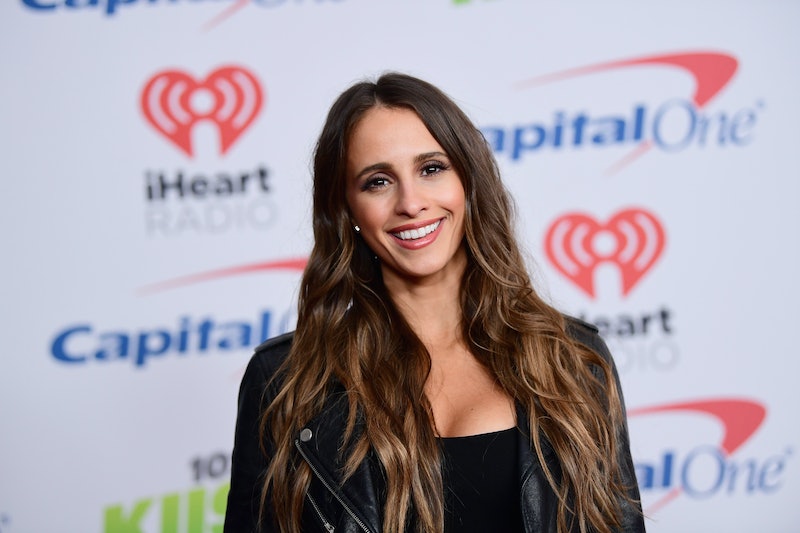 After some speculation into who her mystery man was, Bachelor Nation's Vanessa Grimaldi has revealed her new boyfriend's identity. As People noted, Bachelor alum Vanessa Grimaldi's new relationship became Instagram official on Jan. 28. And like the reality star said previously, during an episode of the Help! I Suck At Dating With Dean, Vanessa, & Jared podcast, her boyfriend isn't a member of Bachelor Nation.

Vanessa's Instagram post features the happy couple in a sweet embrace. She captioned the photo with a simple, "#mcm" and tagged her boyfriend, Josh Wolfe. If you click on his profile though, you'll find that his Instagram is private. So, don't count on seeing any lovey-dovey snaps on his social media account. But, it is fun to see that Vanessa is finally down to share a snap of the couple on her own Insta.

People revealed some details about the Bachelor alum's new man. Like Vanessa, Josh is from Canada. According to the publication, he is a Director of Outreach and Programming for Quebec and Atlantic Canada for the Centre for Israel and Jewish Affairs. As for how the two met, a source revealed that they met through mutual friends and have been dating for a few months now. And, clearly, it seems like things are going super well for their relationship thus far.

As Entertainment Tonight noted, Vanessa's Bachelor Nation pals are overjoyed to see her romance go Instagram official. Danielle Maltby, who appeared on Season 21 of The Bachelor with Vanessa, said, "Now that's a damn fine couple." Wells Adams also commented, and complimented Josh's gray hair, saying, "This pleases me. Also, this pleases me to know that my hair is gonna look pretty rad in about three years. Happy for you nerd!"

Vanessa previously said that she's dating someone new in an interview with Us Weekly. On Jan. 18, she told the publication at the iHeart Radio Podcast Awards, "I am dating someone," and that the relationship was "very exciting." Based on her comments during the April 24, 2018 episode of Help! I Suck At Dating, it sounds like the couple has been dating for quite some time.

At the time, she told co-hosts Dean Unglert and Jared Haibon that she was indeed seeing someone, marking a major revelation for the former Bachelor star. Vanessa told them simply, "I am dating someone right now." However, she didn't go into too many other details about her then-mystery man. She did offer that her boyfriend was Canadian, that they met through a friend, and that he wasn't a part of Bachelor Nation, which definitely fits with everything known about Josh.

As you'll recall, Vanessa first captured fans' hearts on Season 21 of The Bachelor, during which she received the final rose and an engagement from Nick Viall. But, the couple sadly parted ways in August 2017 and released a statement to E! News which read, in part, "This hasn't been an easy decision, however, as we part ways, we do so with lots of love and admiration for each other."

Of course, the silver lining here is that Vanessa has since moved on with her new man, Josh, and is currently living her best, happiest life, which is all that really matters.