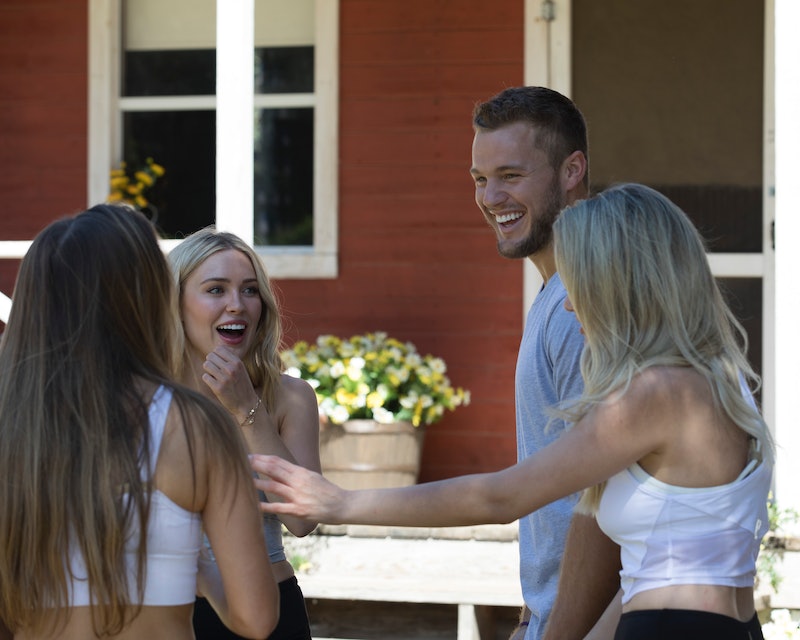 While all of the seven remaining Bachelor contestants have formed their own bonds with Colton Underwood, Cassie Randolph seems to be at the front of the pack. That makes The Bachelor's new promo for Monday (Feb. 18) night's episode all the more surprising. In the new clip, Bachelor frontrunner Cassie's motivations seems to be called into question, which could really shake things up as the show continues.

So far, Cassie has seemed to stay out of the house drama, focusing instead on her own relationship with Colton. But it looks like that's all about to change because Cassie and Kirpa are seen having a very heated conversation in this new sneak peek.

During the new promo, Kirpa mentions what Katie said to Colton after she was eliminated from the show during last week's rose ceremony. "If Katie felt strongly enough to tell Colton that people still aren't here for the right reasons, or that they're not ready, she wouldn't have made that up," Kirpa says to Cassie.

The speech pathology student, meanwhile, questions why Kirpa was talking about her with Colton in the first place. Kirpa explains that Colton asked for her opinion on the situation, and she gave it to him. Things get heated when Kirpa says that Colton "needs to know all the facts," while Cassie says that whatever Kirpa said to Colton is "a lie."

"Colton's heart is on the line," Kirpa says to Cassie, who maintains that whatever Kirpa said to Colton isn't true. Cassie eventually says that Kirpa's conversation with Colton "reeks of desperation." And in an on-camera interview, Cassie proceeds to call Kirpa an "idiot."

"It's either true or it's not true. It's not your opinion," Cassie says to the camera. "In my opinion, you're an idiot." It's a pretty explosive disagreement, and it looks like Cassie and Kirpa won't be on good terms any time soon, which is surprising considering they've both seemed to be more in the peacekeeping camp up until this point.

If Kirpa did plant doubts in Colton's mind about Cassie being "there for the right reasons," that could throw a wrench into his decisions about which contestants to choose for hometown dates. Colton and Cassie's chemistry is palpable, but he's also said on the show that he wants to get engaged and find his future wife. So if Cassie isn't ready for an engagement, that could definitely cause tension between the two. And it could potentially even result in her being sent home.

Before this apparent fight, Cassie and Colton's relationship did seem a lot further along than Colton and Kirpa's. Kirpa got a rose on her one-on-one date last week, but Colton and Cassie already have a deep connection, too. And in a deleted scene from last week's episode, Colton gave Cassie a shell he found on the beach. If Colton is giving her gifts, it's safe to say he has a lot of feelings for Cassie already.

But even with Cassie and Colton's connection, it's worth remembering that he's likely on guard after Sydney, Katie, and Demi hinted that some of the other girls weren't on the show "for the right reasons." Even if Colton does choose to go on a hometown date with Cassie, they might have a difficult conversation coming up, based on whatever Kirpa apparently told him.