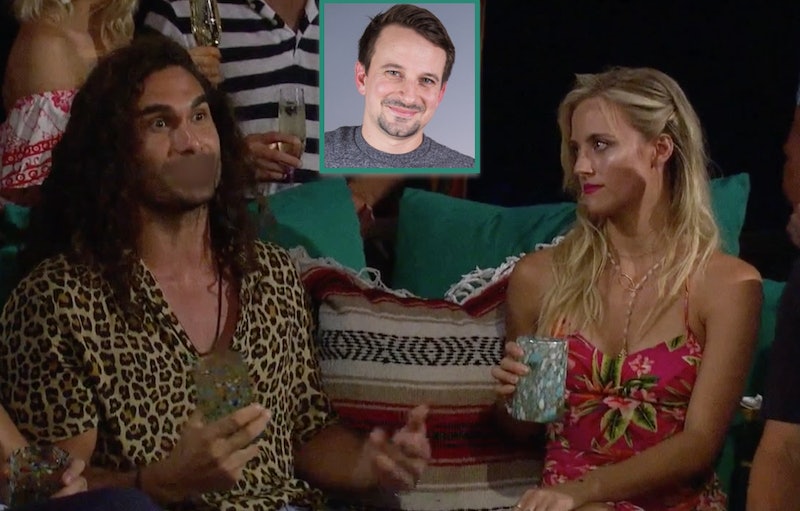 Another week of Paradise hit us like a frozen margarita to the face and it KEEPS GETTING MORE INSANE. No one in this cast has a freaking clue who or what they want in a relationship. I’ve never seen a group more willing to cast aside whatever good relationship they have in hopes that the grass is greener or, in this case, the sand is more sandy on the other side. This season of Paradise has a very Tinder-esque feel to it. The cast hangs out with a guy or gal for a while but then swipes left as soon as a new arrival shows up. This week Eric dumped his main cheese, Angela, once Cassandra’s feet touched the scalding Paradise sand. Venmo John friend zone-d Jubilee and then sent Chelsea to the picnic table as soon as Olivia showed up. And finally, Krystal bailed on Chris to go howl at the moon with Connor.

But the big drama of the week came by way of Leo melting down on the grandest of scales. It’s always tragically beautiful to watch how the pressures of Paradise reveal insecurities. Everyone deals with stress differently; Leo dealt with it by calling Grocery Store Joe a b*tch and throwing a drink at him. Bonus points to the acrobatic producer for his cat-like hop to stop any further shenanigans. Leo spewed toxic verbal waste pretty much the entire time he was on the show, but he did raise one good point. He exasperatedly attempted to couch his behavior with the dramatic statement, “There are no rules in Paradise.”

It’s a frequent statement — even I’ve said it —and it begs the question: What rules are there in Paradise, if any? As much as I hate to agree with the scoundrel, Leo is basically right. Personal safeties aside, there are very few rules... but that’s why the show works! When I was on Paradise, I decided I would do all of the crazy things. I stopped trying to be cool, put my ego aside, and started drama when I felt like it. AND IT WORKED. I ended up with the girl and a fantastic story! Leo, of course, is attempting to hide behind his disgraceful behavior with a "no rules" excuse, which is silly. There are "no rules," but there are consequences — both on the show and on Twitter — to being a d-bag.

So, in an environment with no rules, how much self restraint should a Paradise contestant have? That’s why I’m here. Instead of rules, let’s call them "Don'ts" that all future Paradisers should abide by so they can have kids like me. A bible for babies, if you will.

To be successful on Paradise, there are a few simple Don’ts:

Being deceptive on Paradise is the quickest way to become a villain on the show. Leo going "all in" on Kendall but then kissing Chelsea on the side is the most obvious example. If he had just told Kendall that he was also seeing someone else it wouldn’t have been a big deal, because this is the most incestuous cast of all time. But instead, he hid his philandering and Kendall had to find out from Kevin, leading to Leo’s downfall. No matter how crazy actions on Paradise seem, as long as you talk it out, it ends up working out. Or you go home. Either way.

The greatest travesty in all of Paradise is to show up and do nothing except drink on the beach. This applies to relationships, too. Boring relationships usually fail. Why? Because if you’re boring on Paradise, then you aren’t being authentic. Every relationship goes through ups and downs, and let me tell you, if you don’t have any adversity in Paradise then you’re probably being anti-social and just making out all the time. If you’re not in a relationship and see no potential suitors, why not have some fun and stir up a little drama? Jordan is the best example this season. Whether he's throwing stuffed animals into the sea or prancing around in floral beachwear, he's always doing something interesting.

If you are comfortable in Paradise, then you will be challenged. And you can either do it yourself or allow the Paradise Gods to bring the storm. It’s a huge risk to go on a Bachelor show to begin with. While sponsorships can be lucrative for a select few, there is also the possibility that you'll look like a complete idiot (like me on The Bachelorette.) But this season I’ve liked how Kendall has ventured out and test driven some dudes. The guys do it all the time, so I’m happy she’s bringing some balance to the group. To be honest, I’m mostly OK with it, because if she breaks up with Joe then I can start an aggressive campaign for Grocery Store Joe as The Bachelor.

Before I went on the show, I ran into Cupcake from Kaitlyn’s season, Tenley who had been on Paradise, and Brady who ditched Kaitlyn for Britt a few years ago. They all gave me the same advice: Be yourself. Really, it’s terrible advice... at least at first. You should go in there with your guard up and should only incrementally let the deepest parts of yourself out. Although it ended up working out for me, I wouldn’t say spilling your heart and professing your love to someone is a good idea after a few days. The likelihood of falling in love, although higher on Paradise, is still very very low. So use it as a journey to discover yourself and let love come as it may. Annaliese, for example. She desperately wants to find love on Paradise, so much so that she’s willing to go for it with anyone who walks on to the beach. I’m surprised she hasn’t tried to court the staff at the hotel yet. Hopefully, she takes my advice from here on out and relaxes a bit and lets love come to her instead of jumping after it. She really is there for the right reasons, after all.

More like this
There Will Be Several Love Triangles On 'Bachelor In Paradise' Season 8
By Kadin Burnett and Grace Wehniainen
Here’s Everyone Heading To The Beach On 'Bachelor In Paradise' Season 8
By Grace Wehniainen
‘The Ultimatum: Queer Love’ Is Officially On The Way
By Radhika Menon and Kadin Burnett
Here’s When You Can Expect More ‘Indian Matchmaking’
By Brad Witter
Get Even More From Bustle — Sign Up For The Newsletter