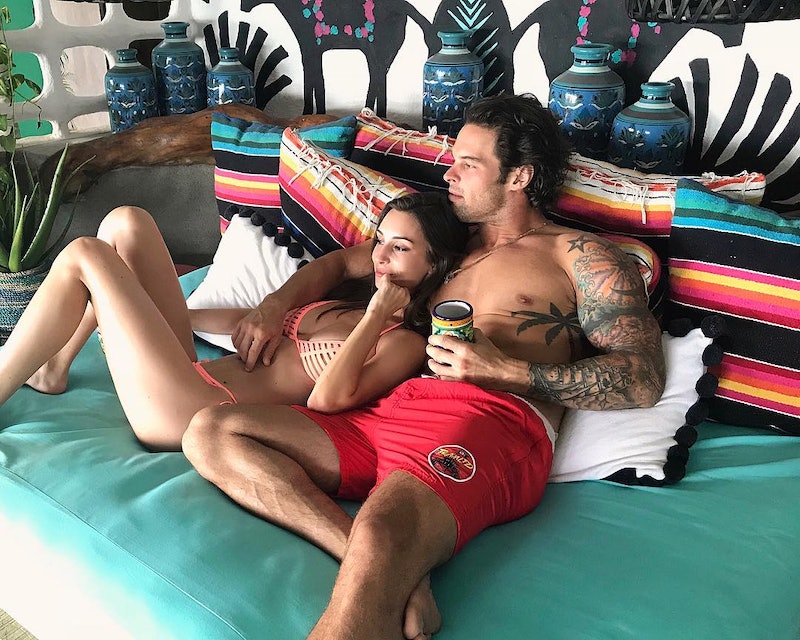 Fans of Bachelor in Paradise have another engagement on their hands, but it's not from the current season (no spoilers here). This time, a couple from the show's previous season, Astrid & Kevin, are newly engaged. And you need to see Astrid Loch's engagement ring.

In case you need a quick refresher, Astrid Loch and Kevin Wendt met on season 5 of Bachelor in Paradise which aired during summer 2018. If you watched the pair's season, you'll know that they were one of the very first couples to form — and they stayed together throughout the entirety of the season. While Wendt ended their relationship at the end of the show, he contacted Loch after filming ended and admitted that he regretted the decision. They've been dating ever since. Now, the pair have gotten engaged.

According to People, Loch and Wendt went on a bike ride and picnic during the day on Aug. 28, but Loch suspected nothing during their outing. In the interview with People, Wendt even details trying to cram the ring into his skinny jeans so Loch wouldn't know he had it. Eventually, though, he pried the ring box from his jeans and proposed. Not only is the ring gorgeous, but there's a sweet story behind the shining solitaire diamond.

Wendt explained to People that Loch's engagement ring is from Wendt Jewellery in Ontario, and yes, it is his family's business. The store was founded by his great-great grandfather, and his family members have been proposing with rings from the shop for 135 years.

As for what Loch's ring looks like, it's a minimalist (but certainly not small) solitaire diamond on what looks to be an eternity band. While many Bachelor and Bachelor in Paradise alums go for massive rocks (like JoJo Fletcher's new engagement ring), Loch's shiner is refreshing for its simplicity and elegance.

Loch and Wendt are far from the only couple from Bachelor in Paradise to get engaged. They're actually in great company. Many of the most recent marriages in Bachelor Nation have come from Paradise, the franchise's spin-off.

Last week on the current season of BiP, former contestants Krystal Nielson and Chris Randone were married on national television in a stunning celebration in Mexico with the current cast of the series in attendance. Like Wendt and Loch, they met on season 5 of the show, and the newly engaged pair actually attended the wedding according to Loch's Instagram.

Wendt's ex , Ashely Iaconetti, is also among former Bachelor in Paradise contestants to get married. She and Jared Haibon tied the knot earlier this year in Rhode Island marking a whopping three couples in just the past few months alone who have either gotten married or engaged from the franchise. And people say this show doesn't work...

With the latest season of Bachelor in Paradise coming to a close later this month, fans are left to wonder if any new couples will be added to the list of successes. Until the finale airs, viewers will have to keep making predictions (or find online spoilers) to see who could be the next successful BiP love story.