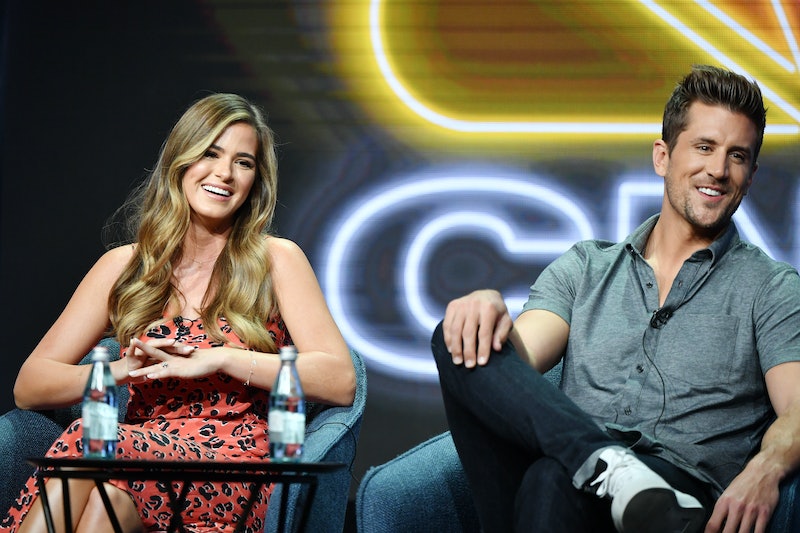 With everything going on in Bachelor Nation, sometimes your old faves may fall to the wayside. That hasn't been the case with JoJo Fletcher and Jordan Rodgers. The couple are still a popular favorite, and now, JoJo Fletcher's second engagement ring is making headlines. Yes, you heard that right. Fletcher and Rodgers are engaged again, and you have to hear the reason why and see the gorgeous engagement ring.

In Instagram posts from Aug. 25, both Fletcher and Rodgers shared that they were engaged. For fans of The Bachelorette, this may have caused some confusion. Did the pair end up together but not get engaged at the end of the season? No, actually, the pair have been engaged since Fletcher's season of The Bachelorette aired back in the summer of 2016. Apparently, Rodgers just wanted to do things all over again on his own terms.

In his Instagram post, the final man standing from Fletcher's season and her long-time partner explained, "I always wanted to re-propose, with no cameras, no producers, no drama...just us. Our first engagement was so real, and meant so much to us both, but as we start to actually plan our wedding for next year I wanted to do it all over again, OUR WAY!"

That's exactly what he did and with a giant ring.

In his post, Rodgers goes on to explain all the reasons he loves Fletcher in an adorable and heart felt way. At the end of the caption, Rodgers closes out explaining his plan writing, "So this time the promise and commitment were the same as the first, but this time my love for her has grown a million times over. And 50 years from now I’ll look back and it’ll have grown a million times over again. And so the greatest adventure in life begins (again)...with the my best friend."

As for the photo itself, while the couple looks super cute, it's hard to miss the massive diamond solitaire on Fletcher's hand.

In fact, that ring was so major that the pair showed it off twice when Fletched posted her own photo. Of course, though, Fletcher also had a series of kind words for her finacé including letting fans know that she had no idea what he had planned.

Like Rodgers, she also took to Instagram to showcase her new ring and the sweet gesture from her partner. In her post, the former Bachelorette star writes, "I thought we were just wedding venue searching this weekend but BOY WAS I WRONG...Yesterday, Jordan asking me to marry him... again!! I didn’t see it coming nor ever expected it... I can’t put into words how much it meant to me."

Could Bachelor Nation be seeing another televised wedding? In an Instagram story, Fletcher and Rodgers did explain that they're looking at venues in California, but only time will tell if they choose to have Chris Harrison hosting their nuptials. Until then, fans can just admire Jojo Fletcher's second engagement ring. There's definitely plenty of carats there to admire.