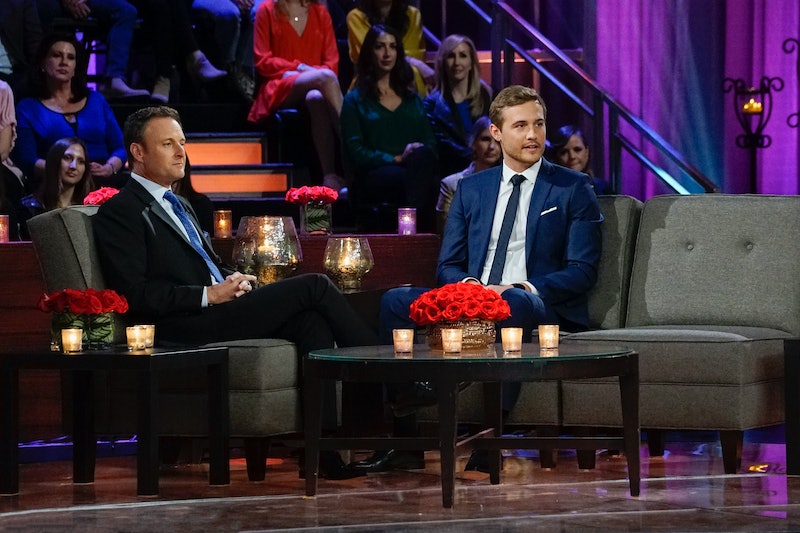 Peter Weber has faced some significant backlash throughout the course of his Bachelor season. However, if there's one thing the pilot won't apologize for, it's for following his heart no matter what — even when it's pulling him in multiple directions. In fact, during a recent chat with Entertainment Tonight, Peter defended falling in love with three women on The Bachelor, explaining that his feelings for Madison, Hannah Ann, and Victoria F. were all completely genuine, despite how upset it seems to make some fans.

"If I wasn't feeling that way, I wouldn't have said it," he told ET's Lauren Zima at the taping of the Women Tell All on Feb. 21. The California native went on to reveal that he's a strong believer in the concept of multiple soulmates and doesn't think there's just one special person out there for someone, which is why his heart became so torn near the end of the season.

"I've always been a firm believer that the heart wants what it wants, and I think this experience for sure has shown me that there's not just one soulmate out there," Peter stated. "I think at some point in my life, I used to think that, and I've definitely been able to give my heart to more than one person. So, it's possible."

Peter's feelings for his contestants may be genuine, but that hasn't prevented drama from taking over his overnight dates. Fantasy Suites week put his relationship with Madison at risk after he informed her that he had been intimate with the other contestants, despite her previous objections to the idea since she's saving herself for marriage. When asked if she would be willing to move past this, Madison was unable to give Peter a clear answer, leaving many to speculate that she'll end up quitting the show.

But even if Madison chooses to stay, Peter still has a very big decision in front of him. Because while he may be in love with three women, he'll be forced to break at least two of their hearts by the time he hands out that final rose.