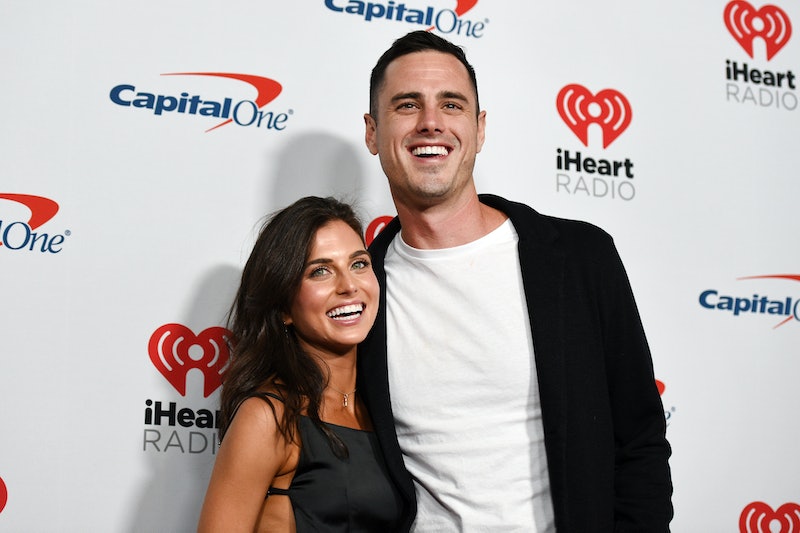 One former-Bachelor star found his forever-love at last. On Friday, Ben Higgins proposed to girlfriend Jessica Clarke, and the two are officially engaged, according to E! News. Higgins, who starred on the 20th season of The Bachelor, planned the romantic proposal at Clarke's family home in Franklin, Tennessee, as per E!. The reality star, whose original plan to pop the question in New York City's Central Park was derailed by the new coronavirus pandemic, still managed to make the moment special.

Higgins shared his scenic proposal to Clarke took place near "a pond behind her house" that he then set up "with sunflowers near a bench." Despite the last-minute change in location, the podcast host managed to surprise Clarke. "It's right in their backyard, but a little hidden," he said. But the reality star didn't manage to keep it all under wraps, as he began to cry before even reaching the secluded spot, and Clarke cried too. Higgins added: "She said it was one of two things: either I was ending our relationship, which would have been a huge shock, or I was proposing."

On Saturday, Clarke posted a photo of the proposal on Instagram, writing, "I don’t remember everything you said, but I know that I said yes." She added: "I woke up in a dream today and I get to live in this dream every day from now on (eeeep)."

The former-Bachelor star seemed equally excited about the engagement during his interview with ET Online. "She’s my best friend, my partner and I love her. I was nervous to kind of do this whole thing in front of her. I wasn’t anxious, it’s just a big moment!” He also noted that the presence of Clarke's family made the moment extra-special. "I proposed and her family and mine were watching from a distance, and then we all celebrated together."

Higgins' proposal came after over a year of dating. In January of 2019, Higgins mentioned that he was dating someone on an episode of The Ben and Ashley I. Almost Famous podcast, according to People. One month later, Higgins confirmed his relationship with Clarke on Instagram, posting a photo of the two on vacation in Honduras. He wrote, "I've been selfishly keeping this girl to myself for too long! Hey friends meet @jessclarke_."

The Generous Coffee co-founder revealed how the two met on Instagram, writing that he "successfully slid into her Dm’s a few months ago." He added, "I took a risk and I am glad I did. She is someone special, and I look forward to where life is going to take us."

Since going public with their relationship, Higgins and Clarke have posted plenty of relationship updates on Instagram. It's no surprise that the couple shared their engagement with fans on social media as well — and it looks like they can use their sheltering at home time to work on wedding plans.