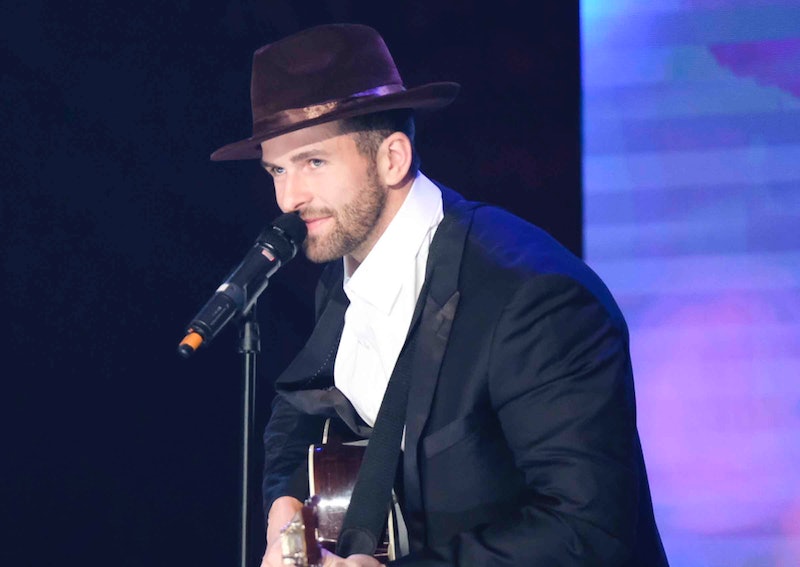 It all sounds a little like a sad country song: Jed Wyatt, aspiring musician and contestant on Hannah B.'s season of The Bachelorette, may not have been totally transparent when it came to his time on the reality show. Jed reportedly had a girlfriend while on The Bachelorette, aspiring musician Haley Stevens claimed to People. Stevens said she had been dating the contestant for four months prior to his departure for filming. Bustle reached out to Jed for comment, but did not hear back at the time of publication. However, Jed did address his Bachelorette controversy on Instagram, writing:

Stevens told the outlet that she had met Jed last October in Nashville and that the pair had dated up until just before filming. "We spent the night together the night before he headed to L.A.," Stevens revealed to People. "He told me [the show] was just an obstacle and we'd be stronger on the other side because of it."

Stevens confirmed that Jed had only pursued the show for career purposes, a fact Jed admitted to Hannah during their first one-on-one. Fans may remember that contestant Scott was eliminated by Hannah during episode one for allegedly having a girlfriend before filming, showing how seriously she takes such an offense. Stevens explained:

"He told me [early on] that he had applied. He said, 'It's probably not going to happen, but it's a huge opportunity. I'm only doing this for my music.' He only did it for his career."

"He wanted a platform. He kept telling me, 'I don't want my dad to have to help me pay rent anymore.' He said he only wanted to be top five … to be a major player so that it would be beneficial."

However long Jed intended to stay on The Bachelorette, Stevens said she didn't feel fearful that he would actually develop feelings for Hannah. "He was always so reassuring," she said. "He told me, it's not real. It's acting."

Stevens further claimed that after Jed got confirmation of his casting in February that the couple exchanged 'I love yous' during a trip to the Bahamas. "He called me when he landed in L.A.," Stevens shared. "He said, 'I love you, and I'll call you when I get back.'" Stevens provided People with a photo of the pair on a beach and a handwritten note from Jed which read, in part, "You know where my heart will be."

As the weeks progressed, Stevens opened up about the lengths she went to find out about Jed's fate on The Bachelorette.

"I was following along on spoiler accounts, trying to figure out when my boyfriend was going to come home," Stevens said. "I bought a homecoming outfit that I was going to wear to maybe pick him up at the airport."

Still, Stevens told People she "was terrified that he would fall in love with Hannah. In the beginning I felt bad [watching the show] because I thought he loved me and was faking dating her. But then I thought, my boyfriend could be engaged to someone else. Seeing him kissing her for the first time was the worst day."

According to Stevens, Jed reportedly "ghosted" her upon his return to Nashville and the two hadn't spoken until this month. "He said, 'Hey how have you been?' and I said, 'How do you think I’ve been?'" Stevens claimed. "I asked him, 'You didn't think I deserved a phone call?' And he said, 'I didn't know what to say.'"

Despite the circumstances, Stevens told People that she doesn't believe Jed is a "terrible person." However, she explained, "And part of me thinks I was the backup plan and he wanted me to be here in case it didn't work out. I feel 100% betrayed."