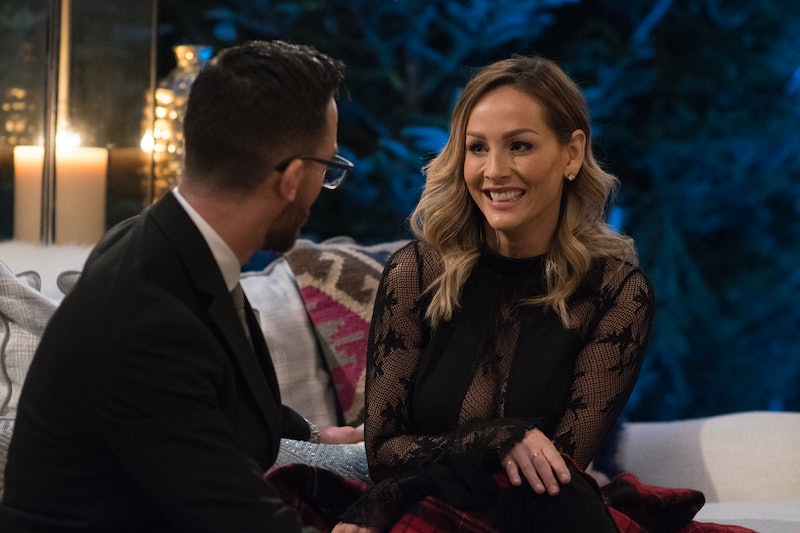 Concerns about the spread of COVID-19 have now affected every nation in the world — including Bachelor Nation. In order to help fans of the Bachelor franchise through this uncertain time, here are all of the Bachelor franchise coronavirus updates in one place. From the delay of Clare's Bachelorette season to the remaining questions about the current status of Bachelor in Paradise, here's everything a fan needs to know.

Even before producers made the decision to shut down filming on Season 16 of The Bachelorette, host Chris Harrison revealed that everyone working on the show was doing their best to stop the spread of the coronavirus. On March 11, he told Entertainment Tonight that there were "a ton of precautions being taken" on the set ahead of filming, which was set to being on March 13. "There are massive amounts of handwashing stations," he said, adding that, "we are having a part of a trailer where we will have a doctor. You can be checked out [for the virus]."

At the time, Harrison also revealed that producers also planned to avoid international travel for Clare and her men, and film in picturesque locales in the United States instead. While that's not a concern for Clare's season anymore, international travel restrictions could impact the filming of Bachelor in Paradise this season. Here's where things stand right now:

When Will The 2020 Bachelorette Season Premiere?

Fans are going to have to wait longer than planned for The Bachelorette's new season. Harrison confirmed on April 10 that Clare's Bachelorette season premiere date has been delayed indefinitely in an interview with Entertainment Tonight.

Clare was originally supposed to begin filming on March 13, kicking off with limo entrances at the Bachelor Mansion; however, on that same day, Warner Bros. Television — which produces the Bachelor franchise — announced that production had been suspended indefinitely. In an Instagram post responding to the delay, Clare wrote that the Bachelor producers are "taking it day by day and even hour by hour" to figure out the next move, "as this is so unpredictable."

Right now, it's unclear when production will start up again, but on March 16, the CDC recommended people "cancel or postpone in-person events that consist of 50 people or more," for 8 weeks, which would mean that the earliest filming could possibly resume is in May. Unfortunately, it's unclear whether or not gatherings will be able to resume as usual at that time, or if restrictions will be extended.

Will Clare's Bachelorette Men Be Recast?

When the list of men competing for Clare's heart was revealed in early March, many members of Bachelor Nation were concerned that they were too young for Clare, who turned 39 on March 20. As a result, both Clare and Harrison encouraged fans to submit even more hopefuls to compete on the season. "I'm all for casting new guys," Harrison said on an Instagram Live. "Is Clare going to date a 23-year-old man? No, she's not. It's just not going to happen."

Of course, there's a more practical reason for recasting: the delay might mean people can't get time off from work again when filming starts again. "The idea that everybody's just going to be able to take off work and do this again? Probably very slim," Harrison said, adding that the men who were originally cast have been released from production because "we don't have a set time of when we're going to come back."

Speaking to ET in April, Harrison confirmed that ABC was actively casting for both Clare's Bachelorette season and the next Bachelor season, despite not knowing who the Bachelor will be. "We are still looking," he said.

In February, ABC's Senior Vice President of Alternative Series, Specials & Late-Night Programming Robert Mills confirmed that the network was planning to air Bachelor: Summer Games in conjunction with the Olympic Summer Games, which were scheduled to kick off on July 24, in Tokyo, Japan. However, while the status of the 2020 Olympic games is currently in question due to concerns about the spread of COVID-19 and international travel restrictions, Summer Games has officially been called off. "It was absolutely going to happen if the world was in good shape. But unfortunately, the world had other plans," Mills said during the March 17 episode of The Ringer's Bachelor Party Podcast.

The cancellation of Bachelor: Summer Games was confirmed to The Hollywood Reporter on March 30, after the 2020 Olympics were officially rescheduled for 2021.

Is Bachelor In Paradise 2020 Still Happening?

Bachelor: Summer Games isn't the only spinoff that involves international travel; Bachelor in Paradise is filmed every year in Mexico, but it's unclear whether or not everyone's favorite cast members will be able to fly to paradise this year. However, Mills said on the Bachelor Party Podcast that ABC is "absolutely committed — God willing we return to normalcy somewhat soon — to trying the best we can to keeping things on track." As a result, the network may adjust filming schedule to accommodate travel restrictions: "Do we swap out Paradise for Bachelorette to shoot Paradise first? Then Bachelorette then Bachelor? Or does Bachelorette start first?"

Harrison, however, made clear that Bachelorette was his first priority. Speaking with ET on April 10, he said that he's focused on starting production on Clare's season as soon as possible. However, if they have to move forward with Bachelor in Paradise first, he has a solution for the fact that there won't be any castoffs from Clare's season to fill the beach: Bachelor: Listen to Your Heart. "Maybe that's the move — we got some great cast members that you guys are about to be introduced to on Monday," he teased.

Which Bachelor Alums Have COVID-19?

Former Bachelor Colton Underwood announced on Friday, March 20, that he had tested positive for COVID-19 and is in self-isolation. "For anyone out there that is hesitant to self quarantine... please do yourself and your loved ones a favor and stay home," he wrote on Instagram. In his video message to fans, he made it clear that, though he is able to rest at home, the virus is no joke. He can't walk up the stairs without losing his breath. Colton had been practicing social distancing with his girlfriend, Cassie Randolph. As he revealed in the video, he is currently staying with her and her family.

Will Coronavirus Affect Listen To Your Heart?

For better or for worse, there is one Bachelor spinoff that will not be affected by concerns about the coronavirus. The Bachelor's music-focused spinoff, Listen To Your Heart will premiere on April 13, to help Bachelor Nation pass the time in self-isolation, while they wait for Clare's Bachelorette season to resume filming.

While there are many things that are still up in the air, regarding future episodes of the Bachelor franchise, it's clear that nothing will stop Listen to Your Heart from bringing their musical love stories to the small screen — not even COVID-19.