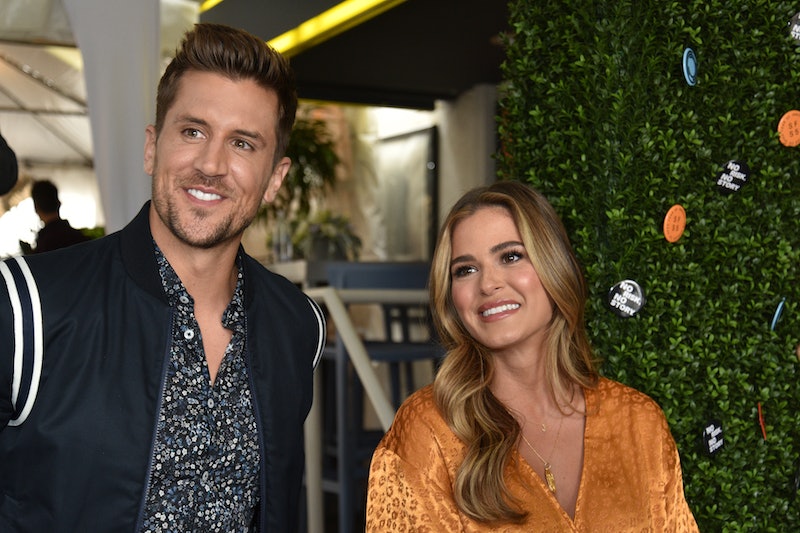 If you are a proud denizen of Bachelor Nation and a fan of reality shows about couples who flip houses, then the newest preview for JoJo Fletcher and Jordan Rodgers's forthcoming series probably has your name on it. As People reported on Monday, July 15, the trailer for JoJo and Jordan's show, Cash Pad, is out in all of its sledgehammer-wielding and safety goggle-wearing glory. Back in January, CNBC announced that the Bachelor Nation couple’s rental property flipping show had been given the green light, and now it's almost here: The show is set to premiere on CNBC on Tuesday, July 23.

For eight episodes, viewers will get to watch JoJo and Jordan renovate income properties in Dallas, Austin, and Phoenix. As per a press release provided to Bustle, the Bachelor Nation duo will team up with "homeowners who are hoping to turn their properties into thriving short-term rentals." The press release continues,

"Whether they're transforming a decrepit shipping container, a rundown airstream, or a garage in disrepair, JoJo and Jordan are up for the task of creating one-of-a-kind vacation hot-spots that will provide a life-changing financial boost for their homeowner partners and help expand JoJo and Jordan’s growing short term rental portfolio."

You can watch the supertease below.

JoJo and Jordan are no strangers to the reality TV world, and they are no strangers to the home flipping world, but they are new to the home flipping reality TV show genre. JoJo, who was the runner-up on Ben Higgins’s season of The Bachelor, was the star of the 12th season of The Bachelorette. There, she met Jordan, gave him her first impression rose, and a few weeks and several deli meat platters later, they were engaged. A little over three years have passed since they first crossed paths at the Bachelor Mansion, and now JoJo and Jordan have their very own spinoff.

JoJo was in the real estate development game long before she joined Bachelor Nation. In a Realtor.com interview from 2018, she shared that she helped design the student housing facility where she lived when she was still a student at Baylor University. "I actually started when I was in college," JoJo said. "I developed and put plans together for a new residential build on my college campus. After we built it, my girlfriends and I moved in." This would be the beginning of her property renovation career. As she recently explained to D Magazine,

"It’s been something that my family has always sort of done on the side. But I started doing it in college because I was looking for a house to live in and there was nothing on our campus. So, I went to my parents and told them, 'Listen, there’s a demand here; people want to look at houses.' When I graduated, I took it over and I started doing more student housing. And then when I moved to Dallas, that’s when I got into remodeling homes."

JoJo also told D Magazine that Cash Pad "feels a lot different than The Bachelor [or] The Bachelorette." She went on to say that both are stressful in their own way, adding, "I’ll tell you—I cried less on this one."

Hey, it's like they say: There's no crying in baseboards.