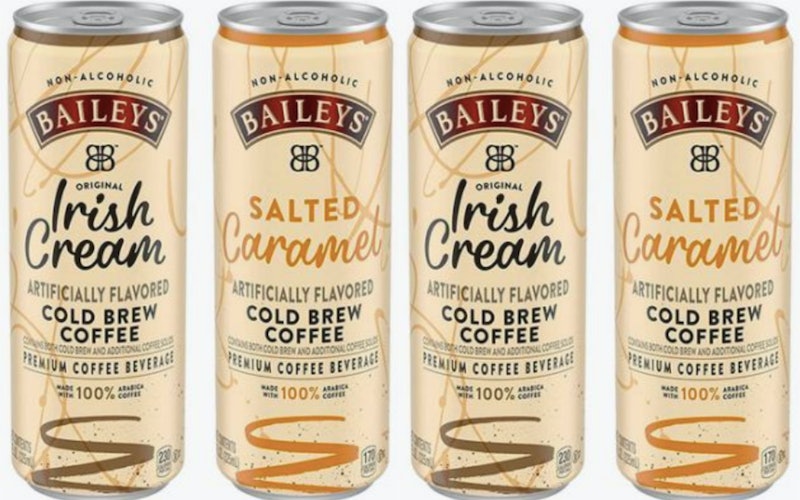 If you think drinking Baileys with coffee is delicious and are actually in it more for the flavor than the alcohol content, then Baileys has something new for you. As noted by the food Instagram account Candy Hunting, Baileys now has cold brew coffee cans that come in two non-alcoholic flavors. I'll say that again for any college students out there who think they can use these to both stay awake and get a little tipsy: These. Do. Not. Contain. Alcohol.

Instead, the Baileys Cold Brew Coffee drinks combine the creamy flavor of Baileys with cold brew coffee. The two flavors are Original Irish Cream and Salted Caramel. The drinks are artificially flavored, contain "both cold brew and additional coffee solids", and are make with 100% Arabica coffee. Also, like Baileys itself, these drinks contain milk.

According to Candy Hunting, the coffees are available at Meijer supermarkets, and a couple commenters on the account said they saw them at Hannaford, with one saying that they're "very good". Both flavors of the drinks are also available on Amazon, with a 12-pack of 11 ounce cans going for $28.68. Sounds pretty pricey, but that comes out to about $2.30 per can — not too bad, but it doesn't seem like you're getting a discount for buying in bulk. (There's only one review on Amazon so far, but it's titled "Yummy" and reads, "Loved this!!!") Oddly enough, there is also a listing for three cans on eBay.

If you can't find the Baileys Cold Brew Coffee in a supermarket near you and don't want to pay $30 for a 12-pack, there are plenty of other options out there for portable cold brew, because cold brew you can pop into your purse is really popular right now.

For one, Trader Joe's recently introduced cold brew Coconut Cream Lattes that are vegan. They come in Original and Caramel Spice, which has "notes of caramel, cinnamon and orange zest," according to the brand. These cans are 9 ounces and are priced at $1.99. Trader Joe's also sells a Cold Brew Coffee can with plain black coffee and a French Vanilla flavored one that contains dairy milk. Both of these are $1.79 for an 8 ounce can.

Starbucks sells cold brew in cups, obviously, but the chain also has bottled cold brew that comes in four varieties: Black (which was released back in 2016), Cocoa & Honey with Cream, Sweetened Black, and Vanilla & Fig with Cream. The drinks are sold in participating Starbucks locations and in grocery stores.

These beverage options are in addition to all the to-go orders of cold brew, cold brew concentrates, and make-at-home cold brew recipes out there, so there are plenty of ways to get your frosty caffeine fix whether you want Baileys in it or not. By the way, another good option? Make your own cold brew and just pour some Baileys in it. If you're in a situation where you can have actual alcohol, of course.