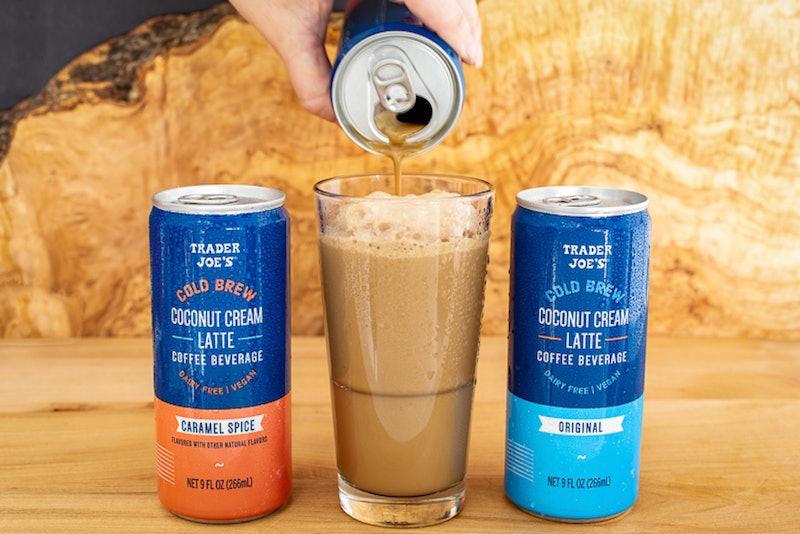 Tired and lactose-intolerant? Tired and vegan? Tired and can't stand the taste of dairy milk? This one's for you. As reported by Chew Boom, Trader Joe's now has Cold Brew Coconut Cream Lattes. The cans are a convenient way to get your coffee fix on the go... well, as long as you like coconut milk.

The Cold Brew Coconut Cream Lattes come in two flavors: Original and Caramel Spice. According to Trader Joe's, which announced the drinks on May 29, the Original variety "offers classic cold brew flavor and creaminess" and Caramel Spice has added natural flavors "that give it an extra-tasty boost, including notes of caramel, cinnamon and orange zest." Trader Joe's suggests refrigerating the cans or serving the coffee over ice.

Both versions are made with 100% Brazilian Arabica beans, and the cold brew is combined with coconut cream from Sumatra, Indonesia and cane sugar. The cans are 9 oz. and sell for $1.99. The full ingredients list and nutritional information can be found here.

As Trader Joe's notes, the chain has sold cold brew latte cans since 2016, but there wasn't a non-dairy latte option until now. Trader Joe's already carried French Vanilla Cold Brew Coffee with milk in a can, as well as a Black Cold Brew Coffee can, which did not contain milk at all. The stores also have a number of other cold brew options that don't come in individual serving cans, like bottled cold brew coffee concentrates.

Kitchn reviewed the new drinks and writer Elisabeth Sherman preferred Original over Caramel Spice, but explains that both flavors took some getting used to. "The sweetness of the coconut cream and the bitterness of the cold brew make an admittedly strange flavor combination," Sherman writes of Original. "Still, it grew on me after a couple sips, and I decided I actually enjoy that unusual punch of coconut in my coffee." Sherman describes the Caramel Spice as "almost like someone combined piña colada mix, coffee, and caramel syrup," but explains that it wasn't as bad as that sounds.

The blog Become Betty also reviewed the drinks and writes of Original, "there is a good amount of coconut flavor and added sweetness that comes through." While the writer says this is one of the better canned coffee drinks they've had, they add, "If you don’t care for a sweetened coffee drink, then skip out on this one." Like the Kitchn reviewer, Become Betty also liked Original better than Caramel Spice, of which they write, "The caramel comes through, but the spice is a bit muddled in terms of flavor."

Trader Joe's is always releasing new products, so maybe they'll try another non-dairy latte in the future. Almond, soy, or oat milk would probably be less divisive than coconut, which can be a pretty overpowering flavor in general. In the end, it sounds like the Trader Joe's Cold Brew Coconut Cream Lattes won't be for everyone, but seem to be tasty enough if you need the convenience of canned caffeine and like the taste of coconut.