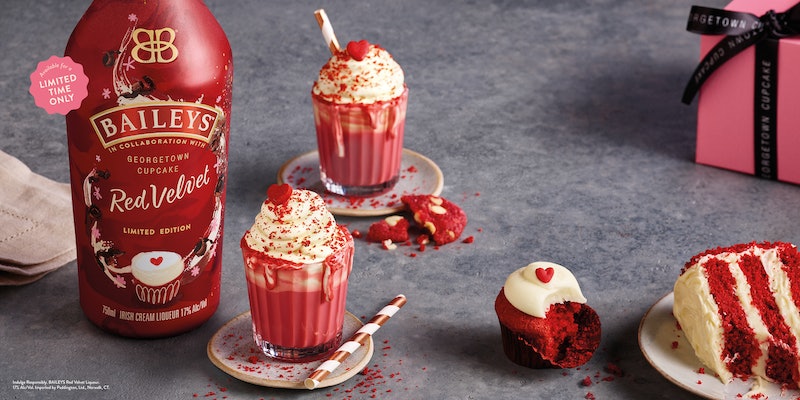 Baileys Irish Cream is no stranger to unusual flavor combinations — and now, there’s something new on shelves for the cupcake lovers in the crowd: Baileys Red Velvet Irish Cream Liqueur claims to taste like one of the most iconic red velvet cupcakes in the country. A limited-edition treat, the new flavor, which is a collaboration with Washington, D.C.-based cupcake bakery Georgetown Cupcake, will be available only for as long as supplies last — so if you’ve ever dreamed of making yourself the perfect Irish coffee that also tastes like cake, act fast. Now’s the time to make that happen.

Founded by sibling duo Katherine Berman and Sophie LaMontagne in 2008 — just a few years after California-based competitor Sprinkles Cupcakes got its start in 2005 — Georgetown Cupcake was a major player in the humble cupcake’s resurgence in popularity during the 2000s. Now a nationwide phenomenon, it’s known as much for its classic flavors as it is for its special and seasonal ones. Given that the bakery’s signature flavor is Red Velvet, it makes perfect sense that Baileys would team up with Georgetown Cupcake on this limited-edition version of their classic liqueur.

According to a press release provided to Bustle, the Baileys Red Velvet experience begins with “aromas of freshly baked red velvet cupcakes, sweet cream, and buttery icing.” On first taste, you’ll get notes of “fresh chocolate cake,” “a dollop of cream cheese frosting,” and “just a hint of cocoa powder.” The finish, meanwhile, rounds things off with “rich chocolate and creamy icing flavors,” which “combine to create a delectably indulgent liqueur.” Now available at spirits purveyors nationwide, Baileys Red Velvet will set you back about $23.99 for a 750ml bottle.

As cake flavors go, red velvet is curiously divisive. Those who aren’t on board with it tend to dismiss it as simply chocolate cake loaded with food coloring; however, those who adore it insist it’s much more than that. And, to be fair, an actual red velvet cake really is more than just a dyed chocolate cake: Traditionally, ingredients include buttermilk and vinegar, which tend to react in interesting ways when they meet non-alkalized cocoa powder. Per Spoon University, one of the things it does is change color, resulting in a “dark brick red”-colored cake, regardless as to whether there’s any food coloring present (these days, it’s often added to enhance the color). The Takeout adds that the buttermilk and vinegar also react with the baking soda used in the recipe, giving the cake a “super fluffy or velvety” texture.

In case you want a little red velvet to go along with your red velvet, all Georgetown Cupcake locations will have a special Baileys Red Velvet cupcake on offer throughout the months of November and December. The cupcake is non-alcoholic, but according to a press release, it’s “infused with the flavor of Baileys Irish Cream.” You’ll also be able to order this variety online, in the event that you don’t live near a brick-and-mortar Georgetown Cupcake location. Yum!