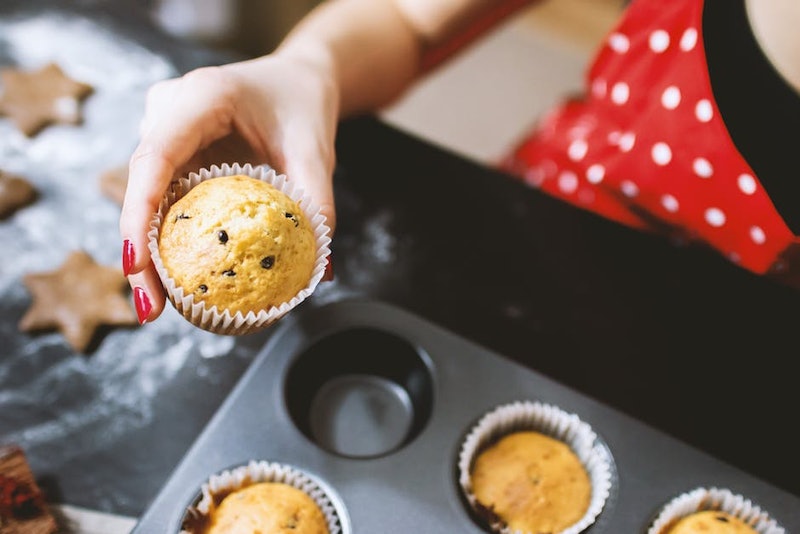 When I was 11, I tried to make my mom macarons for her birthday. One thing led to another, a carpet was ruined, people were injured (me), people cried (me), and I ended up grounded. Needless to say, I haven’t done a lot of baking since. I may be missing out, though. This week, the Huffington Post spoke to a number of psychologists who explained that baking for others has a number of mental health benefits, and is an effective way to practice stress relief, communication, and mindfulness.

According to Donna Pincus, Associate Professor of Psychological and Brain Science at Boston University, baking allows individuals to express their creativity. “There’s a lot of literature for connection between creative expression and overall well-being. Whether it’s painting or it’s making music [or baking], there is a stress relief that people get from having some kind of an outlet and a way to express themselves.”

Engaging in creative pursuits, no matter how large or small, can have a significant impact on one’s well-being. In a recent study published in the Journal of Positive Psychology, researchers followed 658 people for two weeks and found that doing things like cooking and baking “made the group feel more enthusiastic about their pursuits the next day.”

Baking for others is also a good way to communicate, especially for people who may not be comfortable expressing their emotions.

“In many cultures, in many countries, food really is an expression of love, and it’s actually beautiful because it’s something we can all relate to,” said Julie Ohana, a licensed medical social worker and culinary art therapist. “I think it could border on an unhealthy issue when it replaces communication in the traditional sense, but if it’s done along with communication, it is absolutely a positive and really wonderful thing.”

In other words, when you bake your roommate cookies because you borrowed their favorite shirt and spilled red wine all over it, don’t forget to include a note explaining how it’s not really your fault because they should hide their clothes better in the first place.

The precision and focus required in baking also promotes mindfulness, an age-old practice that experts believe can help with a number of issues, including stress-reduction, emotional flexibility, and relationship satisfaction.

“Baking actually requires a lot of attention,” explains Dr. Pincus. “You have to measure, focus physically on rolling out dough. If you’re focusing on smell and taste, on being present with what you’re creating, that act of mindfulness in that present moment can also have a result in stress reduction.”

The concept of baking for one’s mental health has gained popularity in recent years. The Depressed Cake Shop, for instance, is a grassroots organization that encourages people to host pop-up bake shops and donate all of the proceeds to a mental health charity. The only is rule is that all of the baked goods must be grey.

“For a lot of us involved in this project, mental illness and baking are linked,” Melanie Denyer, the host of London’s Brick Lane pop up, told the BBC. “A lot of us turn to baking when we’re feeling low. Some of us even started baking because they were ill and needed something simple as a focus. And there is genuinely something very therapeutic about baking.”

And while it's important to note that baking alone is not a cure for mental health issues, it seems like we could all benefit from whipping up a batch of cupcakes once in a while. Just try not to ruin a carpet in the process.