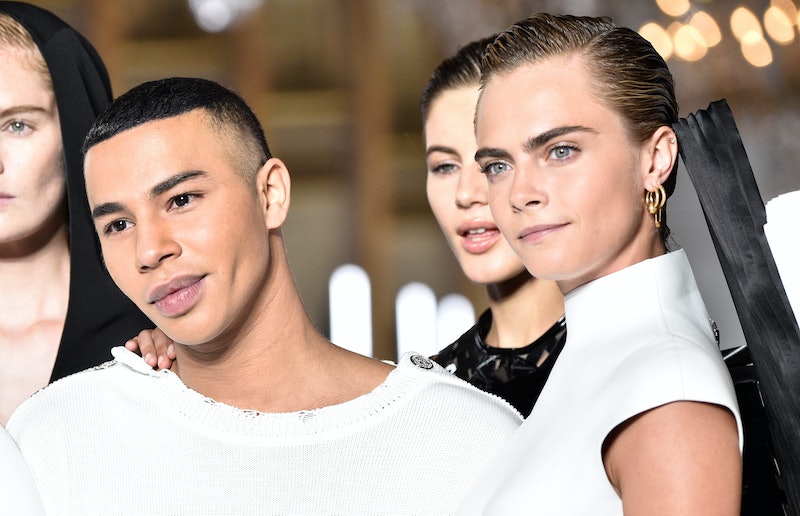 As the head of the fashion house Balmain, Olivier Rousteing has created some of the most iconic looks the runway has ever seen. His latest venture is a Balmain x Puma collection, and the designer teamed up with his friend and muse Cara Delevingne to bring us sports chic like you've never seen it before.

The collection, which features 35 unisex items, takes its inspiration from boxing. Speaking about the design experience, Rousteing said that "everyone involved — Puma, Balmain, Cara, and [him] — was determined to create something timeless."

Speaking about the theme, he said: "Boxing is a uniquely positive, motivating force. It gives you the confidence to stick up for yourself and defend others. Today we do need to push back, protect inclusion and defend everyone's right to be exactly who they want to be... That's always been a key message for me and it's at the heart of the collaboration."

In the promo videos for the collection, Delevingne (who has known and worked with Rousteing for many years) can be seen rocking the looks inside a boxing ring, serving pure power.

One interesting piece in the collection is the black and gold tracksuit, which comes with a jacket and slim trousers. The block gold against the black echoes a style Balmain's has used before for his signature logo tees.

Despite it being a sportswear-focused capsule, there is no shortage of glam in this collection. For example, the '80s-style red, black, and blue dress that Delevingne herself seems very keen on, having uploaded it to her Instagram. The dress gives off serious sports-luxe vibes without being sportswear, with its high neck and killer shoulder pads adding extra oomph.

The most stand out piece, however, has to be the sequinned, floor-length boxing gown. This is so extra, but in the very best way.

Neither Puma nor Balmain have given us any indication on pricing yet, but as Puma is a high street brand, we're hoping the items won't break the bank.

The collaboration will be available worldwide on Nov. 21, and another collection of six items will be shown as part of Balmain's spring 2020 designs at Balmain stores.