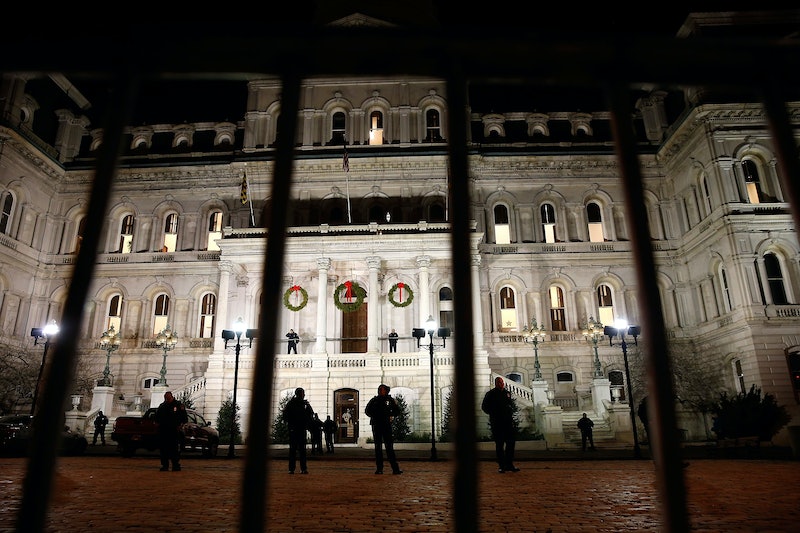 In a lawsuit filed on Wednesday, the city of Baltimore is suing Trump and his administration over an immigration policy that it claims discourages immigrants from taking advantage of public benefits. In the court filing, Baltimore alleges the new policy has deterred immigrants from signing up for government-provided opportunities, like food stamps and housing vouchers. Bustle has reached out to the White House for comment.

The lawsuit addresses a change the administration made to the State Department's Foreign Affairs Manual last January. Specifically, the change allows State Department workers to take immigrants' use of public benefits into account while they're considering visa applications. Within the court filing, the city of Baltimore claims that legal immigrants, as a result, have virtually stopped using food subsidies, school programs, housing vouchers, health clinics, and other government opportunities for which they are legally eligible, because they're afraid of losing their current immigration visa, or the opportunity to earn one.

But the policy shift doesn't just affect immigrants who have already been given immigration visas legally: it also informs the decisions State Department employees make about which immigrants to grant visas to, and which ones to reject.

The lawsuit specifically names Trump, Secretary of State Michael Pompeo, and the U.S. Department of State as defendants. It argues that the policy change is violating several federal laws, including the Constitution's guarantee of equal protection.

Baltimore is using more than one style of evidence to prove its point, though. In addition to citing the precipitous drop in various program participation (the lawsuit notes that enrollment in Head Start early education programs by African immigrants has “virtually ceased" in the last six months), the city is also using anecdotal evidence from an entirely different source: Trump's Twitter feed.

According to The Washington Post, the lawsuit references over 20 of POTUS' tweets, all of which suggest in one way or another that immigrants in the United States are an unnecessary drain on the country's resources. On Nov. 28, for example, Trump retweeted a statistic that falsely claimed undocumented immigrants receive up to $3,874 a month in the United States.

The city of Baltimore does not cite any examples in which immigrants have been denied visas directly because of their participation in cash benefits. But John Lewis, an attorney working on the lawsuit, argued that it's still likely making an impact. “Even if the city’s programs don’t track an individual’s immigration status, when you apply for a visa, you have to give truthful answers,” he said. “If they ask you about what public benefits you’ve taken or if they find from other records that you’ve taken these benefits, you could potentially be worried about the immigration consequences.”

According to The Baltimore Sun, the immigrant population in the city plays a critical role in its economic health. Nine percent of businesses in the city are owned by people from a different country, and immigrant households account for $964 million in local spending power.