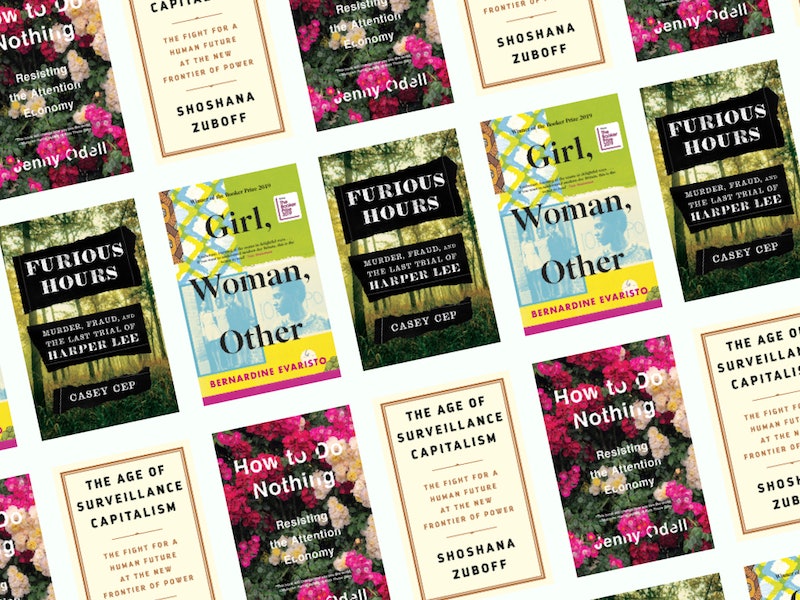 Former U.S. President Barack Obama took to Twitter this weekend to promote his favorite books and movies of the year. Following close on the heels of his comments about women's leadership, Barack Obama's favorite books of 2019 highlight his respect for powerful women. Keep reading to find out more Barack Obama's reading recommendations, including the 17 newly-recommended 2019 books he loved this year.

After telling a Singaporean audience earlier this month that he was "absolutely confident that for two years if every nation on earth was run by women, you would see a significant improvement across the board on just about everything," Barack Obama went on to make books by women constitute more than half of his reading recommendations for 2019. Of the 38 books Obama recommended on Twitter, 22 — nearly 58% — were written by women, including books written by two of the POTUS' former advisers, Valerie Jarrett and Susan Rice. Additionally, woman-authored titles accounted for 9 of the 17 brand-new books on Obama's end-of-year list.

Of course, without another book from Michelle Obama, it's difficult to top the former POTUS' list of favorite books from last year, which included a special shout-out to his first lady, designating her debut memoir, Becoming, as "obviously my favorite!"

Of the 38 books Obama recommended, here are the 17 released in 2019 that you'll want to get your hands on.

The Age of Surveillance Capitalism: The Fight for a Human Future at the New Frontier of Power by Shoshana Zuboff

If something is free, you're the product — and you should probably think twice about it. That's the message of Shoshana Zuboff's The Age of Surveillance Capitalism, a book that pulls back the veil on data-mining to reveal how Facebook, Google, and other internet mainstays are processing your behavioral data for profit.

The Anarchy: The Relentless Rise of the East India Company by William Dalrymple

For 100 years before the British Raj ruled India, the Asian subcontinent was controlled by the East India Company — an English corporation that held a monopoly on global trading. In The Anarchy, William Dalrymple explores the history of a country ruled by a corporation and the story's implications for our post-Citizens United present.

Years after she helped Truman Capote complete In Cold Blood, Harper Lee traveled home to Alabama in the late 1970s to write her own work of true crime. It would never be published. In Furious Hours, Casey Cep uncovers the facts about the case — which involve a vigilante who killed an accused murderer at his victim's funeral and a lawyer who represented both men — and Lee's writing difficulties, post-Mockingbird.

Girl, Woman, Other by Bernardine Evaristo

The Heartbeat of Wounded Knee: Native America from 1890 to the Present by David Treuer

Filling a major gap in the literature on Native American history, Ojibwe author David Treuer's The Heartbeat of Wounded Knee examines the realities of life for indigenous Americans after the 1890 massacre. Covering individuals' and tribes' resistance to assimilation, this work of nonfiction paints a new portrait of Native American life in the last 130 years.

How to Do Nothing: Resisting the Attention Economy by Jenny Odell

How many times do you have to remind yourself not to check your work email on the weekends or not to text your friends back the second they message you? If you're having trouble taking time for yourself, Jenny Odell's How to Do Nothing should be on the very top of your TBR pile. This fascinating new book examines our often toxic relationship to productivity, while championing a radical new plan — doing less.

From the author of The Story of My Teeth and Tell Me How It Ends comes this new, Booker Prize-longlisted novel about one family's cross-country summer road trip from New York to Arizona. Set against the backdrop of a massive children's migration at the southern U.S. border, Lost Children Archive is a timely must-read.

Another collection of connected short stories, Bryan Washington's Lot begins with a queer, Afro-Latinx boy growing up in Houston, and then zooms out, offering intimate glimpses into the lives of the city's other residents. This compelling novel-in-stories makes for a promising debut.

Even Obama can't stop talking about this book. Sally Rooney's Normal People has been the "it-book" of the year. The story here centers on Connell and Marianne, high-school sweethearts from different social circles, who keep their relationship a secret. Attending the same university after their inevitable breakup, however, the two find their social standings utterly inverted, and must wrestle with the implications of their new positions among peers.

In 1961, debut memoirist Sarah M. Broom's mother, Ivory Mae, bought her eponymous home in New Orleans East. Shortly after she gave birth to Broom, the 12th child in a blended family, tragedy struck as Ivory Mae's husband, Simon Broom, died unexpectedly. The grieving widow threw herself into the running and renovation of the Yellow House — only to eventually lose it as well.

Say Nothing: A True Story of Murder and Memory in Northern Ireland by Patrick Radden Keefe

Five years after the official end of the Irish Troubles, the discovery of skeletal remains reopened an unsolved murder that was long suspected to be the work of the IRA. In 1972, masked assailants had abducted Jean McConville from her home in front of her 10 traumatized children. Although several arrests in the case were made, no one has ever been brought to justice for McConville's death. In Say Nothing, Patrick Radden Keefe identifies an alleged killer — an ever-present figure overlooked in previous investigations.

After being convicted of armed robbery in 1971, Albert Woodfox was later charged with the 1972 murder of a guard at Louisiana's Angola prison. As a result, he served 43 years in solitary confinement as punishment for a crime he did not commit. Released in 2016 after his conviction was overturned, Woodfox penned Solitary to tell his powerful story.

The Topeka School by Ben Lerner

Set in the late 1990s, Ben Lerner's The Topeka School centers on Adam Gordon, the debate-wiz son of psychiatrists, as he attempts to bring an isolated boy into popularity, with catastrophic results. Drawing lines between Columbine-era high-school climates and the modern-day radicalization of white men, this novel is not one to be missed.

New Yorker culture critic Jia Tolentino shines in her first essay collection. Published earlier this year, Trick Mirror compiles nine previously unseen essays from Tolentino that explore the depths of life on the internet, of seeing and being seen, and of self-determination in the Digital Age.

The 2019 National Book Award for Fiction winner, Susan Choi's Trust Exercise centers on two drama students at an arts-focused high school as their relationship falls out. If you think you know the story, believe me when I say that you absolutely do not. Choi's novel twists and turns, calling everything about the previous narrative into question. This is a can't-miss book.

A Different Way to Win: Dan Rooney's Story from the Super Bowl to the Rooney Rule by Jim Rooney

The son of Pittsburgh Steelers founder Art Rooney, Dan Rooney made a name for himself, both as the general manager of the Steelers and as the U.S. ambassador to Ireland. Dan famously implemented the "Rooney Rule," which required NFL hiring teams to interview at least one candidate from an ethnic minority group for each major vacancy. Written by Dan's son, A Different Way to Win will resonate with sports fans.

The Sixth Man by Andre Iguodala and Carvell Wallace

Written by Memphis Grizzlies player Andre Iguodala — formerly of the Golden State Warriors, Denver Nuggets, and Philadelphia 76ers — and author Carvell Wallace, The Sixth Man examines Iguodala's career both on and off the court, where his investments and activism shine.