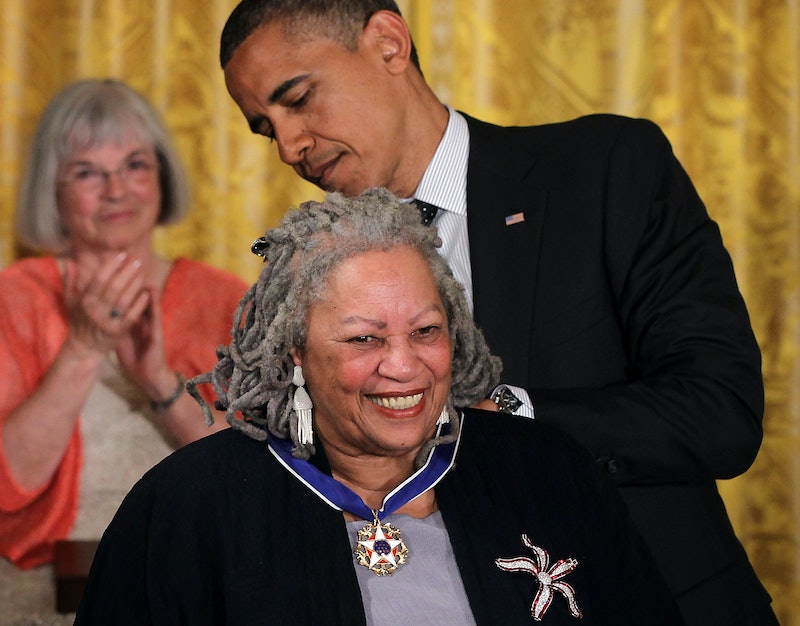 On Monday, the world lost one of its brightest lights and greatest talents. Barack Obama's tribute to author Toni Morrison, who has died at the age of 88, perfectly encapsulates her influence and legacy and celebrates her brilliant writing.

The former president is known for his love of books – he writes them, he reads them, and he recommends them. In fact, he loves to share what he has been reading in lists of his favorite books, which he posts every so often.

Obama is also a long-time admirer of Toni Morrison, and in 2012, he bestowed upon her the Presidential Medal of Freedom. At the ceremony, Obama spoke about Morrison's grit as a single mother who carved out time to write 11 beloved novels. "Circumstances may not have been ideal, but the words that came out were magical," he said.

"Toni Morrison's prose brings us that kind of moral and emotional intensity that few writers ever attempt. From “Song of Solomon” to “Beloved,” Toni reaches us deeply, using a tone that is lyrical, precise, distinct, and inclusive. She believes that language 'arcs toward the place where meaning might lie.' The rest of us are lucky to be following along for the ride."

In a tweet posted on Tuesday morning, Obama reiterated his love for her stories:

"Toni Morrison was a national treasure, as good a storyteller, as captivating, in person as she was on the page. Her writing was a beautiful, meaningful challenge to our conscience and our moral imagination. What a gift to breathe the same air as her, if only for a while."

Obama included an image of him and Morrison in The White House, taken after he bestowed the Presidential Medal of Freedom upon her:

Obama posted the same image on Instagram and shared a longer tribute to the beloved author:

"Time is no match for Toni Morrison. In her writing, she sometimes toyed with it, warping and creasing it, bending it to her masterful will. In her life’s story, too, she treated time nontraditionally. A child of the Great Migration who’d lifted up new, more diverse voices in American literature as an editor, Toni didn’t publish her first novel until she was 39 years old. From there followed an ascendant career—a Pulitzer, a Nobel, and so much more—and with it, a fusion of the African American story within the American story. Toni Morrison was a national treasure. Her writing was not just beautiful but meaningful—a challenge to our conscience and a call to greater empathy. She was as good a storyteller, as captivating, in person as she was on the page. And so even as Michelle and I mourn her loss and send our warmest sympathies to her family and friends, we know that her stories—that our stories—will always be with us, and with those who come after, and on and on, for all time."

If there is one thing Morrison's readers should remember, it's this: Her stories will continue to inspire writers and readers for generations to come.