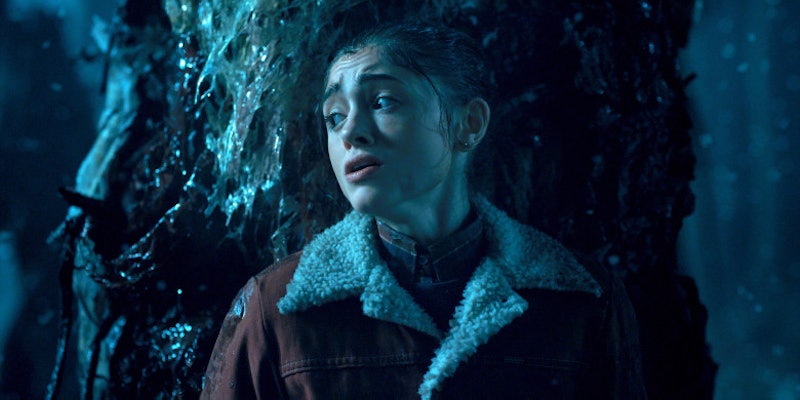 One of Stranger Things' biggest breakout characters was Nancy's sweet, tragically doomed best friend Barb, played by Shannon Purser. The runaway #WeAreAllBarb movement made her eventual demise sting particularly hard for fans, who were egged on in their hopes for Barb's return by the intro sketch to the Golden Globes, which had the show's young stars, Millie Bobby Brown, Gaten Matarazzo, Caleb McLaughlin, and Finn Wolfhard, jokingly rapping that Barb is alive — a surprise not just for fans, but for the show's cast, too. "I had no idea that was coming," Natalie Dyer, aka Nancy, tells Bustle about the Golden Globes moment. And while Brown has confirmed in interviews since that Barb is absolutely still dead, Dyer notes that what happened to Barb is "definitely still on Nancy's mind."

For Dyer, who stars in the new movie Long Nights Short Mornings, now available on iTunes and On Demand, having Nancy reckon with the loss of Barb has been a huge part of getting into character. "Thinking as much as you can about what it must feel like to lose a friend like that, it’s a lot," she says. "It’s a very traumatic experience." But, Dyer adds, Nancy is a "determined" teen who can get through anything.

It's hard to argue with that logic, considering that within a few months, Nancy fought off a supernatural beast, entered a creepy plane of existence, had her best friend get killed by the beast, and helped rescue her brother's best friend who was also kidnapped by the evil monster That's a lot to handle, and it's not even getting into Nancy's complicated love life. Many viewers were surprised at the end of Season 1 when Nancy paired off with the arrogant jock Steve, rather than the quiet Jonathan, with whom Nancy had developed a deep bond. The future is unclear for the trio, and both men "are contenders," Dyer says, adding, "The way the writers write these arcs and these characters you just go back and forth: 'oh, he’s great. But oh, he’s great.'"

Dyer reveals that if she's Team Anybody, she's probably Team Nancy. "My thing has always been: I don’t think Nancy necessarily needs to be with anybody," she explains. "She’s gone through a lot, internally. It’s been a messy year for her after everything went down."

Yet while Dyer adds that while she understands fans' interest in Nancy's romantic pursuits, she thinks it shouldn't be a focus. "I get it. It’s hard not to get into [the romance]," she says. "But from my perspective in that character, it’s kind of like 'c’mon guys, Nancy’s gotta kick some Demagorgon butt, she can’t just be worried about that.'”

Among Nancy's many layers, she's a caring and supportive older sister, a lovestruck teen grappling with gender dynamics, and a relentless, fearless mystery-pursuer trying to rescue her missing best friend. Some of Nancy's greatest moments on the show are her more physical and confident acts, such as when she bravely explores the Upside Down and when she wields a baseball bat against the Demagorgon. "That’s my dream for her," Dyer says of Nancy's transformation into an action hero. "I really relish the kind of cool, tough side of Nancy."

Just as they did for Season 1 of the hit series, the Stranger Things writers are still working on the script as the cast is shooting Season 2, Dyer reveals. "Last season, we were more surprised than anybody with how it turned out," she says, meaning there's a major element of excitement and curiosity on set. Adds the actor, "It keeps us on our toes, kind of keeps us surprised... it’s fun, it’s like reading a book; you can’t wait to read the next chapter."

After the Stranger Things Super Bowl spot this past Sunday, fans are more excited than ever to see what Nancy and the rest of the characters' next chapters will look like.