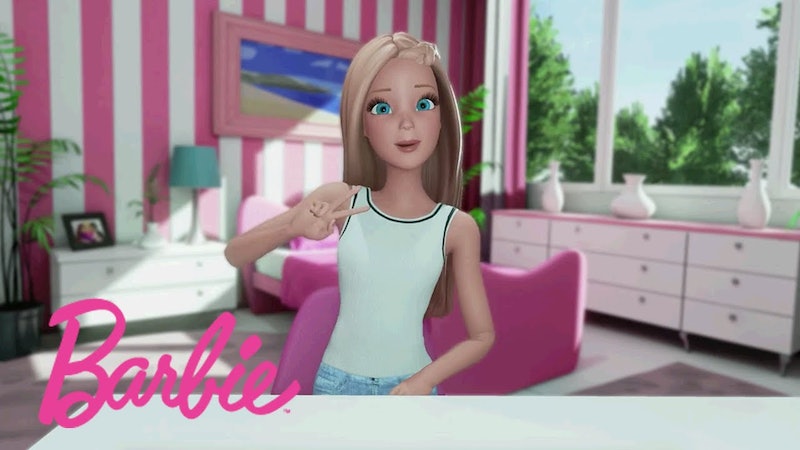 When we were kids, I feel like Barbie dolls' presence didn't seem to reach beyond playdates and dress-up (although I have to admit, six-year-old me really enjoyed that). In recent years, however, the famous doll brand has worked to expand its influence tenfold. Along with promoting body inclusivity and ethnic diversity through its latest dolls, the company has also made headlines with its recent Robotics Engineer Barbie, aimed to inspire girls to pursue careers in STEM, and a Role Model line, which features doll-versions of empowering women from aviation pioneer Amelia Earheart to fencing champion Ibtihaj Muhammad — the first Muslim-American woman to wear a hijab while competing.

Now, Barbie is taking the world by storm with the 60th episode in her YouTube vlog series, in which Barbie teaches girls about the "Sorry Reflex" and encourages them to stop over-apologizing. In the video, an animated version of Barbie opens with a few thoughts about apologies. "I have some ideas about 'sorry'. First of all, I think a lot of people say it when they don't mean it, but I think there's a bigger issue around 'sorry' — especially with girls," she explains. "We say it a lot," she continues. "Like it's a reflex, and that somehow, everything that goes wrong is our fault. Somebody bumps into us and we say 'Sorry!'" As she's speaking, Barbie stands up and mimics stumbling back as if she was bumped into, and then immediately waves her hand up and quietly apologizes.

Barbie explains that for girls and women, it's often the case that expressing feelings of sadness or even speaking passionately about exciting news or projects will be followed by an apology. "I think we're worried about offending people — and we shouldn't be," she says matter-of-factly. After noting the importance of being kind, thoughtful, and offering sincere apologies when we've done something wrong, she asserts that unnecessarily saying 'sorry' is a learned reflex: "Every time we do it, we take away from our self confidence."

In light of this, Barbie proposes a challenge to her followers — making an effort to replace "sorry" with "thank you." "If you feel sad, instead of saying 'sorry,' you say 'thank you for understanding my feelings'," she says, and highlights a few other great examples of foregoing reflexive apologies. "There's so much more power in saying 'thank you' instead of 'sorry.' It really changes the dynamic in a way that you can feel when you do it." With that, she ends the vlog by encouraging viewers to reflect on how many times they say "sorry" throughout the day, and to then try to "turn it around."

This video really struck a chord with me — I think it will for a lot of girls and women. The "sorry reflex" is something that is culturally ingrained in us from a young age. It emphasizes the pressure on girls and women to be polite and contained, putting the superfluous word in front of a request or assertion to avoid any possibility of offense. It starts to feel like we unconsciously mark our words, our contributions, as an inconvenience before they even leave our mouths. Unneeded 'sorrys' tumble from our lips to shield others from perceiving our words as overly-assertive or "demanding," even in the simplest of requests. It can make you feel sort of powerless, and sometimes even eat away at your self esteem.

With all of this in mind, I second Barbie's message. Your words are worthy. Remind yourself of that the next time you feel like you're about to apologize for something that isn't your fault, and instead own your assertiveness. Whether it's a small thing or something you're passionate about, know that speaking confidently and unapologetically holds more power than an unnecessary "sorry" ever will.