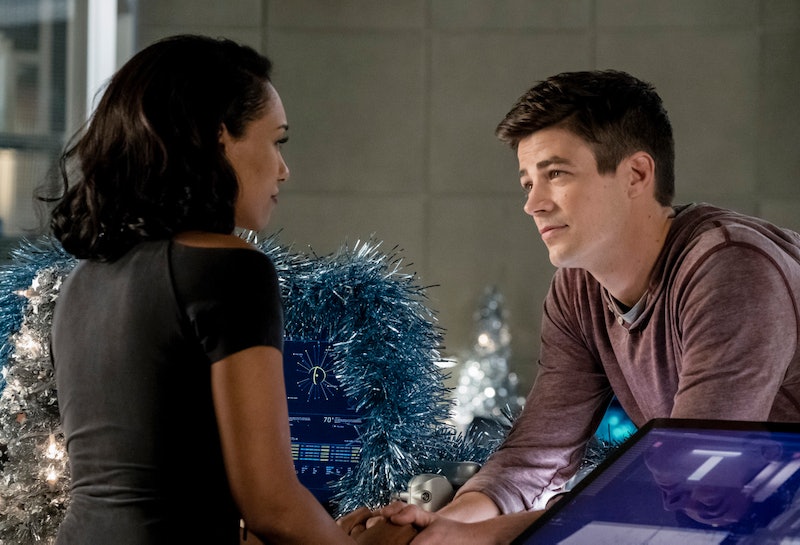 Barry Allen is in big trouble — and for once it's not with the Speed Force, it's with the law. After putting the finishing touches on his plan with the bus metas, DeVoe framed Barry for murder on The Flash winter finale "Don't Run." The episode ended with Barry in jail on The Flash and it could mean the end of Team Flash as we know it. But putting the Flash in jail doesn't appear to have been DeVoe's only goal. The Thinker also wanted to get a new advantage in the form of a brand new body.

Mere hours after Barry and Iris returned from their honeymoon in "Don't Run," Barry is kidnapped by DeVoe. Not only that, but Team Flash loses another member when Amunet returns to abduct Caitlin. Having not one, but two missing team members sends Team Flash reeling. It also puts Iris, the Team Flash leader, in a tough position when Cisco alerts her to the fact that using their satellite to search for two metahuman signatures (Killer Frost and the Flash) is too much. Iris decides that Caitlin, as the most inexperienced meta, is in the most danger and focuses the search on her. Though, in the end, it doesn't really matter who is saved first. The Thinker's plan is already in motion.

It turns out, Amunet didn't kidnap Caitlin to get back at her for what happened at Iris' Bachelorette party. She doesn't want Killer Frost on her side, she needs Caitlin Snow, the doctor, to save the life of a mind-reading metahuman she shot with her metal shards. This mind-reading meta, named Dominic Lanse, is one of the bus metas that Barry helped DeVoe create when he escaped the Speed Force at the beginning of the season. He and Caitlin bond in captivity and later escape with some help from Cisco and Dibny. Unlike last time, however, Amunet isn't willing to let them go without a fight. (More on that later.)

While Caitlin is performing surgery on a bus meta and escaping the clutches of a meta gangster, Barry is caught in DeVoe's secret lair. DeVoe and his wife created a sort of electric cage to trap him there while they work around him, alternating between dropping hints about their plans and threatening his family members. Barry eventually manages to escape, and at one point it even looks like he outsmarts DeVoe, beating him in a battle over Starling City that ends with both of them crashing into the water. Unfortunately, not all is as it seems.

After Barry and Caitlin both safely return to S.T.A.R. Labs, everyone gathers at Joe's house to celebrate Christmas — even Dominic is invited. Barry, however, has to leave when the alarm in his apartment goes off. He speeds over to check on their place only to find it undisturbed — and then his phone rings. Barry shouldn't have doubted his intellect, Dominic tells him over the phone. This new meta isn't Dominic anymore, he's the Thinker. It turns out that DeVoe had hired Amunet to retrieve Dominic for him, a job Amunet completed after Dominic was rescued by Cisco and Dibny. Behind the Christmas tree in Barry's apartment is the body of Clifford DeVoe, bleeding from a stab wound in his chest, a bloody knife laying next to his body. It was a knife given to Barry and Iris as an anonymous wedding gift — one assumes that Barry conveniently left his fingerprints on it. The police knock on the door, and instead of running, Barry lets himself be arrested.

It turns out that the Thinker's big plan this entire time has been to create metahumans, assuming one would earn the power to sustain his own enhanced mind. DeVoe's body is dying due to the energy being used by his mind, but a young, mind-reading metahuman like Dominic has the stamina to sustain the Thinker's mind. At least for a little while. DeVoe implanted his mind into Dominic in "Don't Run," but it's unclear how long this new body will last. Barry noted that DeVoe was especially interested in his powers when he was kidnapped. Perhaps the Thinker wants to harness Barry's stamina and energy to keep this new body alive and healthy.

Whatever The Thinker's plan is going forward, Team Flash is going to have a very hard time trying to stop him without the actual Flash.