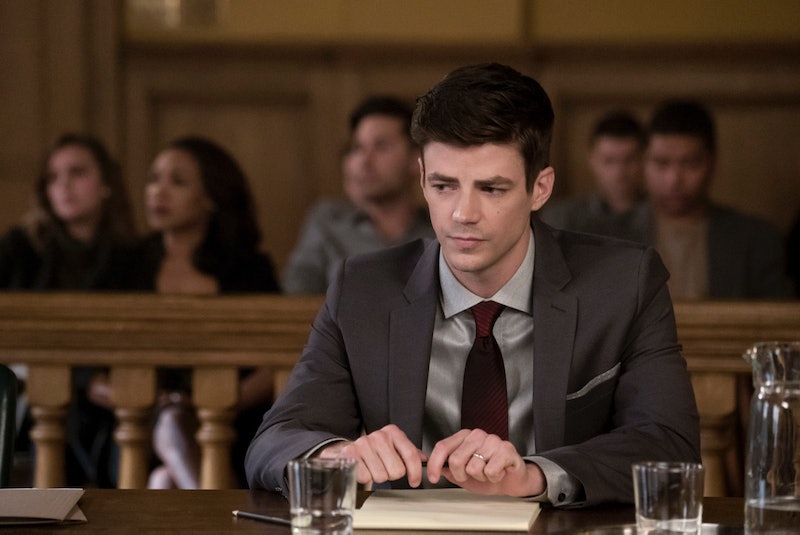 Central City is getting less safe by the second in The Flash winter premiere, "The Trial of The Flash." Since fans last saw Barry and Team Flash, the "murder" of Clifford DeVoe (aka The Thinker) has been discovered, and Barry arrested. He's now wearing an ankle bracelet on house arrest, which is really more of a courtesy thanks to Cisco's technical tampering. Juggling a new wife, a murder trial, and Flash duty is an impossible task, and not even Barry Allen himself can manage. In the end, Barry was sentenced to life in prison on the Flash, and with no Flash to stop DeVoe and fight metahumans, Central City is in more danger than it's ever been before.

If you weren't sure that DeVoe was a genius, then the way he expertly framed Barry for his murder should be enough to convince you. Evidence against Barry includes DNA under his fingernails, the wedding gift murder weapon, and that small detail of a dead body in his apartment. Add in a convincing grieving widow in The Mechanic, and you've got the expert makings of a guilty verdict. With Barry refusing to plead guilty, which means no plea deal or insanity defense, the only way Cecille tells Barry that if he wants a chance to walk free, then he's going to have to testify. Another no-go for Barry, who is afraid of what questions the prosecutor might ask, like, say, why he's always late to work or where he really was those months he was on "sabbatical" in the Speed Force. At the end of the day, Cecille tells Barry and Iris that they have one last play: tell the jury that he's the Flash.

Despite having revealed his secret identity to practically everyone he's ever met, Barry stands firmly against telling his secret to prove his innocence. He knows that if he did come out as The Flash, Iris, Joe, Cisco, Caitlin, and everybody he loves would become a target — even more than they already are. After the Mechanic effectively dodges questions about her new romantic relationship with Dominic (aka the Thinker's new metahuman body), Iris storms into the court room, ready to spill the beans, but Barry stops her. And in doing so, he shows off a brand new power: the ability to move so quickly everyone else stands still except for Iris, who he manages to move at his speed. (Something tells me this will come in handy sooner rather than later.) New cool power aside, Barry's silence leads to one very obvious conclusion: the jury finds him guilty and the judge, unimpressed by his flighty nature (he leaves during closing arguments to stop a radioactive meta from exploding in Central City) and unapologetic demeanor, sentences him to life in prison with no opportunity for parole.

As all fans of The Flash know, nothing is ever permanent, especially when there are multiple Earths and a few superheroes who can travel through time. For now, things look bad for Barry, who has literally become his father — they even have the same jail cell — but things will get better. But as bad as things are for Barry right now, they're worse for Central City. With the Flash locked up behind bars and Kid Flash MIA (Where's Wally is the new Where's Waldo), Central City is more vulnerable to meta attacks. And, while metahumans and criminals keep Team Flash busy, there's nobody keeping tabs on the Thinker and the Mechanic. Who knows what they could do to Central City while Barry is stuck in jail? Especially now that DeVoe has Dominic's mind reading powers. He's practically unstoppable — at least, for now he is.

Barry better get out of jail fast, because otherwise, who knows what Central City will look like when he finally returns.