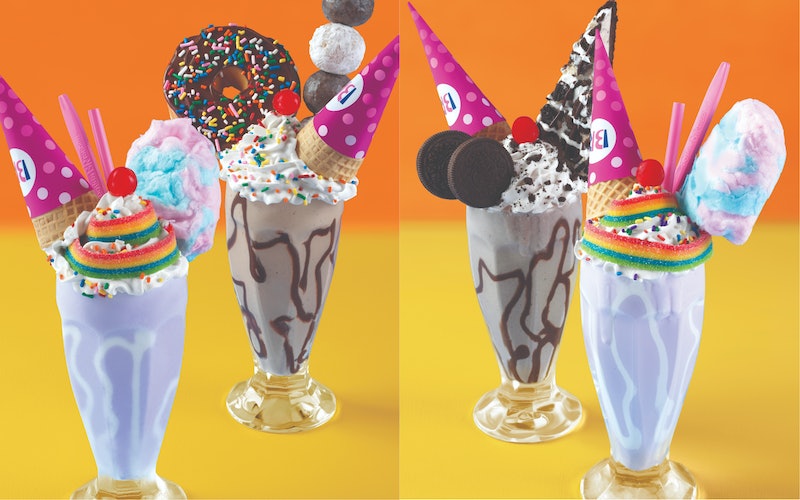 Courtesy of Baskin-Robbins/Remixed by Bustle

Baskin-Robbins is going all out for National Ice Cream Day this year — it's July 15 — with some really extreme milkshakes. For a limited time, Baskin-Robbins will offer Freak Shakes, which are perfect for anyone who wanted one of those giant candy-covered milkshakes that went viral, but were previously unable to get their hands on one. Plan your Instagram posts accordingly, the time has come.

According to a press release from Baskin-Robbins, the shakes will be available from July 15 until July 31, and there will be three options to choose from.

To anyone who thinks their sweet tooth is impressive enough to conquer this majestic beast, I salute you.

Next, there is the Oreo 'n Cookies Freak Shake, which will be available at participating Baskin-Robbins standalone restaurants. Now I know what you're thinking: How can it be Oreo 'n Cookies if Oreos themselves are cookies? Well, the answer seems to be that there are just a heck of a lot of Oreos involved. The Freak Shake is:

If you're wondering what Oreo Polar Pizza is, it's a brownie crust topped with ice cream and a whole bunch of other stuff, including crushed Oreo pieces. So, the Oreo 'n Cookies Freak Shake is topped with something that itself is topped with Oreos. This thing is like an Oreo fractal and, quite frankly, it's intimidating.

It's topped with doughnut holes and an entire doughnut. How does it not tip over? How many people can you reasonably share it with? Should you even attempt to leave Baskin-Robbins with it, or is it best to move it as little as possible? All these questions and more can be answered on July 15.

There's a lot to look into if you're an ice cream fan this month... or doughnut fan... or candy fan. Basically, if you like very sweet things, you're all set.