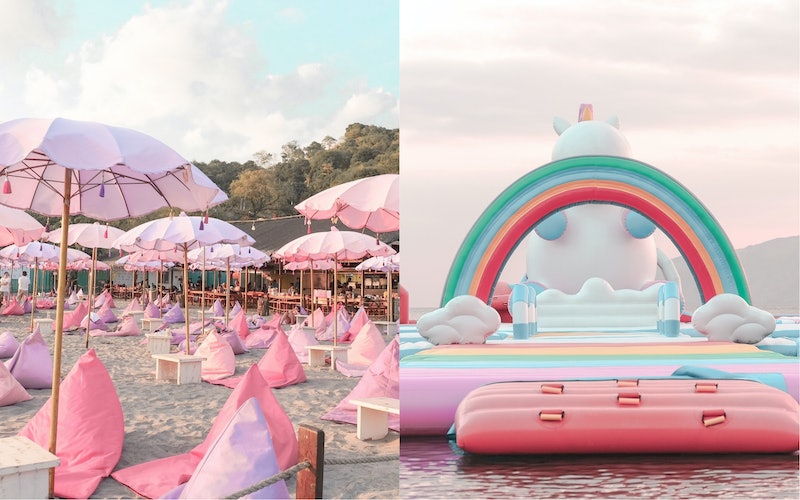 Excellent news for anyone who embraces whimsy as a way of life: Unicorn Island is real, and you can actually go there. Part of the giant floating playground known as the Inflatable Island, Unicorn Island is in the Philippines; it’s located on the Subic Bay in the Zambales province. And now that I know it exists, I have never wanted to visit anywhere else this much in my life.

The Inflatable Island is a relatively new attraction; it first opened at the beginning of April 2017 (that is, just about a year ago), billing itself as “the biggest floating playground in Asia.” At the time, it covered 3,400 square meters (about square feet 36,597), or an area roughly the size of eight basketball courts placed next to each other. As you might imagine, there was plenty to do spread out across that space; the main map included 15 inflatable, floating obstacles ranging from a wobbly bridge to a “human launcher” (yes, really), all connected with pathways made from more inflatables.

Now, though, Inflatable Island covers over 4,100 square meters, or around 44,132 square feet — all thanks to the Unicorn Island expansion. In addition to all the obstacles that already existed on the main Inflatable Island, Unicorn Island, which just opened, adds another six obstacles to the list: Baba’s Super Slide, Slippery Slopes, the Rainbow Walk, Mini Jump and Fly, Climby the Seaunicorn (which looks kind of like a giant inflatable narwhal) and the Wavy Dinosaur. It’s located in the northeast quadrant of the playground, separate from the main Inflatable Island, but easily swimmable from it. Unicorn Island is also a little closer to the shore, as you can see in this image from Instagrammer Daryll Sallan.

For the curious, here’s an aerial view of all the inflatables:

The big blue thing to the left of the Rainbow Walk is something called the “Floating Cinema.” I’m not sure exactly what’s showing on the screen, but to be honest, that’s kind of secondary. I’m still too busy marveling at the fact that there is a FLOATING CINEMA OFF THE COAST OF A PLACE CALLED UNICORN ISLAND.

Lest you worry that the obstacles on Inflatable Island aren’t challenging enough to make it worth it… well, that doesn’t seem to be the case. Indeed, when blogger and vlogger Aileen Adalid visited the place with her friends shortly after it opened, she found that the original map was actually too difficult for her to complete. She said she still had loads of fun, though — and I suspect that Unicorn Island’s smaller scale might make it a little friendlier for the less athletically inclined. (Me. I'm talking about me.)

The Bali Lounge, by the way, is no longer the rainbow-hued hangout spot it was when Inflatable Island first opened; now it’s the Pink Bali Lounge. The concept is still the same — it’s a place to relax on the beach and grab some food and drinks (no outside food or beverages are allowed, so here’s where you go if you get peckish while you’re exploring Inflatable Island) — but the lounge chairs and umbrellas are all decked out in shades of pink, purple, and fuchsia instead of in all the colors of the rainbow. Between the décor in the lounge and the general unicorn theme, Inflatable Island is really leaning into the millennial demographic right now:

Want to visit Inflatable Island? Good news: Once you get to the Philippines, it’s pretty affordable. As of this writing, prices range from P499, or about $9.50, for a one-hour slot to P899, or a little over $17, for a full day; you can also get discounts for full-day, half-day, and two-hour passes if you book online in advance. Additionally, beach-only passes are available for people with disabilities, senior citizens, and/or 30 percent of your party (so, if you’re a group of three and none of you have disabilities or qualify as a senior citizen, one of you can get a beach-only pass if that’s your jam) — although not that, according to the Inflatable Island FAQ, beach passes aren’t a guarantee; they “can get sold out at anytime,” apparently.

Since Inflatable Island is located right off the shore, the water doesn’t go terribly deep; it ranges for four feet to 15 feet, though, so life vests are required, and it’s recommended that anyone who wants to visit knows how to swim. There are life guards on duty at all times, though, and life jackets are provided for the island itself, paddle boarding, and other water activities (although not for the swimming beach).

There are, of course, a few stipulations for use, according to the Inflatable Island FAQ: You’ve got to be at least three feet tall to explore the Inflatable Island; kids between three and four feet tall require a 1:1 kid-to-adult ratio; and you can’t wear any jewelry, clothing with zippers or buttons, or other sharp items while you’re bouncing along. (Nothing kills an island made of inflatables like a puncture from an errant earring.) Other than that, though, you can wear just about anything; swimsuits are the obvious choice, although Inflatable Island recommends donning rash guards and swim leggings as well. When you’re on the shore, you can wear whatever you like.

Aileen Adalid has plenty of info on how to get there, where to stay, and other useful travel tips for visitors to the Inflatable Island; additionally, Inflatable Island’s own website has just about everything you need to know on it (including the fact that you can have a birthday party there if you want to). If you go, I just have one request: Take me with you!