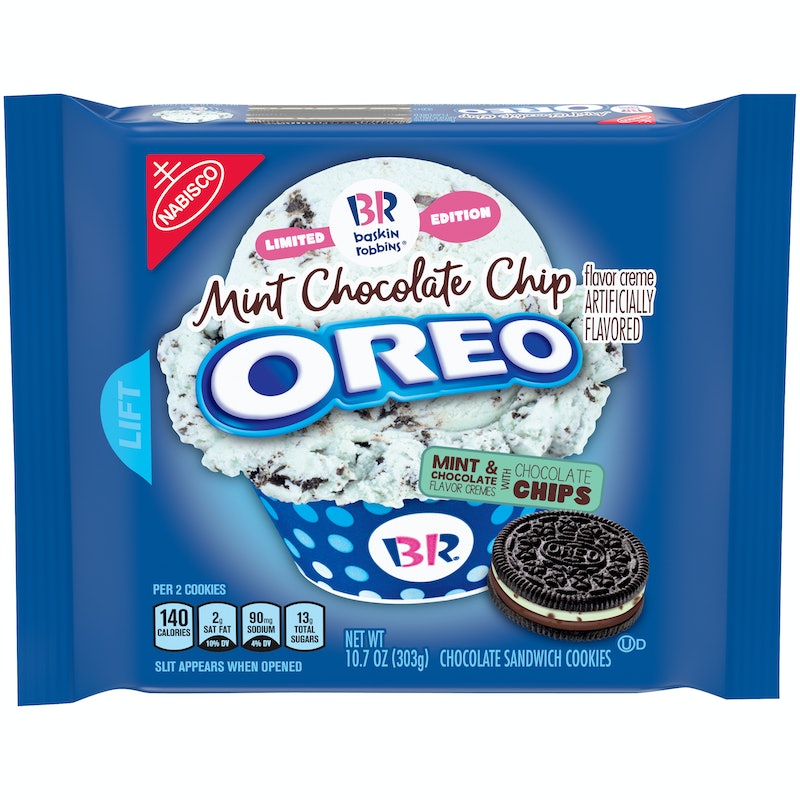 Oreo is always coming out with new flavors (and new... depths?), and there's about to be something special for ice cream fans. Oreo and Baskin-Robbins are teaming up for Mint Chocolate Chip Oreos, which have both mint creme and chocolate creme. Oooh. Aaaah.

The new Oreos will hit shelves in mid-July, because what better way to cool off on a hot summer day than with the cooling sensation of mint-flavored creme? OK, there are a lot of great ways, but if you are into Oreos and mint chocolate chip ice cream, then these could pair well with an evening sitting in front of a fan while marathoning TV shows.

Rumors about these particular Oreos have been around for quite some time now. Delish reported back in December that Mint Chocolate Chip Oreos were coming, according to a post shared by food Instagrammer markie_devo. At that time the flavor wasn't confirmed, but a mockup of the packing they shared looks very similar to the actual product.

While the Mint Chocolate Chip Oreos are new, there has already been a similar flavor available: Mint Oreos, which comes in regular and Oreo Thins versions. In fact, in a ranking of Oreo flavors, Time Out said that Mint Oreos brought to mind the Baskin-Robbins Mint Chocolate Chip ice cream flavor. As for another minty flavor, the brand also released Peppermint Bark Oreos last holiday season.

In addition to the Mint Chocolate Chip Oreos, Oreo also announced other flavors that are coming out this spring and summer. First, as of Monday, May 13, S'mores Oreos are back in stores as a limited-edition flavor. This had also been rumored for some time, but the date they would return was unknown. The S'mores Oreos feature graham cracker-flavored cookies with marshmallow and chocolate-flavored creme.

Next up are Latte-flavored Oreo Thins hitting shelves in June as a permanent Thins flavor.

June will also see the release of Marshmallow Moon Oreos, which are in honor of the 50th anniversary of the Apollo 11 Moon landing. These limited-edition Oreos will have special designs on the cookies, which will be filled with purple marshmallow-flavored creme.

Lastly, Oreo announced its flavor for the end of summer: Maple Creme Oreos. Another limited-edition flavor, these ones will have golden Oreo cookies with filled with maple-flavored creme, and will be available starting at the end of August.

These are a lot of different Oreos to look forward to, but knowing all these flavors are coming won't stop dessert fans from seeking out what's next. There are Instagram accounts and websites dedicated to sharing rumors about upcoming sweet treats, and since Oreo always has something new on the horizon, the search for the brand's inevitable fall and winter flavors won't be far off. Maybe another Baskin-Robbins collaboration is in the future, too.