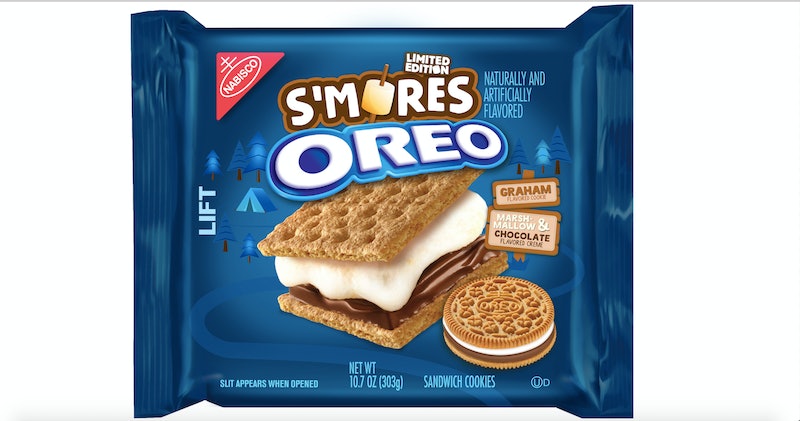 You’ve heard the rumors — and now, I’m pleased to tell you that they’re true: S’mores Oreos are returning for the Spring 2019 season. Ready the kindling! Grab some marshmallows! Get that campfire going! After three years without them, the graham-, chocolate-, and marshmallow-flavored cookies are galloping back into stores in April. Two words: Heck. Yes.

Whispers that S’mores Oreos would be making their triumphant return have been floating around for a few months now. Food Instagrammer the Junk Food Aisle posted about the possibility back in January; “S’mores Oreo is coming back in 2019!”, the post read. “Last spotted in 2016, S’mores Oreo features a graham flavored cookie and layered marshmallow and chocolate flavor cremes.” Interestingly, the packaging looked a bit different than it did during the cookies’ last outing in 2016 — but that was the only bone we’d been thrown at the time. Then, Instagrammer Candy Hunting put up a post just a few days ago noting that S’mores Oreos already had a page on Walmart’s website ready and waiting — and when Bustle reached out to Nabisco’s parent company, Mondelez International, we received word that it’s true: S’mores Oreos are coming back! Soon. And with new packaging, to boot!

S’moes Oreos feature graham-flavored cookies with two kinds of crème inside each one — chocolate on the bottom of the sandwich and marshmallow on the top. Like the last few times we’ve seen them, they’ll be limited edition — so you’ll have to act fast if you want to stock up on them. They’ll be available at most retailers who carry Oreo cookies starting in April 2019.

S’mores Oreos made their initial debut in 2015 to much fanfare. As you might expect, reviews of the special edition cookies varied; most people liked them, leading to an overall positive reception, but some questioned whether they really tasted like S’mores or not. As one reviewer for BuzzFeed underlined, though, maybe the accuracy isn’t the point: “I don't know how much it tastes like a s'more, because it's a cookie,” they wrote, “but whatever it is, I love it.”

Still, though, virtually everyone who came in contact with them — even just tangentially — had the same question: Why aren’t they called S’moreos? It’s a question with which we continued to grapple when the Oreos returned during the warmer months of 2016 — and even though that was the last we saw of them for some time, the conundrum has never been far from anyone’s mind. Or at least, it hasn’t been far from the minds of anyone who spends perhaps an unhealthy amount of time thinking about Oreos.

Anyway, now — three years later — they’re coming back, and we get to wonder why no one at Oreo HQ ran with that glorious portmanteau all over again.

According to Junk Banter, S’mores Oreos were the very first Oreo flavor ever released that had neither chocolate nor golden cookies on either side of the crème. The graham-flavored cookies were new for these babies, and clearly they were a notable invention: They have since reappeared in several special Oreo flavors, most of which have been themed after other baked goods — specifically pie. Apple Pie Oreos? Those had graham cookies. The same goes for Key Lime Pie Oreos. Peanut Butter Pie Oreos, too. Basically, if it’s pie-flavored, it probably uses graham cookies instead of chocolate or golden ones.

S’mores Oreos may be a more standard use of the graham-flavored cookie, but I’m not mad about it. And hey, if you’re feeling really ambitious, you can always try to use S’mores Oreos to make actual s’mores. Look for ‘em starting in April. Bon appetit!