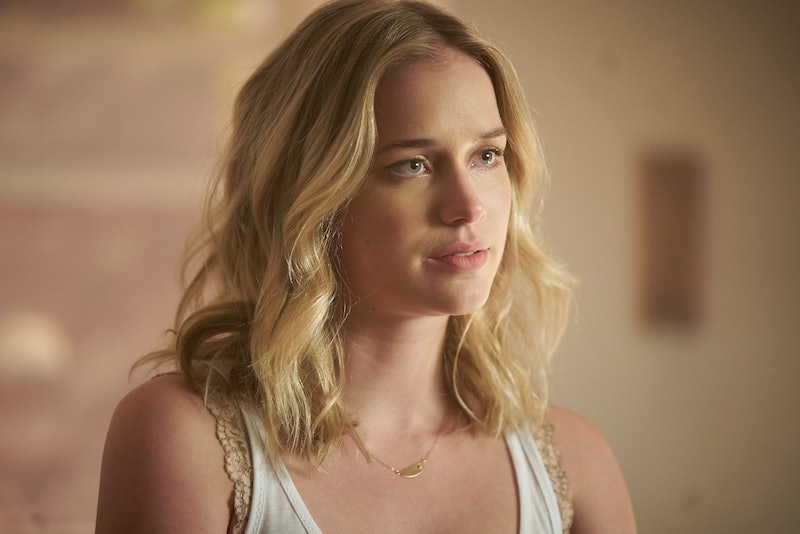 Spoilers ahead for You Season 2, Episode 2. People don't like to believe that their favorite characters are ever actually dead on TV. So many twists do result in characters not being dead after all. But Beck definitely died on YOU no matter what theories are out there. The book confirms it, the actors have confirmed it, and Season 2 definitely confirms it. Beck returns in YOU Season 2, but just for an episode in a vain attempt to show Joe the price of his actions.

The "Beck isn't dead" theories mostly stemmed from viewers having not seen a body. Those theories were bolstered by the fact that everyone thought Joe's ex-girlfriend Candace was dead but then she showed up very much alive in the Season 1 finale. However, there's no doubt after Beck's appearance in Season 2 that Joe did kill her. Beck returns as sort of a ghost to haunt Joe in the second episode of Season 2. She first appears when Joe starts to get closer with Love, and Beck continues to come back when Joe begins losing blood from having his finger cut off. She's nothing more than a hallucination, but she's very real to Joe who is confronted for the first time by exactly what he did to her.

Beck wears a scarf for most of the second episode. When she takes it off for the first time, both the viewers and Joe can see the marks on her neck that reveal that Joe strangled her to death. That's how Beck also dies in the book, and it's a very graphic scene. Actor Penn Badgley, who plays Joe, told Entertainment Tonight that viewers were "sort of, for better or worse, mercifully saved from seeing that in the first season."

However, perhaps in an attempt to quell speculation or just to force both viewers and Joe to accept the reality of what he's done, viewers get a hint of the full brutality of Beck's death in Season 2. "You hurt me," she says, unwrapping her scarf to show Joe that he didn't just emotionally hurt her, he hurt her. It's Joe's killing of Beck that really helps Badgley accept that his character is not a good guy — despite even famous fans like Millie Bobby Brown defending some his behavior.

"That always haunts me, thinking of Beck," Badgley told ET. "It's like, 'You really did that in the first season, and we're still going, and people really like this guy?!' That's disturbing." But while Badgley can accept Joe's true nature, Joe obviously cannot. Badgley told ET that Joe doesn't even consider Beck dead in his mind. "I'm not giving you some kind of spoiler, she's dead [but] in his mind, everyone's still alive because the pain that he feels he suffered at their hand is very much still alive."

The one who really suffered at Joe's hand was Beck, which frustrated Elizabeth Lail, the actor who played her. She told Vulture that she wanted there to be "some heroic justice at the end" for Beck, but that she understands why it had the ending it did. "It's more true to life that she does die, unfortunately. It's more likely that someone would die in that situation," she added.

Originally, Lail didn't know if she would be in Season 2. She told the Radio Times that she was "sad" to not be able to continue the show's journey into Los Angeles for Season 2. However, she later told the podcast Chicks in the Office that she was "so grateful to have been a part of it at all," adding that "it's kind of an actors dream, because you can do it and then you move on to the next thing." And just as Lail in real life put Beck behind her, Joe has attempted to do the very same thing on the show.

In Season 2, Joe is only haunted by Beck's ghostly return for a moment. He initially tries to explain to Love that he's afraid of hurting her like he'd hurt Beck, but Love brushes it off. She says there's always a risk of being hurt in relationships. Clearly, she doesn't know what kind of "hurt" Joe means. But with Love on his side, Joe burns a piece of paper with "Goodbye, You" written on it. It's his way of letting Beck go, and he briefly apologizes. "I'm sorry. I really am," he tells Beck in his head before quickly moving on to his future with Love. "Still can't wait to tell our story to our kids," his inner monologue says, meaning his story with Love. He's forgotten Beck as quickly as she came back, writing her off with a quick, "The past is prologue."

It's clear that Joe hasn't really understood what Beck's reappearance was supposed to teach him. Even as his monologue says he plans to learn from his "mistakes," he steals a pair of Love's underwear and hides it in a box in his wall just like he did with Beck. He's learned nothing.

More like this
Does 'Locke & Key’s Ending Mean There Could Be A Season 4?
By Sophia Moore
Pete Davidson Runs To Shower With Kim K In 'The Kardashians' Season 2 Trailer
By Jake Viswanath
'Yellowjackets' Just Announced Who’s Playing Adult Van & It’s Perfect
By Gretchen Smail
'The Capture' Is Finally Back – & S2 Looks Tense AF
By Sophie McEvoy and El Hunt
Get Even More From Bustle — Sign Up For The Newsletter