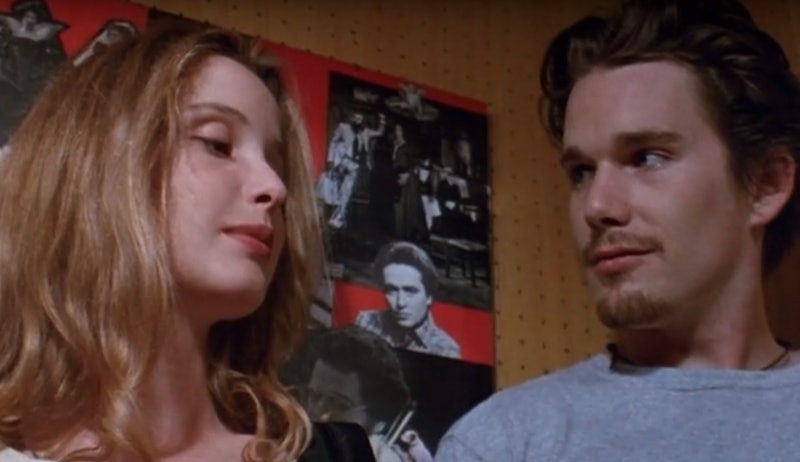 That feeling you get when you meet someone special, that cosmic fizz that fills your entire body, it's difficult to put into words. It's even more difficult to express visually. And yet, Richard Linklater's Before Sunrise is the perfect cinematic expression of that feeling, and it's one of the reasons you should watch this '90s classic on Valentine's Day.

Following Céline, a young French woman played with remarkable charm and ferocity by Julie Delpy, and Jesse, a young American man played with wit and magnetism by Ethan Hawke, Before Sunrise is a minimalist masterpiece about a fleeting romance. After the two meet on a train and form an instant, irrevocable bond, they agree to spend the day traveling together in Vienna. And that's pretty much it. This 1995 movie is a story in which the only action is the mounting connection between a pair of young lovers and where the only conflict is the deadline that romance holds.

The two walk and talk around Vienna — they eat together, share their secrets, listen to music, gaze adoringly at one another, and enjoy comical disagreements — and they do so under the conceit that this will be the only night they'll ever spend together. In a moment as infuriating for the viewer as it is oddly poetic, when they go their separate ways, they agree not to swap contact information or to stay in touch. Instead, they agree to meet at the same spot in six months' time.

As naive as it is romantic, the decision epitomizes the odd whimsy and youthful abandon of the film. Spoilers ahead. Ultimately, Céline and Jesse make a powerful connection. It's possible they even fall in love. But they both recognize the madness of the pace at which their romance has developed and acknowledge how difficult it would be for a real relationship to live up to the ideals of such a night. Why ruin something so magical with something real? The movie features an open ending, which leaves the audience free to judge whether the couple manage to rediscover each other in six months or not.

In an 2013 interview with the Film Society of Lincoln Center, Linklater called Before Sunrise a movie simply about "two people connecting," and added how "in real life, that is a very verbal, conversational event," which is why the movie itself is also a very verbal, conversational event. "Nothing great happened in the movie other than this connection. I just remember wanting to make a film just about that," he explained. And it achieves exactly that.

Though little more is happening in the movie besides some stirring conversation or the occasional physical gesture, Before Sunrise nonetheless maintains a truly thrilling momentum. The movie flows with such a breathless pace that it's perfectly evocative of that first rush of love — the sleepless hours spent admiring even the smallest of details of someone you're utterly enthralled with.

Yet somehow Before Sunrise, just like Céline and Jesse, never quite fully gives itself up to the "happily ever after" ideal of love that we probably all secretly want. The movie and its characters are realists, and as a result, Before Sunrise acts as a cinematic litmus test for its audience. It has the power to make the romantics among us believe that Céline and Jesse do meet up in six months time and live happily ever after. Or it makes the cynics believe that one, both, or neither of them show up at that train station six months later to give their relationship a chance.

It's worth adding that Before Sunrise wasn't the end of Céline and Jesse's story. In 2004, Linklater returned the couple to the big screen with Before Sunset. In addition to confirming that the two didn't meet up again in six months as promised (cynics rejoice), the movie also showed the couple older, wiser and more cynical, but with just as deep a connection as they enjoyed in the first movie. By the time that 2013's Before Midnight rolled around, the two were a fully fledged couple, and as a result, faced the often difficult realities of every other couple. The connection was still there, but the magic had been ruined by reality.

As a standalone movie though, Before Sunrise has everything anyone could want from a love story. If you believe in bold romantic gestures and happily ever afters, then Before Sunrise is the first act of a fairytale told in slow motion — one that allows for you to fill in the rest of the story yourself.

And if you're not feeling exactly loved-up this year, then Before Sunrise can be read as the complete opposite, showing the fleeting and often disposable nature of all those fuzzy feelings that we hold in such high regard. However your heart feels, Before Sunrise is the perfect valentine for it.