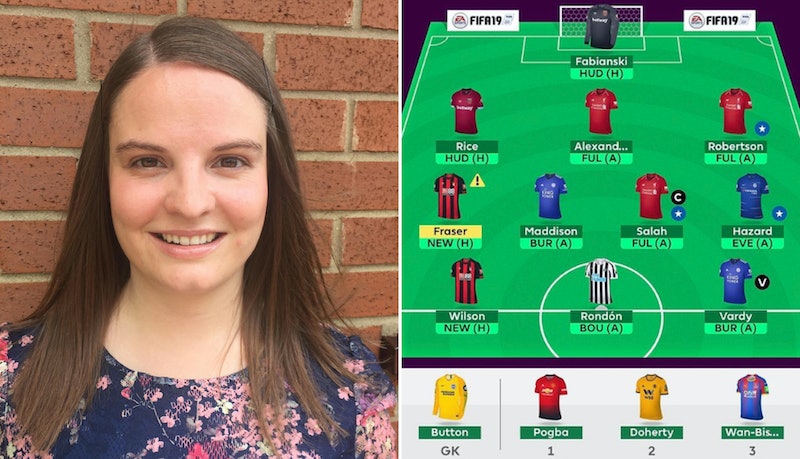 As a little girl, I always loved football. Many a Saturday afternoon was spent watching BBC’s Grandstand with my Dad while my Mum was at work. When I was 10 years old, I was allowed to enter a national newspaper Fantasy Football game and, from then on, I was hooked. The summer holidays were spent constructing my team, trying to cover all the big clubs while also getting the best value for money. And once the season commenced, I diligently checked the scores on Ceefax. In 2001, we got the internet in my house, meaning I could refresh the BBC Vidiprinter over and over again to find out the live scores, including which player got the all-important assist.

So, as you can see, I was destined to be a Fantasy Football enthusiast.

My affinity with football wavered slightly during my time at university when I started going out with a man who had little interest in the game. That man would later become my husband. However, after graduating from university with a degree in Mathematics and becoming a teacher, I was drawn back in. When the FIFA 2014 World Cup rolled around, my colleagues encouraged me to join their Fantasy Football game, and I decided it sounded like fun. My mathematics background helped me to pick up the game quickly, studying bookmakers odds and transferring probabilities of goalscoring events to make informed decisions. I dove into the world of Twitter and blogs, reading all the Fantasy Football tips I could. Things soon escalated from a friendly workplace rivalry into something a lot more competitive. I started beating all the men at work by a country mile, and they were less than impressed in the staff room by the end of term. After that tournament ended, I never looked back.

I started beating all the men at work by a country mile, and they were less than impressed.

It didn’t take long for me to master the art of the Fantasy Premier League (FPL) game, and I quickly turned from user to provider, sharing Fantasy Football tips with others. I started off anonymously, but eventually built up the courage to change my handle to 'FPL Holly' with a cartoon caricature profile picture of myself. There were plenty of comments made, and not all of them pleasant. “What do women know about football?” was one. Luckily, there’s lots of good kind-hearted people in the Fantasy Football community, and respected accounts had my back when it came to keeping the trolls at bay. Soon, however, my Fantasy record and content preceded these preconceptions, and the negative comments became fewer and fewer.

After a couple of seasons on the FPL circuit, I somehow slipped into blogging and, from there, came up the idea of Fantasy Football Community: a platform which collates all the engaging content that the FPL community produce, week in, week out. The website was a niche site in a saturated market, as it was one of the few places acknowledging the length and breadth of the Fantasy Football content mill. It quickly became a hit, with plenty of support from the internet friends I’ve made along the way.

There were plenty of comments made, and not all of them pleasant. “What do women know about football?” was one.

Since then, my hobby has gone from strength to strength, and has become more of a part-time business. Growth in the last year has been phenomenal: I branched out to cover the FIFA 2018 World Cup, joined the Premier League’s panel of experts as the only female pundit, and have even made guest appearances on the Fantasy Premier League show, which is broadcast live worldwide on Thursday evenings. It’s been an absolute blast. I’m now looking ahead to the FIFA 2019 Women’s World Cup Fantasy game.

In the Twittersphere, I’ve created a close bond with many other females involved in the Fantasy industry, and have become a part of the highly competitive Rebel Girls competition. I currently rank 5th among the roughly 150 people involved in that league.

This season, I finished in the top 10,000 of the FPL out of 6 million managers. Establishing a reputable profile in the Fantasy Football industry comes with a lot of responsibility. Negativity towards female Fantasy players is still prevalent, despite barriers that have been broken down in female football thanks to the Women’s FA Cup and World Cup’s being televised on mainstream TV and female presenters anchoring primetime football shows.

For me, the ultimate breakthrough would be to see a female player crowned winner of the FPL game. There’s been some excellent players over the years, with some successful top 10 finishes, so I’m hopeful it will happen one day, despite female players making up just 5 percent of overall users right now, according to David Wardale’s Wasting Your Wildcard: The Method and Madness of Fantasy Football. The complex nature of the game, which involves multiple variables and an element of luck, make it extremely tough to reach that elusive first position. Reaching it myself is something I can only dream of right now.

I want my daughter to know that she can be anything she wants to be, regardless of her gender.

I’ve recently given birth to a baby girl, and that's really changed my perspective on things. My main focus right now is to inspire my daughter and make her proud of me. I don’t mind if she takes after her father and doesn’t like football, but I want her to know that, when she grows up, she can be anything she wants to be, regardless of her gender. She’s already made her first TV appearance on the Fantasy Premier League show at just 3 weeks old, so the sky’s the limit for her.

For me, my Fantasy Football journey has evolved from hobby to obsession to a business. I love the challenge of balancing statistics with observed knowledge through watching the game. I eat, sleep, and breathe it, spending hours absorbing articles, tweets, podcasts, and videos about the topic. It’s an ever-changing environment that encompasses my two greatest passions: maths and football. I’ve met a diverse range of people through playing the game and have made lifelong friends. I’m excited to see what the future holds in the next stage of my Fantasy journey.