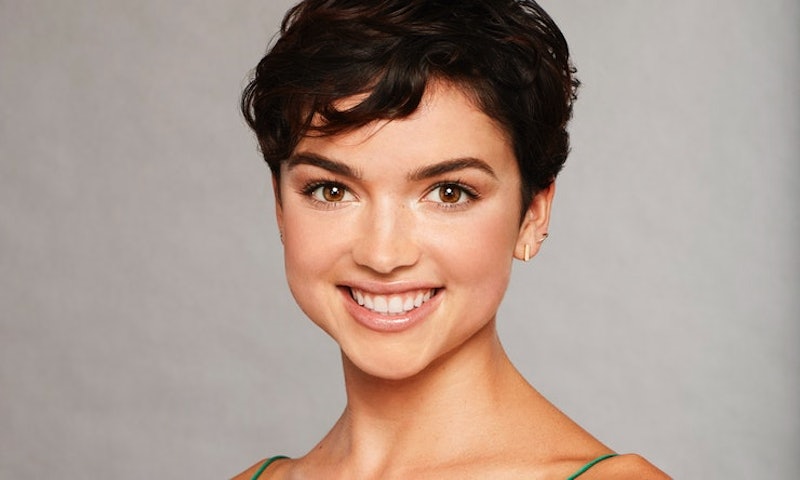 Of all the 29 women in the Bachelor mansion looking to get Arie's final rose, Bekah seems to be the one that's been getting the most attention lately. Bekah's Instagram post about her armpit hair may be what's been getting her the most attention right now, though she quickly let all of her followers on the app know that there are much bigger issues to worry about than whether she shaves or not.

The Bachelor contestant took to her Instagram Story on Saturday morning to post a photo of her armpit hair, attaching a poll that asks her 36,000 followers if she should shave or not. The photo reads, "to shave or not to shave?" The poll's two options include: "I <3 the patriarchy" and "all natural, baby." But to be sure that her photo didn't ruffle any feathers, the 22-year-old quickly followed that up with another photo of herself post-shower that read:

"jk ladies, no shame! if smooth pits make you feel pretty, do it. if you don't mind the hair, do it."

But, of course, it didn't end there. Because this contestant from The Bachelor (senior producer: Lindsay Liles) used her most recent Story to talk about her body hair a little more while making an important point about feminism and women's issues as a whole. In a follow-up Instagram video, she said,

"You know, the whole shaving/not shaving debate is really kind of irrelevant. It's definitely just the essence of white feminism, because if we want to talk about real problems like the systematic oppression of women of color..."

Since videos in Instagram Stories can only be so long, the clip is cut short before Bekah is able to finish her sentence. Oddly enough, she didn't follow that video with a second video to finish making her point, but to be honest, it's really not needed because we all pretty much get the gist of what she was saying — and she's totally not wrong for saying it.

That's certainly not the first time she's used her platform to show the world how proud she is of her armpit hair. In June 2017 — way before the world knew her as the first Bachelor contestant with a pixie cut — she posted an Instagram photo in which she proudly displays her pits alongside a caption that read, "am i a good feminist yet? (all you haters will be happy to know i got them waxed last week)."

Of all the comments underneath the post, only one user commented, "NOOOOOOOOOOOOO." Hopefully Bekah made the decision to eventually wax her armpits only because it's what she wanted to do, not because someone made a comment about her not doing it.

It's always refreshing to see women embracing their body hair and deciding for themselves whether or not they want to remove it — after all, these "rules" about women shaving were put into place by a patriarchal society with harmful expectations about what it means for women to beautiful. And it's even more comforting to see this sort of thing being discussed by a Bachelor (supervising producer: Deborah Read) contestant, seeing as most of the women who've been cast on the show in past seasons have all been pretty, uhhh, similar, for lack of a better word.

Still, Bekah's armpits and the question of whether she should shave them really isn't the point, and it's just as irrelevant as she claims it is in her Instagram video. Just because a woman chooses to shave, wax, or remove her body hair in any way doesn't mean that she can't also identify as a feminist. On the flip side, making the decision not to shave doesn't automatically make you a feminist, especially if you don't also believe in the simple idea that women and men should be treated as equals.

The conversation surrounding body hair is one that's valid to have, though it is worth admitting that there are also way more important issues at stake that everyone really needs to be paying attention to, as Bekah makes clear.