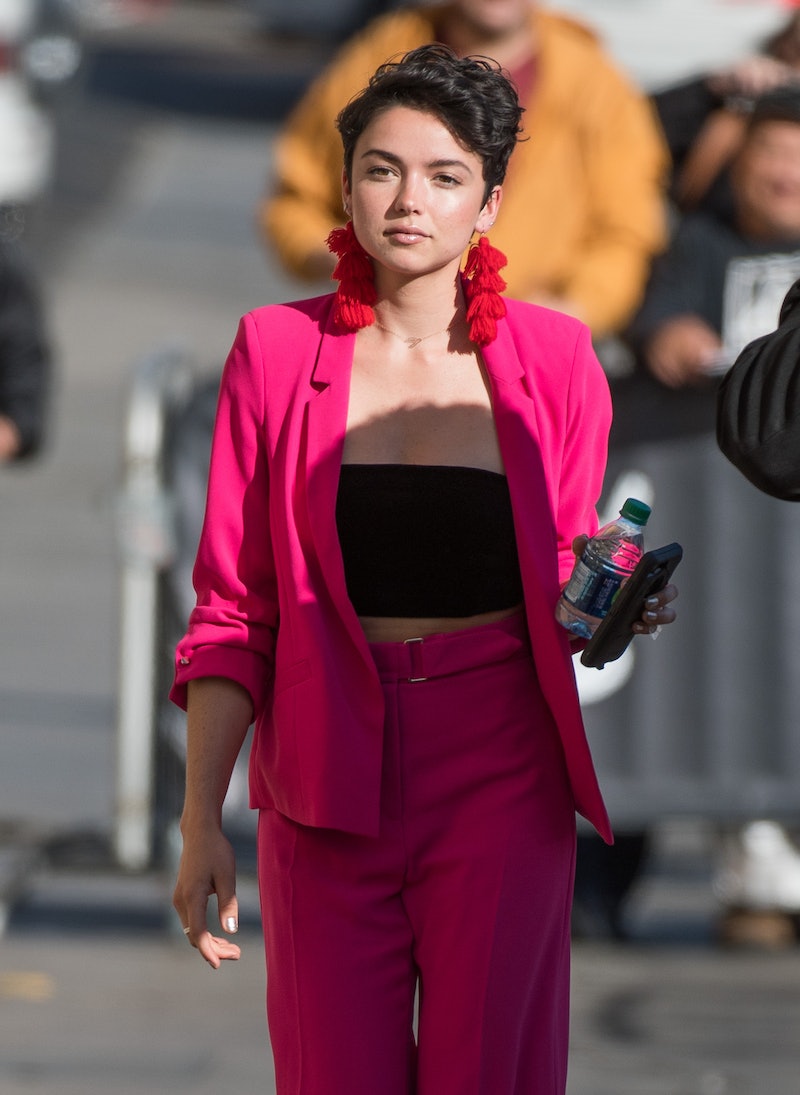 In the midst of nationwide protests against police brutality in the wake of George Floyd's death, former Bachelor star Bekah Martinez slammed Garrett Yrigoyen for his "Blue Lives Matter" posts on social media, which has sparked a passionate debate among several members of Bachelor Nation. The debate started on June 5, when Garrett shared a lengthy statement on Instagram, writing that he stands in solidarity with "hundreds of thousands of men and women of all races that represent this Thin Blue Line."

Because he has "friends and family in law enforcement," Garrett stated that "it’s important for me to recognize the ones who ... put their lives on the line each and every single day for humans of different race and ethnicity, including those who hate them." In his post, he also claimed that "there have been over 300 [officers] injured, shot, or killed in just one week," though he didn't offer a source for that statistic. "We can’t judge an entire group of people by the actions of a few," he said, before asking followers to "remember" the officers at this time.

In response, Bekah slammed Garrett's statement in a comment on his post, writing that "law enforcement CHOOSES to put on a blue uniform. Black people don't choose to be black. big difference." She also took particular issue with the Garrett's argument that police become more "on edge" when they are faced with "brutality" from protesters, claiming that statement is "scary as f*ck." Bekah concluded her comment by writing that it was "interesting" that Garrett was "silent about black lives, but you HAVE to speak out about cops."

"You've made your views known before and here's a great reminder that not much has changed," Bekah concluded, referencing his history of liking racist, misogynistic, transphobic and offensive posts on Instagram. (Garrett apologized for his controversial social media activity in 2018, when Becca Kufrin's season of The Bachelorette was airing.)

Garrett then shared a screenshot of Bekah's comment on his Instagram Story, where he claimed that the Bachelor contestant told his fiancé, Becca, "how much you loved me," and that she admitted she "made a mistake for judging me in the past without knowing me." He then wrote that Bekah "never got to know me, still don't know me and you're no longer invited over." The Chatty Broads host then sent Garrett a DM, telling him that those were "definitely not my words."

"I told Becca, 'Tell Garrett I'm sorry I have him so much sh*t' and at the time I meant it because I thought you actually cared about changing," she wrote in her message. Bekah also followed that up with a post on her own Instagram page, where she asked people to "stop comparing the experience of a chosen career to the experience of being black." She continued, "Being black is not a uniform you can remove on your days off, it definitely does not protect you from the justice system, it is not something you get PAID to be, and it is most certainly not something you can quit or retire from."

"You can love a cop, marry a cop, have a brother who’s a cop...and you can still hate the Blue Lives Matter movement and what it represents," Bekah wrote, though she clarified in the comments that she "doesn't hate cops," but believes the "Thin Blue Line" flag undermines the Black Lives Matter movement. "You can choose to support cops AND understand that the 'thin blue line' flag now represents and signals BLUE LIVES MATTER to the majority of the population," she wrote.

Bekah then took one last dig at Garrett, revealing that she made a $1,000 donation to the National Police Accountability Project in Garrett's name. Meanwhile, Becca — who has supported the Black Lives Matter movement and protests on social media — wrote on her Instagram Story that there are "many conversations being had between friends, family members, Garrett and podcast crew alike" about the ongoing situation and Garrett's post. "Just because I'm silent on my IG right now doesn't mean I'm silent in my life."

More like this
'Bling Empire: New York' Star Nam Laks Is The “Blair Waldorf Of Thailand”
By Alyssa Lapid
We Finally Have Some Answers To How Heather Gay Got A Black Eye On 'RHOSLC'
By Samantha Rollins
Hannah Ann Got Engaged 3 Years After 'The Bachelor' & The Proposal Was Dreamy
By Grace Wehniainen
Blake Abbie Was In A 'Boys Over Flowers' Reboot Before 'Bling Empire: New York'
By Alyssa Lapid
Get Even More From Bustle — Sign Up For The Newsletter
From hair trends to relationship advice, our daily newsletter has everything you need to sound like a person who’s on TikTok, even if you aren’t.