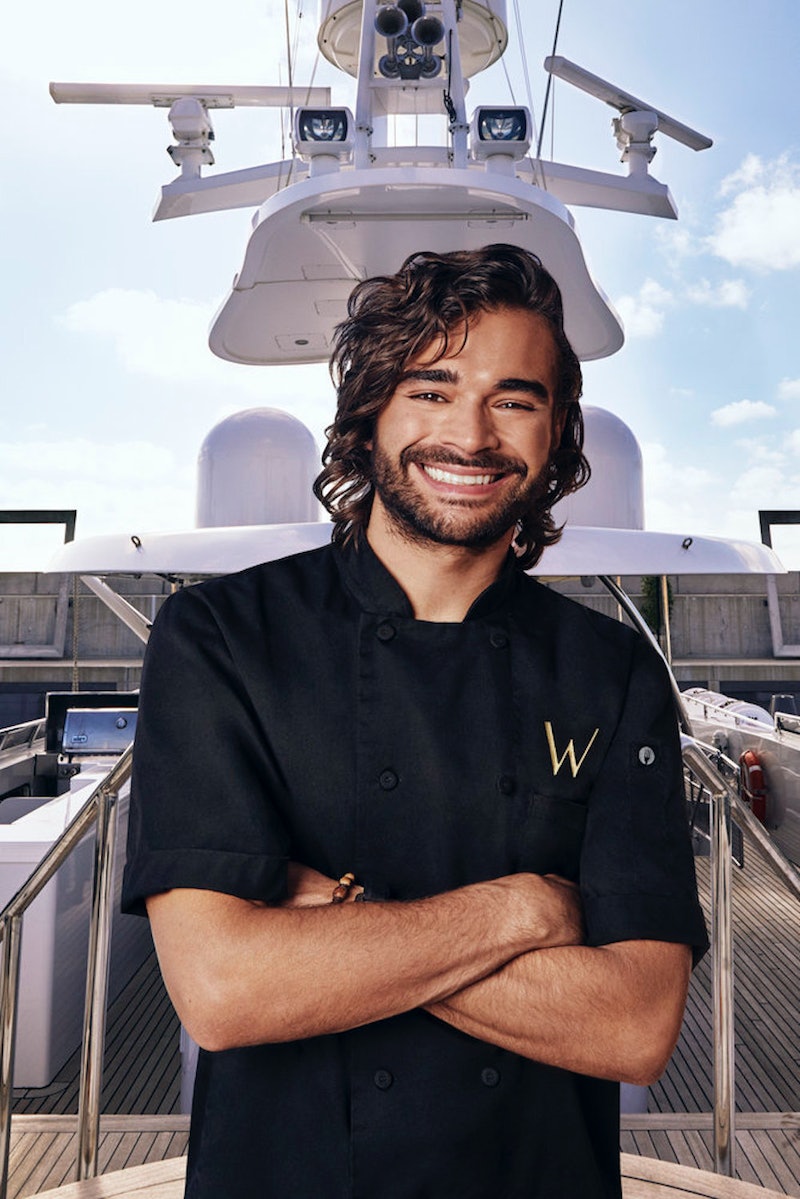 Time to hit the high seas: Bravo's Below Deck: Mediterranean is back with new cast mates and a new location — Mallorca, Spain — for Season 5. Spicing up the yacht's kitchen is Below Deck: Mediterranean's Hindrigo "Kiko" Lorran, a new Brazilian chef who loves cooking and being on the open ocean. Though Hindrigo seems like a calm, experienced chef, it sounds like the rich and finicky customers are going to test his otherwise zen attitude. Here's everything to know about Hindrigo going into this season.

Hindrigo is a world-traveling chef

According to his Bravo bio, Hindrigo was born in Brazil and is fluent in Portuguese, Spanish, and English. He thrives on variety and spontaneity, making him well-suited for the unpredictability of yachtie life.

He has an international palate

Hindrigo describes himself as a “rustic chef" who has spent 10 years traveling and cooking across the globe, from Barcelona to Cape Town to the Amazon River. As a result, he specializes in international cuisine, and is particularly skilled with ocean-based dishes like sushi and ceviche.

Hindrigo's Instagram details a lot of his cooking adventures, as well as his skateboarding and surfing snapshots. He's clearly an avid surfer, and he travels to places like Bali to catch some waves. (Unsurprisingly, his Instagram bio is "eat/surf/repeat.") He also goes on epic camping trips and deep dives into the ocean.

He wrote a cookbook

In 2016, Hindrigo combined his two loves and published The Surfer's Cookbook. According to the book's website, Hindrigo learned to cook from his mom when he was 8 years old, and he's been working on his passion ever since. The book contains recipes like steak tartare and Greek yogurt desserts.

Hindrigo appears to be in a long term relationship with his significant other, Nicole. As of Apr. 8 he was cheerfully posting about spending time in Hawaii with her, and she describes Hindrigo on her own Instagram as her "partner in crime." They seem to have been together for a while, and were spotted surfing together on Hindrigo's own Instagram in 2017.

There might be some problems brewing in the kitchen

Hindrigo seems pretty good-natured, but it looks like he's going to run into some issues as the newest chef. In Bravo's "first look" video, a customer is seen complaining that he was served raw chicken. Later, it shows a customer asking for a six-course meal for 12 people, to which Hindrigo laughs, responding with, "I'm f*cked!"

We'll have to wait and see if Hindrigo can weather all the storms coming his way. Tune into the new season of Below Deck: Mediterranean on Bravo on Monday, June 1 at 9 p.m.

More like this
Everything To Know About 'The Real Housewives Ultimate Girls Trip' Season 4
By Jake Viswanath
Susie Wrote About Choosing "Sun Not Shade" After Clayton & Rachel's 'Bachelor' TikTok
By Grace Wehniainen
Erika Jayne's Estranged Husband Tom Girardi Has Been Indicted On Fraud Charges
By Jake Viswanath
'RHOSLC’s Heather & Whitney Are Still On A “Friendship Break” After Season 3 Reunion
By Jake Viswanath
Get Even More From Bustle — Sign Up For The Newsletter
From hair trends to relationship advice, our daily newsletter has everything you need to sound like a person who’s on TikTok, even if you aren’t.