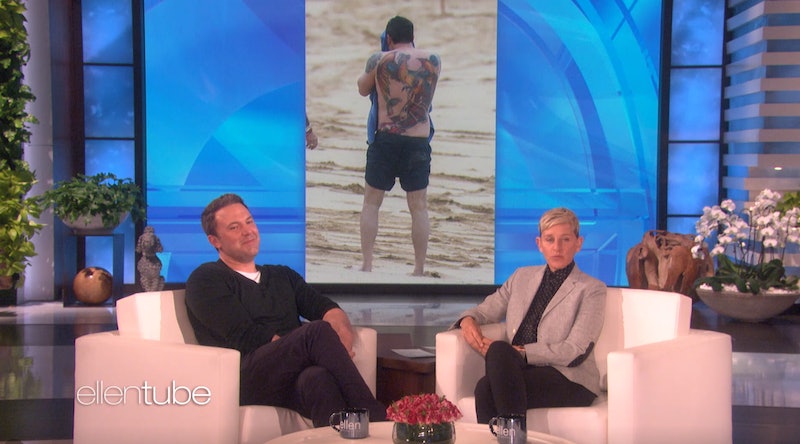 So, remember back in 2015, when a certain star was snapped on the beach with a wildly colorful, vastly-spanning, bird-like tattoo on his back? Very hard to miss. At the time, the star claimed it was fake. As it turns out, though, Ben Affleck's giant phoenix tattoo is very, very real — and no, he doesn't regret it, the 46-year-old admitted during a recent interview on The Ellen DeGeneres Show, as reported by People.

Affleck appeared on Ellen to promote his new Netflix film, Triple Frontier, which also stars Charlie Hunnam, Oscar Isaac, and Garrett Hedlund. The movie revolves around five former special forces operatives who, after retiring and attempting to re-adjust to their lives as civilians, "reunite to steal a drug lord's fortune, unleashing a chain of unintended consequences," according to Netflix.

The first photo of Affleck's back tattoo was snapped while he was filming another movie, Fly By Night, in December 2015. A few months later, Extra's Mario Lopez asked the star about the ink, to which he replied that it was "fake for a movie." In March 2018, however, a shirtless Affleck got snapped, yet again, while swimming with his Triple Frontier costars during filming in Hawaii. And guess what? Yep, his giant phoenix tattoo was totally still there.

After Affleck gave DeGeneres a the crowd a brief synopsis of his new film's plot, the host then addressed the elephant — er, the phoenix — in the room. "Y'all went swimming together and there was a photo of your back tattoo that got a lot of attention," she said. "It did," Affleck grimaced. "Not so much positive."

They then splashed the aforementioned beach photo across a large screen, and DeGeneres replied, "I think people ... it's a ... it's a commitment," she stuttered. "It's, um, what is ... It's like," she continued, at which point Affleck jumped in and said, "It's a phoenix." The host nodded and added, "Rising from your ass."

It kind of seemed like Affleck was a tad embarrassed about the whole thing, but he was definitely a good sport about it. "We didn't plan that bit," he responded, after laughing at DeGeneres' word play on the mythological image of a phoenix rising from the ashes.

"Yes, it's a phoenix, rising from my ass," Affleck continued, "and I was about to say it represents something really important to me, but you know what, maybe we'll just skip that," he said, face noticeably flushed.

"No, it's meaningful to me. I like it," the actor went on. "It's something that I kind of kept private. It wasn’t like I was doing photoshoots or whatever, we were two hours north of the city on an island in Hawaii and we didn’t know the paparazzi were there," he admitted. "So they got a picture of my tattoo. And sentiment ran … you know, against."

Indeed. When Affleck's ex-wife, Jennifer Garner, was asked about the ink during an interview with Vanity Fair in 2016, her response was, "You know what we would say in my hometown about that? 'Bless his heart.' A phoenix rising from the ashes. Am I the ashes in this scenario? I take umbrage," she added. "I refuse to be the ashes."

Another one of Affleck's exes, Jennifer Lopez, was also asked about his tat that same year on Watch What Happens Live With Andy Cohen (as per People). "It’s awful! What are you doing?" she told the host during the "Plead the Fifth" segment.

Still, though, Affleck was seemingly able to shake off the negative responses. "I love my tattoo," he told DeGeneres. "I'm very happy with it. Luckily, I'm the one who has it." Hey, you know what? Good for him. His body, his choice. Rise on, Ben Affleck. Rise on.