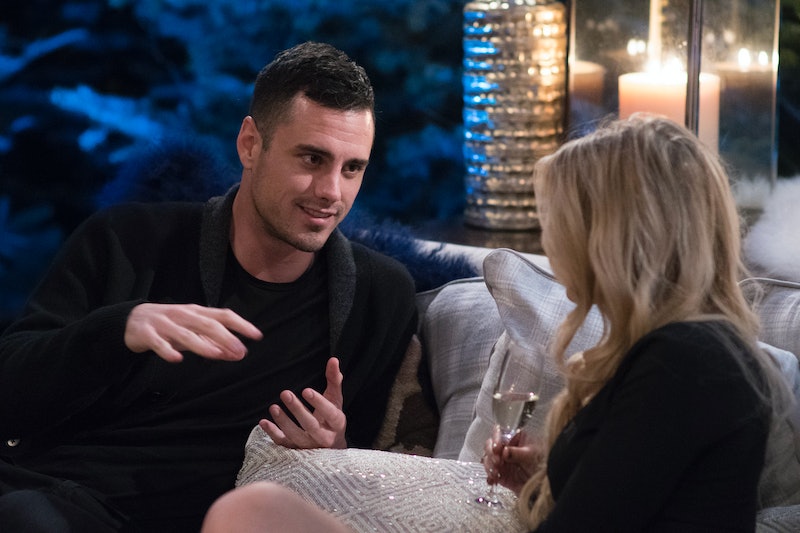 There are plenty of Bachelor viewers (and potential contestants) hoping for Ben Higgins to try out round two as the show's lead. But at this moment, that doesn't seem likely to happen. That's because Ben Higgins revealed that he's dating again during the Jan. 14 episode of The Ben & Ashley I Almost Famous podcast.

During an interview with current Bachelor lead Colton Underwood, Ben flipped the script. Instead of solely focusing on Colton's love life, he made a revelation about his own. He confessed, "I was just telling someone the other day, I started dating again. This is big news, right? I am dating." Yes, it is some major news for Bachelor Nation.

Then, Colton wondered, "Are you on an app?" After saying, "No," Ben admitted that this wasn't just a general statement about being open to a relationship. In fact, he actually has a strong interest in someone specifically. He explained, "I'm actually dating one person that we will talk about in a couple weeks on the podcast."

Later in the episode, Ben revealed that Shawn Booth will be on next week's episode. So, hopefully Ben's deep-dive into his own love life will go down the following week. Waiting beyond that would just be way too long for fans. Maybe they should release two podcast episodes next week? Just a suggestion.

Even though Ben didn't find long-lasting love during his time on reality TV, his experiences have changed his approach to dating for the better. The Season 20 Bachelor lead explained,

"Here's thing, we were talking about the other night how The Bachelor is a really great thing. It forces you to have conversations and right now the girl that I'm talking to is long-distance."

So how does he know her? This just prompts so many questions, but unfortunately, he's not revealing too much right now.

He continued, "And so we FaceTime a lot and it feels very similar because we don't get time together. It is very intentional. It is very focused. If we're gonna spend any time with each other, it's going to be in conversation." And that "focused dating" is exactly what the cast members go through on The Bachelor.

Ben didn't share any super specific information, like how far away is considered "long-distance"? What's her name? However, he actually did reveal something very sweet about his current love interest: "She's like the best, purest person I know, so a lot of those conversations are about our lives."

The Bachelor fandom has been rooting for him to find love for quite some time now. Ben made his first franchise appearance during Kaitlyn Bristowe's season of The Bachelorette back in 2015. He finished in third place, giving him the perfect segue to star as the lead in his own Bachelor season.

On The Bachelor, Ben got engaged to Lauren Bushnell during the finale, which aired in March 2016. In May 2017, Ben and Lauren announced their breakup. In 2018, he made his franchise comeback on The Bachelor: Winter Games. As great as it was to see him back on TV, Ben left on a somber note, crying to host Chris Harrison about how he wasn't ready to date.

Bachelor viewers have witnessed a lot of major moments throughout the years and they just cannot help rooting for him to find love. Sure, Ben didn't use the "love" word or even the word "girlfriend," but it's just nice to know that he's back in the dating game, whether there are roses or not. Then again, he can still give a woman roses even if he isn't on a reality TV show.