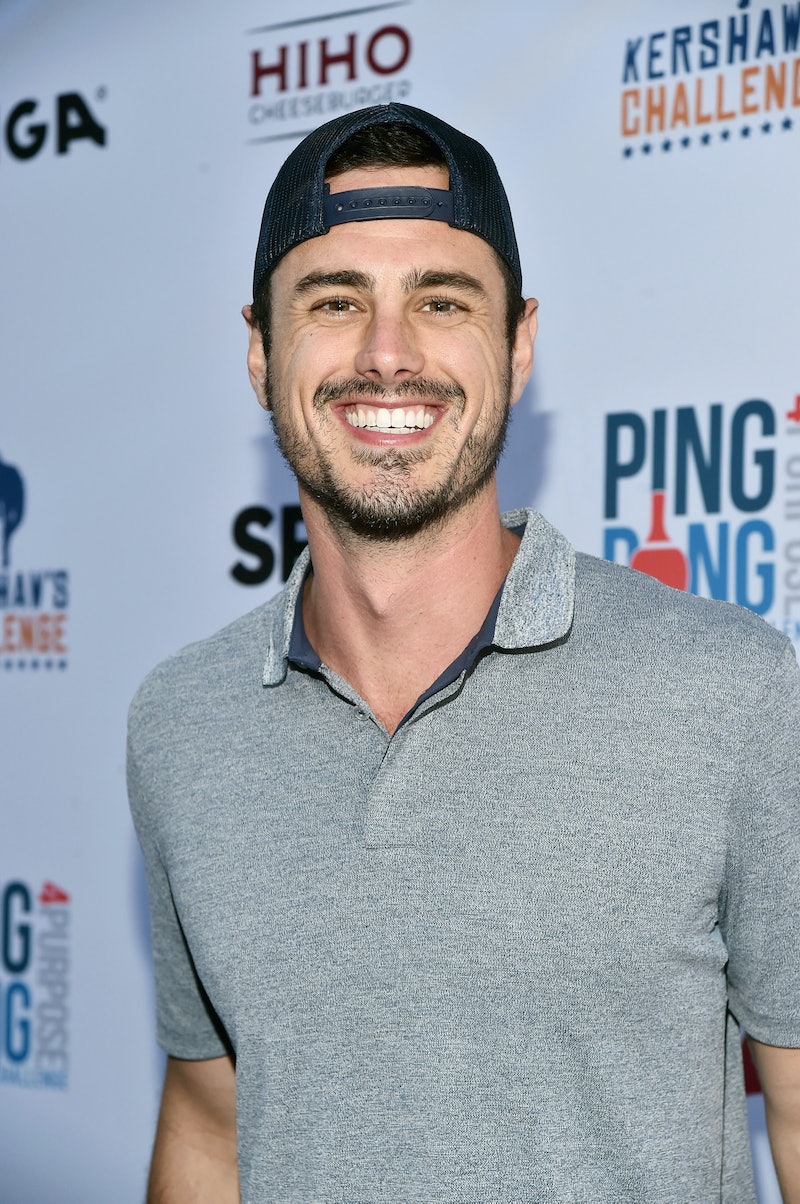 He kept it a secret for awhile, but the secret is out: Ben Higgins has a new girlfriend. Earlier this month, the former Bachelor revealed that he is dating Jessica Clarke — his first serious relationship since ending his engagement to his final rose winner, Lauren Bushnell — and now, he's filling fans in on what's been happening in his personal life all this time. In a new preview from his Almost Famous podcast from Us Weekly, Ben and Jessica opened up about their relationship and what it's been like to make the distance between them work, and although it sounds like it's been a challenge, it also sounds like they're both very happy together.

On the podcast, Ben admitted that the first time he saw Jessica, he kissed her — or in his words, "laid it" — and fortunately, that kind of approach was something that Jessica was definitely into.

"Yeah, I mean I thought it was romantic,” Jessica said, according to the site. “Mostly because when I saw you I was like, ‘OK, do I make a joke or should I just say hi?’ And then you just kissed me, so I didn’t have to do either of them.”

Sounds like that totally took the pressure off the situation, which is not a bad thing at all.

The one downside to their relationship so far seems to be the fact that Ben lives in Colorado and Jessica lives in Nashville, so they've had to learn how to juggle a long distance relationship, even though things between them are still relatively new. But they've also learned a few tricks to make things easier in that department, like visiting each other as often as they can. Jessica said:

"After two weeks is when it really gets hard. And whenever we went a month, we had seen each other three weeks in a row that time, right? And then we went a month without seeing each other, so that was like the worst. So we can’t have that happen again.”

Another trick they've learned to use is FaceTime. According to Ben, FaceTime is key for them — and it's something they learned after picking the brains of another long distance couple that they know. He said:

"Honestly FaceTime is really great. Jessica has a really good friend whose husband is in the military and he gets deployed for months at a time. We met with them for dinner one night and were kind of asking them how they do it because he’s gone and sometimes they can’t talk for weeks on end. What we found out is FaceTime is the saver, like, it’s such a benefit now in relationships.”

Even though it can't be easy to live so far apart from the person you care about, it sounds like Ben and Jessica are making it work. Now that they've gone public on Instagram and Ben's podcast, maybe they'll share even more about their relationship soon? Bachelor fans can only hope.