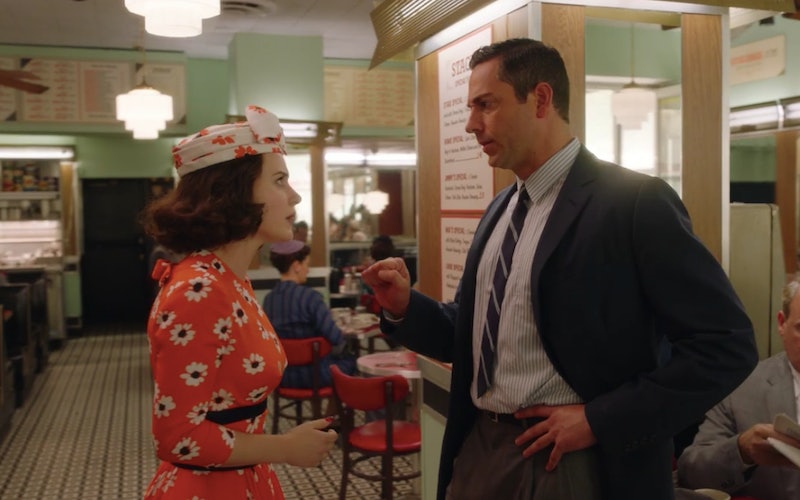 Spoilers ahead for The Marvelous Mrs. Maisel Season 3. The Marvelous Mrs. Maisel Season 3 is full of hilarious dialogue, colorful backdrops, and Midge's growing success as a comic, but until the final episode, it still feels like it's missing something — a proper breakup between Midge and Benjamin, Zachary Levi's character who proposed to her at the end of Season 2. Midge cut things off with him abruptly after getting the offer to tour with Shy Baldwin, and when the show returns, it doesn't do much to explain what happened between them or how Benjamin responded...until a few visits from Midge's mother Rose finally drive him to confront his ex-fiancée.

Rose first finds Benjamin at the hospital because she feels bad for setting him and Midge up, and wants to apologize for how things ended. Benjamin is surprisingly gracious: he says that while Midge was "the right kind of weird" for him, he just wasn't a fit for her, and Rose has nothing to be sorry about. However, when Rose then returns to try and set him up with another woman, Benjamin — thinking Midge has sent her in an attempt to clear her conscience — becomes livid. He marches down to Stage Deli, where Midge is celebrating her success on tour, and interrupts her to finally hash out the end of their relationship, explaining how he really felt receiving a "Dear John letter, un-proofed" instead of a phone call to end their engagement. He refrained from saying anything before because he didn't want her to feel guilty, but now he's not holding back.

"I figured if that's the way you wanted it, I wasn't gonna beg you for an explanation — an explanation I was absolutely entitled to, by the way," he says, getting increasingly angry as he recalls Rose trying to set him up. "You feel guilty, so you decided to get me settled so you don't have to feel bad anymore. Well, f*ck that. You don't get a say in what happens to me. You feel like a louse, too bad. Live with it."

Midge explains that she ended things because she didn't think he could handle her constantly talking about him and her life in her act, and because they would have been separated a lot while she was on tour. But as Benjamin points out, she never asked how he felt about it. In actuality, he would've tried to make it work if she'd given him the chance.

This is just one in a series of moments this season that have forced Midge to confront the fact that the world doesn't revolve around her. She may be used to being the center of attention, but she's slowly beginning to realize that doesn't mean she always comes first. Yes, it's ultimately up to her to decide if having a career in comedy means it's better for her to be single, but Benjamin at least deserved to be part of that conversation. At least he finally got the closure he was owed.

More like this
Airris From 'MAFS' Says He Doesn’t Regret Going To Decision Day With Jasmine
By Brad Witter
Shaq Might've Spoiled His Relationship Status With Kirsten After 'MAFS'
By Brad Witter
All The Clues Clint & Gina Aren’t Still Together After 'MAFS' Season 16
By Brad Witter
Mack & Domynique Reportedly Had An "Epic" Breakup On 'Married At First Sight'
By Brad Witter
Get Even More From Bustle — Sign Up For The Newsletter
From hair trends to relationship advice, our daily newsletter has everything you need to sound like a person who’s on TikTok, even if you aren’t.