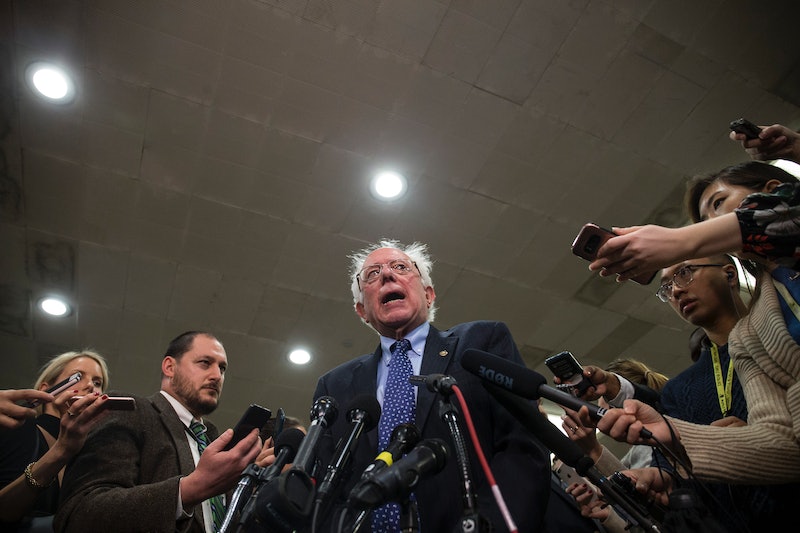 As of Tuesday morning, Vermont Sen. Bernie Sanders' 2020 announcement confirms he will be running for president once more in the upcoming election. This will mark Sanders' second presidential run after he first ran for office in 2016, campaigning on a platform of democratic socialism that has since inspired and fueled the political runs of politicians like Alexandria Ocasio-Cortez. Now, he's vying for the POTUS role again — and the field of competition is packed.

"I am asking you to join me today as part of an unprecedented and historic grassroots campaign that will begin with at least a million people from across the country," Sanders said in an email to supporters following his announcement on Vermont Public Radio, according to CNN.

According to The Guardian, Sanders has said on more than one occasion that he would only run for president if he believed he was the best candidate to beat President Donald Trump. Jane Sanders, his wife, said to the publication in December that the threat of global warming, as well as Trump's impact on democratic institutions over the last few years, would impact the Vermont senator's decision to run or not.

“He has no burning desire to be president," she said. "He has a burning desire to have his country be better for people of all backgrounds. So he has to determine if he is the best person to defeat Donald Trump."

It looks like Bernie has decided he's the man for the job. But in order to make it through the Democratic primary, Sanders will have to compete with fellow Democratic Sens. Elizabeth Warren (Massachusetts), Kirsten Gillibrand (New York), Amy Klobuchar (Minnesota), Kamala Harris (California), and Cory Booker (New Jersey). Outside of the Senate, multiple others have also thrown their hats in the ring for the Democratic primary, including former Secretary of Housing and Urban Development Julian Castro and Rep. Tulsi Gabbard (Hawaii).

A video posted to Sanders Twitter page Tuesday morning focused on the fact that his progressive values have been consistent over the years, and have helped drive the Democratic Party further to the left. From a higher minimum wage, to fighting climate change, to free college, his 2020 campaign will feature many of the same pillars as his 2016 campaign.

"Real change never takes place from the top on down, but always from the bottom on up," Sanders says in the video. It ends with him saying, "If we are prepared to stand together, there is no end to what the great people of our nation can accomplish."

With such a crowded field, the 2020 Democratic primary is sure to be a long one. The Democratic National Committee (DNC) announced in December that there will be a dozen Democratic debates — six in 2019, and six in 2020.