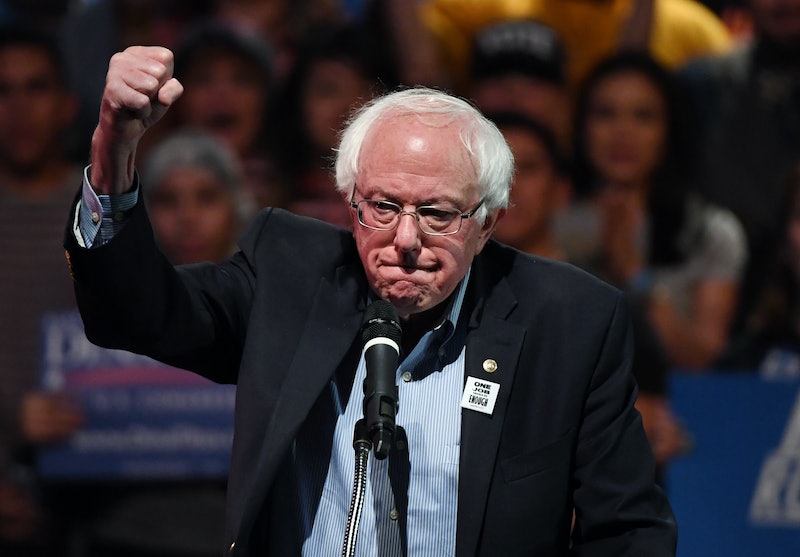 A statement from his campaign confirmed that Sen. Bernie Sanders cut his head on a shower door on Friday, requiring a brief visit to a walk-in clinic and seven stitches. A spokeswoman for the Vermont senator's presidential campaign said that he was given a "clean bill of health" and will proceed with all of his scheduled events for the day, Politico reports.

"The senator has proceeded with all of his scheduled events — joining a group of approximately 20 local clergy for breakfast this morning — and looks forward to joining a roundtable with South Carolinians this afternoon to discuss how we can provide high quality affordable health care for all," Sanders spokeswoman Arianna Jones tells Politico.

Hours after the accident, Sanders did indeed show up to a town hall on health care in South Carolina with a bandage on his head. It's amidst his first visit to the Palmetto State, an early primary state in which he struggled to gain traction during the 2016 election, since announcing his candidacy for the 2020 Democratic nomination.

Jones said that the shower door was made of glass, and that Sanders hit his head on the edge of it, but didn't reveal any information about the senator's accident other than that.

However, polling suggests that Sanders has improved his standing among black voters immensely since the 2016 election, with a Morning Consult poll showing only former Vice President Joe Biden having higher support among black Democratic primary voters. Reports suggest that Sanders is increasing his outreach to black South Carolinians in the year leading up to the state's 2020 Democratic primary.

On Friday, shortly after injuring himself on the shower door, Sanders participated held a roundtable discussion at the International Longshoreman's Association in Charleston, the Charleston City Paper reports. According to the Post and Courier, around 45 people showed up to the event, and Sanders spent most of the time listening to the seven panelists talk about their views on health care.

“The idea of Medicare-for-all, comprehensive care covering all health care needs, a few years ago was seen to be a radical idea,” Sanders said at the event, according to the Post and Courier. “Turns out now, in poll after poll, the majority of American people support it. So we are making some progress.”

A January poll by the Kaiser Family Foundation found that 56 percent of Americans support single-payer health care, also known as Medicare-for-all, a policy Sanders has championed for decades but which only recently gained mainstream traction.

Sanders is set to hit Nevada, another important early primary state, after wrapping up in South Carolina, the Post and Courier reports.