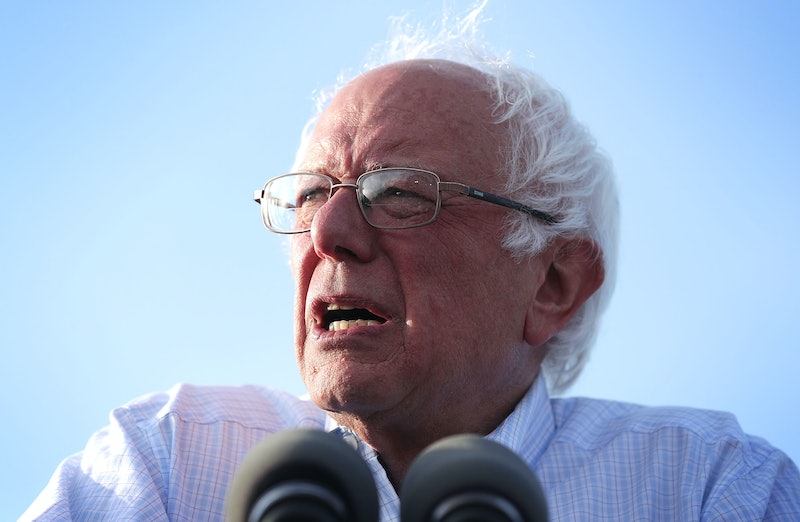 Sen. Bernie Sanders has never been what one would call a fan of Donald Trump. In fact, it's fair to say the Vermont senator has been one of Trump's more outspoken critics. Recently, however, some have questioned if Sanders — who has called Trump "delusional" and "a pathological liar" on more than one occasion — has gone too far in his rebukes now that Trump is president. But Sanders has said there's a good reason for the language he uses to describe the president.

"We are in a pivotal moment in American history," Sanders tweeted Sunday. "We have a president who is delusional. He is a pathological liar."

It was hardly the first time Sanders had used the word "delusional" to describe Trump. He used the term Nov. 29 while discussing Trump's claim he had won the popular when you "deduct the millions of people who voted illegally" in an interview with Conan O'Brien. He'd also used the term Jan. 26 while speaking in West Virginia about how out of touch he felt Trump was with the needs of working class Americans. And he used both terms Sunday while discussing Trump's latest policy moves in an appearance on NBC's Meet the Press.

But while some have questioned the severity of Sanders' choice of words, the senator recently defended his use of the terms "delusional" and "pathological liar" in an interview on CNN's OutFront, saying he's simply calling it as he sees it.

"I never have just attacked people because their views are different than mine," Sanders told OutFront's Erin Burnett when asked whether he thought it was "disrespectful of the Office of the President" to question Trump's mental health by using words like "delusional" to describe him. "I use the term 'delusional' with regard to Trump when he said there were 3 to 5 million 'illegals' who voted in the last election. ... That is delusional. Nobody in the world believes that is the case. There is zero evidence to back it up. But he makes that statement. So I think the word 'delusional' is correct."

Sanders' defense of labeling Trump "delusional" appears to boil down to adductive reasoning, or the idea that you can identify something or someone by observing their habitual characteristics. In essence, if it looks like a duck and it quacks like a duck, it's probably a duck.

Sanders went on to say he was completely aware of the severity and seriousness of his language, but felt they were the proper response to Trump's actions.

"I have used the word 'pathological liar' to describe Donald Trump," Sanders said. "Those are very harsh terms. I don't feel good about it. I disagreed with George Bush all the time – never called him a pathological liar, because he was not. Just a conservative president. But this guy lies all of the time."