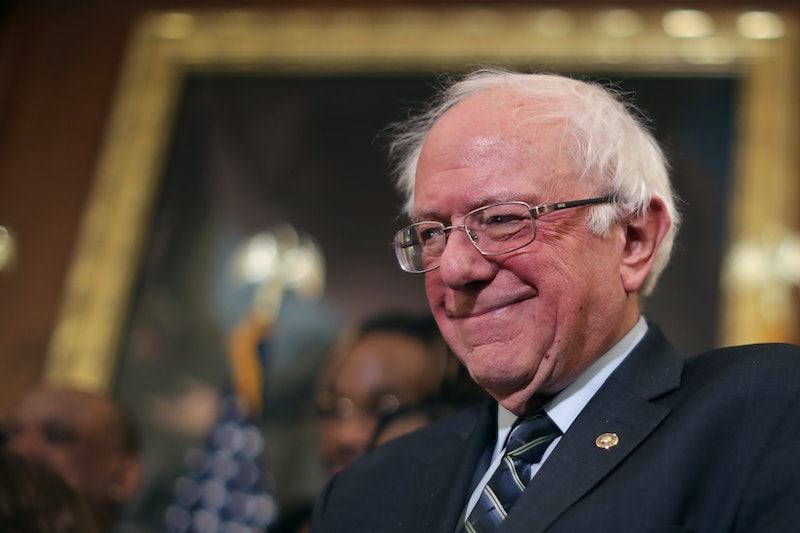 On Monday evening, a familiar 2020 contender held a town hall on CNN, during which audience members asked him about his stance on a variety of issues. When asked how he would potentially engage with the president onstage in presidential debates, Bernie Sanders joked that a 2020 debate with Trump would require a lie detector. The crowd seemed to love Sanders' response and immediately erupted in applause.

Senator Sanders' town hall took place in Washington, D.C and was moderated by CNN's Wolf Blitzer. At the event, Sanders faced a host of questions that provided insight into what he might be like as a 2020 presidential candidate. Indeed, CNN reported that, when asked about how he would debate Trump, Sanders replied, "Well, we'll bring a lie detector along. And every time he lies, it goes beep. That would be the first thing."

The senator from Vermont also didn't hold back when speaking further about Trump versus other conservative politicians. As Sanders said via CNN:

I don't mean to be overly facetious [in joking about the lie detector]. I have conservative friends. We all do. And they're honest people. They believe what they believe, I believe what I believe. That's called democracy and that's a good thing. But I believe the fraud that Trump is, the pathological liar that he is, has to be exposed.

At another point during the event, Newsweek reported that Sanders said that he particularly wants to reach out to Trump supporters as a 2020 candidate in hopes of convincing them that Trump doesn't have their best interests in mind. As the senator described via Newsweek:

We are going to talk to those people, and we are going to expose Trump for the liar and fraud that he is ... Trump told working people that he was gonna be on their side. He is not on their side and his record proves that quite clearly ... I think by the end of this campaign, I suspect that a number of people who voted for Donald Trump will understand that he is not their friend.

Sanders announced his 2020 candidacy on Feb. 19. At the time, the Burlington Free Press reported that Sanders said in an email that he's running for president because he wants to bring unified leadership to the United States. Moreover, the senator also echoed similar sentiments about Trump in this announcement. The outlet reported that Sanders said that Trump is "the most dangerous president in modern American history." The paper also noted that the senator referred to Trump as a "pathological liar, a fraud, a racist, a sexist, a xenophobe and someone who is undermining American democracy as he leads us in an authoritarian direction."

Sanders' candidacy announcement as well as his town hall remarks have made it pretty clear that he isn't going to shy away from criticizing Trump during the 2020 presidential campaign. As campaign season gets underway, it will certainly be interesting to see how other candidates' approaches to Trump compare to Sanders' — and whether they offer the same criticisms of Trump.