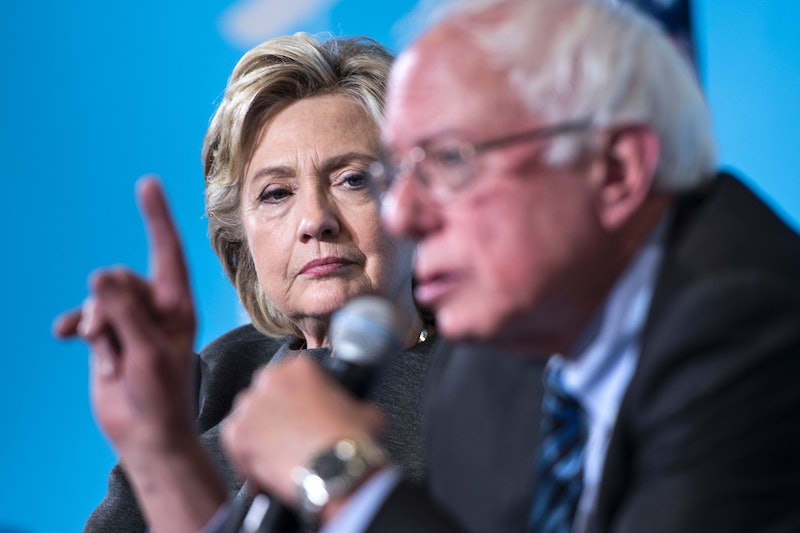 Who's really to blame for Hillary Clinton's defeat in the 2016 presidential election? That's the question Clinton has attempted to answer in her new book, What Happened. In her book, Clinton accuses her Democratic primary rival Sen. Bernie Sanders of not only doing "lasting damage" to her campaign in the primary, but also of paving the way for the "Crooked Hillary" narrative that then-candidate Donald Trump leveraged as an attack point. But Sanders is pushing back against Clinton's criticism, arguing he did all he could to help his former rival after he lost the primary.

In an interview on NBC's Meet the Press on Sunday, Sanders rejected Clinton's claim that he contributed to her 2016 election loss. "I worked as hard as I could to see that Hillary Clinton would be elected president," Sanders said. "People say, 'Well, not everybody who voted for Bernie ended up voting for Hillary.' No kidding. That's what happens in politics," the senator said.

Sanders referenced a YouGov Survey known as the 2008 Cooperative Campaign Analysis Project as evidence voters don't always automatically feel drawn to support the candidate that wins the primary for the political party their preferred candidate ascribes to. The YouGov survey had found 24 percent of people who'd reported voting for Clinton in the 2008 primary ultimately opted to vote for then-Republican nominee John McCain rather than Barack Obama in the general election that followed.

In What Happened, Clinton reportedly didn't hold back in her criticism of Sanders. She claimed he had dubious reasons for running in the 2016 presidential election and no loyalty to the Democratic party. "He didn't get into the race to make sure a Democrat won the White House, he got in to disrupt the Democratic Party," Clinton wrote in her book. "He certainly shared my horror at the thought of Donald Trump becoming President, and I appreciated that he campaigned for me in the general election. But he isn't a Democrat — that's not a smear, that's what he says."

And in a recent interview with CNN's Anderson Cooper, Clinton continued her criticism of the Vermont senator, accusing Sanders of committing a grave "political sin" in the weeks that followed his primary defeat. "The political sin he committed was the failure to move quickly to unify the party and his supporters," she told Cooper. "It was clear I was going to be the nominee, like, in March or April. It was beyond any doubt in June."

Clinton cited her immediate support of Barack Obama after he bested her in the primary in 2008 and claimed she "didn't get that same respect and reciprocity from Sanders or his supporters." She claimed he "could be helpful, if he so chose."

But while Clinton remains focused on uncovering "what happened" to cause her loss to Trump, Sanders questioned why there was still so much talk about the 2016 presidential election. On NBC's Meet the Press he called such actions unproductive and urged the Democratic Party to instead look inward in order to make some fundamental changes. "The current model of the Democratic Party is obviously not working," he said.