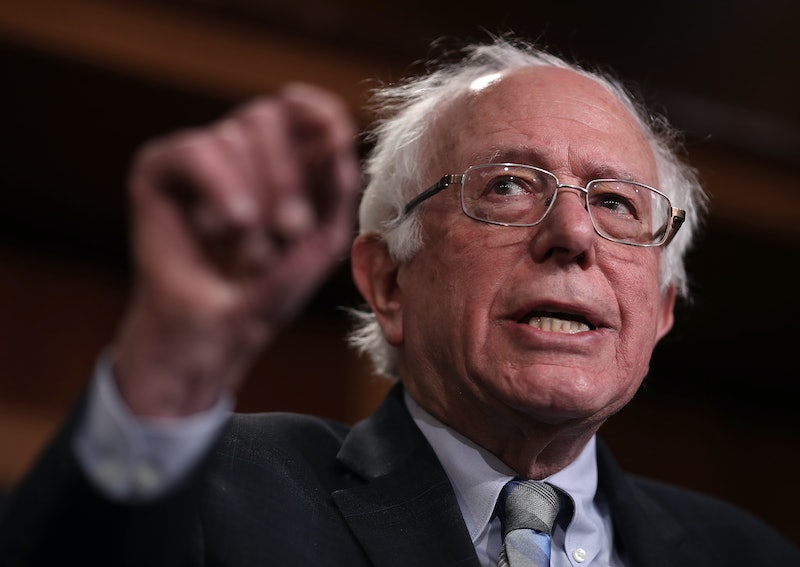 On Tuesday night, Vermont's senator delivered a response to President Donald Trump's State of the Union address — something that, according to Vox, he has done every year since Trump assumed the presidency. He livestreamed the speech on YouTube and Facebook shortly after former Georgia gubernatorial candidate Stacey Abrams delivered the official Democratic rebuttal to Trump's SOTU. But before Bernie Sanders' State of the Union response even started, people had a lot of opinions about it.

Some social media users, as well as Sanders' Democratic critics, argued that the Vermont senator was trying to upstage a black woman by delivering a SOTU response. According to The Washington Post, Abrams made history by becoming the first black woman to deliver an official response to a SOTU address. Symone Sanders, who served as a press secretary for Bernie Sanders' 2016 presidential campaign, said on CNN that she would have advised the senator to avoid giving his own response and to instead uplift the voices of black women like Abrams.

However, Sanders' supporters defended him by arguing that he has always delivered his own SOTU response as an Independent, and that he was waiting until after Abrams' Democratic response so that he would not upstage her. Sanders also posted a tweet following Trump's speech, urging his followers to tune into Abrams' rebuttal. According to Vox, this conflict was partially sparked by a mistake in an article by The Hill, which initially reported that Sanders would speak at the same time as Abrams. The Hill eventually updated the article.

Despite the criticism that Sanders faced, he went ahead and delivered his response shortly after Abrams wrapped up her rebuttal. He started off by congratulating Abrams on her "very effective response," and said that she would have made "a wonderful governor of Georgia." Sanders then launched into a detailed criticism of Trump's SOTU address, in which he slammed the president for failing to discuss climate change, stricter gun control legislation, and the increase in the annual trade deficit. He also criticized Trump for claiming that the American economy "is booming."

"Yes, the economy is great — for the three wealthiest people in America," Sanders said. "It is absolutely not booming for the nearly 80 percent of American workers who live paycheck to paycheck, desperately hoping that their child doesn’t get sick, praying that their car doesn’t break down, or that they don’t lose their job."

Sanders went on to question why Trump chose to denigrate undocumented immigrants but did not even mention mass shootings carried out by white men. He criticized the president's proposed cuts to Medicaid, as well as his refusal to embrace universal health care. He slammed Trump for shutting down the government and causing "an enormous amount of pain and uncertainty," and argued that not all people in the United States are "truly free":

Sanders concluded his speech by calling on Americans to fight for social, racial, economic, and environmental justice, in order to "create the kind of America that we know we can become." If Sanders does in fact decide to run for president in 2020, he will be joining a crowded field of Democrats and progressives seeking to take Trump's place.