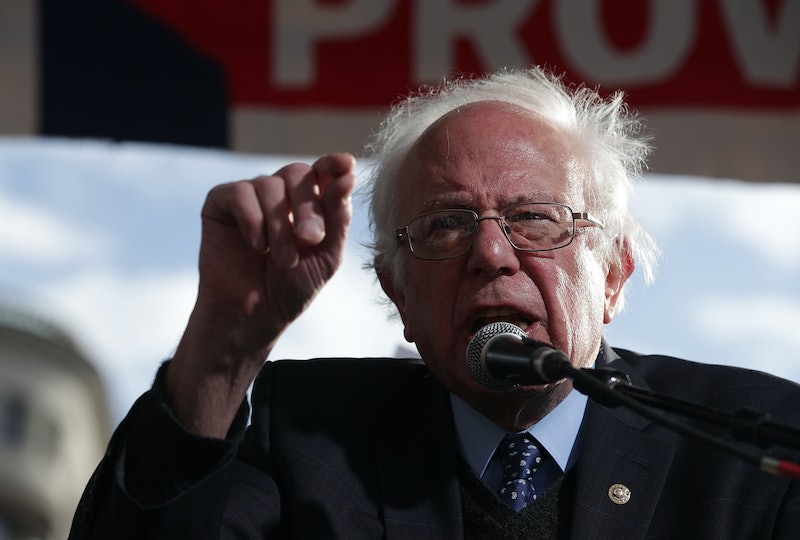 If you're looking for a progressive elected official who clearly has no fear of calling for more funding for America's social programs, look no further than Vermont senator and 2016 Democratic presidential candidate Bernie Sanders. With the unveiling of a blunt and powerful proposal this week, Sanders showed that no amount of Trump drama will distract him from his goals. In a bill he presented alongside Oregon representative Peter DeFazio, Sanders is proposing a Social Security expansion for millennials, taking the debate on protecting America's biggest social safety net program out of the strict realm of senior citizens and the middle-aged.

The way the bill operates, in simple terms, is by lifting an income cap that currently prevents the country's well-off citizens from having to pay higher taxes into the program. As it stands now, a worker must only pay into Social Security, via payroll taxes, on the first $127,200 worth of income they earn. In other words, if you earn less than that threshold, your full income is subject to Social Security taxation. If you make more than that threshold, however ― which would mean you're pretty successful, raking in a six-figure annual income ― your taxes would only take the hit on that first $127,200. In other words, it's effectively a regressive tax.

The capped figure is tied to the wage index, meaning it's slowly risen over the course of the last several decades. Up until 1950, it stood at just $3,000. It crossed into the six-figure range for the first time in 2008.

The reason this is hugely relevant to millennials is that Sanders' bill would extend the solvency of the Social Security program well beyond the timeframe that's commonly discussed in the halls of power. Typically, the go-to talking point on Social Security for the Republicans is that it'll have to change for future generations, obviously, with the specter of privatization always looming. But people currently over a certain age, who're already fast approaching retirement, should continue to have their benefits ensured.

It's an understandable political tact, considering that radically changing the system so close to someone's retirement would undeniably be pulling the rug out from under them, in a destabilizing and potentially vote-determining way. And, of course, seniors and the middle-aged are a much more reliable voting bloc than the young have historically been.

Compared to those sorts of promises, however, Sanders' bill is reaching for the stars. If it were passed and signed into law ― which looks virtually impossible given the current Republican domination of the legislature and the executive branch, sadly ― the Social Security Administration projects that the program's solvency would be extended out to 2078, ensuring benefits for today's millennials, too.

This is the kind of social welfare-oriented progressive idea that helped Sanders mount a ferocious challenge to former Democratic nominee Hillary Clinton last year, as well as one that prizes and considers the value of younger generations. And with the Democratic Party desperately seeking a new (or at the very least renewed) identity since Trump's upset victory, this is an example of a hallmark issue, benefiting everyday people, that could help turn the tide.

And whether or not it actually passes ― which again, is virtually impossible ― Sanders' pitch in the here and now should help set up the stakes for when the 2018 midterm elections roll around.