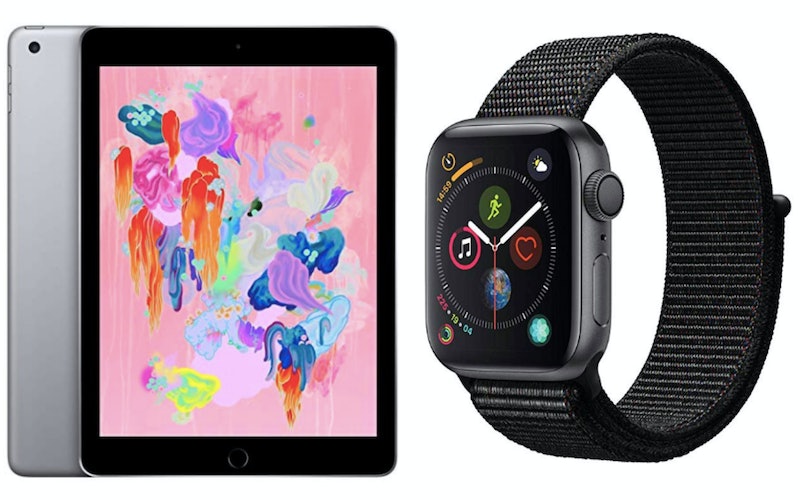 Chances are if you're a Prime member, you already have about 15 tabs of potential purchases open on your computer right now — the sheer amount of deals can be overwhelming. That said, if you're looking for the best Prime Day deals on Apple products, you should be able to narrow your admittedly humungous search window. And luckily, when it comes to deals, the Apple products available on Amazon are not missing out on the fun.

A primer on how Prime Day works, if you're not fully sure of the details: every year, Amazon has 48 hours worth of steep deals on products that run the gamut from technology to luggage, toys to makeup, storage to kitchen appliances. Basically, if you can dream it, there's an Amazon Prime Day deal for it. Luckily, there's an easy way to navigate the deals, both on Amazon's site and through Bustle's Prime Day page, which is rounding up the best deals in popular categories to help people grab them up before they sell out (and trust, a lot of these will sell out).

If you're looking specifically for Apple products, you're in luck — although the selection isn't large, the deals on the products are impressively steep. Here are the ones every Apple fan should know about.

Have you been considering purchasing an Apple Watch, or maybe upgrading your old one, but hesitated at the price? Prime Day may be the time to strike — the Apple Watch Series 3 is selling for $199, a full 36% off of the regular listed price. This model is swim proof and comes with an optical heart sensor, plus all of the other Apple Watch bells and whistles — the ability to receive and send messages and calls, instant access to your apps, fitness goal tracking, and so much more.

Fans of the Apple iPad, it may be time for an upgrade — the latest model is now available for 30% off. This one comes equipped with a whopping 128GB of space, up to 10 hours of battery life, and FaceTime capabilities with front and back cameras. Plus, it supports the new Apple Pencil, giving users the ability to draw and write text on the screen so seamlessly that it feels like writing on an actual notebook. For the ultimate multitasker, it also lets you run several apps at once, so you won't miss a beat.

The Apple Watch Series 4 is different from the Apple Watch Series 3 model in a few notably important ways — while it has many of the same features, it also boasts the largest display screen of any other model, comes with fall detection, and is outfitted with an even more sensitive optical heart sensor, with an electrical heart sensor (or ECG app) on the way later in 2019. 17% may not seem like as steep of a discount compared to the other two Apple products, but considering all of the extra abilities the Series 4 has, it may be worth leveling up.

Amazon Prime Day Deals also include a lot of Apple-supported products like chargers, cases, and stylus pens, if you're interested in checking out other accessories; in the meantime, you can keep up with the rest of the best deals the site has to offer on Bustle's Prime Day page. Happy shopping!

More like this
These Are The Fastest Electric Kettles You Can Buy
By Margeaux Baulch Klein
11 Super Bowl Instagram Captions To Use On Game Day — Even If You Don’t Like Sports
By Alexis Morillo
Flip Phones Are Gen Z's Favorite New Nightlife Accessory
By Maria Santa Poggi
How To Hide Cords Under A Desk
By Jenny White
Get Even More From Bustle — Sign Up For The Newsletter
From hair trends to relationship advice, our daily newsletter has everything you need to sound like a person who’s on TikTok, even if you aren’t.