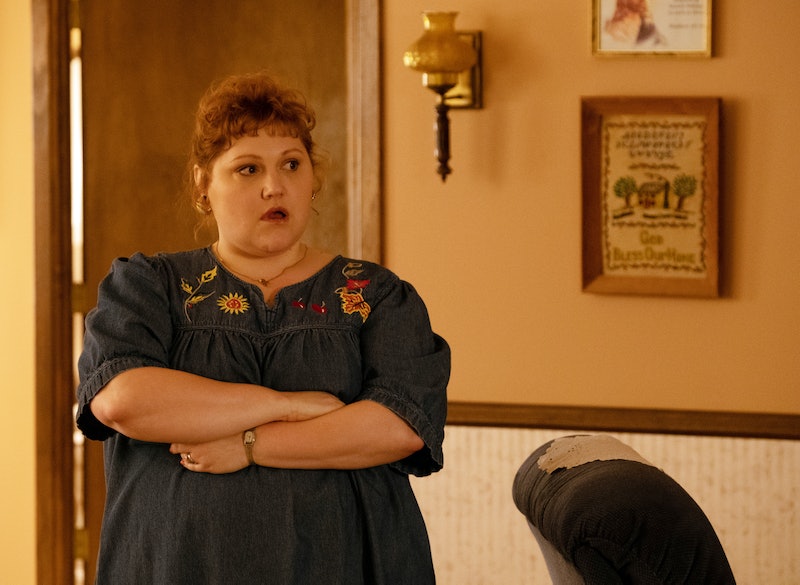 When audiences first meet Bets on On Becoming A God In Central Florida, she's introduced as Ernie's kind, supportive wife and one of Krystal Stubbs' only friends. While Bets doesn't speak up much in the show's early episodes, anyone who has listened to the band The Gossip in the past decade should know that Beth Ditto's On Becoming A God In Central Florida Character is likely hiding some righteous fury — not to mention a powerful singing voice.

On Becoming A God In Central Florida is Ditto's first major role since she started acting. Ditto has been the frontwoman for the indie-rock band The Gossip, wrote a memoir, started a solo music career of her own, and just recently began pursuing an acting. Her performance as Bets in On Becoming A God is only Ditto's third high-profile acting job, following a brief role in the film Nocturnal Animals as TV Voice #2 (that ended up getting cut from the final product) and later in her first true onscreen performance in Gus Van Sant's Don't Worry He Won't Get Far On Foot.

Ditto's role in Don't Worry shares a similarity with her On Becoming A God role in that they're both depictions of Southern woman by a Southern woman, with Ditto using her real Arkansas accent to bring life to her characters. Despite having a film with a major Hollywood director and a television series under her belt, Ditto doesn't express much confidence in her own acting. "I don’t think I can act," Ditto told The Guardian about her performance in Don't Worry as enthusiastic Alcoholics Anonymous member Reba. "I think I’m just really good at talking," she added.

After her role in Don't Worry, she told INTO that while she takes the craft of acting seriously, she believed that "something probably on this level will never happen again." — although that interview was published before she had taken on her role in On Becoming A God. While On Becoming A God may not be a Hollywood film with an acclaimed director and Hollywood talent such as Joaquin Phoenix and Jonah Hill, playing supporting cast on a Showtime drama starring Kirsten Dunst is proof that while Ditto hasn't been acting for long, she has already carved out a unique path for herself and is continuing to find opportunities on camera.

Bets may appear to be on the fringes of the manipulation and machinations that fuel On Becoming A God, but Ditto's real-life outspoken nature suggests that the show may be holding a few tricks up its sleeves. There's a chance that the character Bets will start to become more like Ditto herself over time, rebelling against the circumstances she's found herself in, or the show may utilize Ditto's famous singing voice for a musical sequence at some point in the series.

No matter what On Becoming A God has in store for Ditto, the singer seems to be making a smooth and successful transition from rock music to acting and will likely continue to find acting work beyond Don't Worry and On Becoming A God.

More like this
An Ultimate Guide To The Music Of 'Rap Sh!t'
By Brad Witter
The 'House Of The Dragon' Showrunners Revealed One Key Similarity With 'GoT'
By Grace Wehniainen and Kadin Burnett
Does The 'Echoes' Ending Mean There Will Be A Season 2?
By Kadin Burnett
Here’s How 'House Of The Dragon' Diverges From The Book’s Timeline
By Allyson Johnson
Get Even More From Bustle — Sign Up For The Newsletter