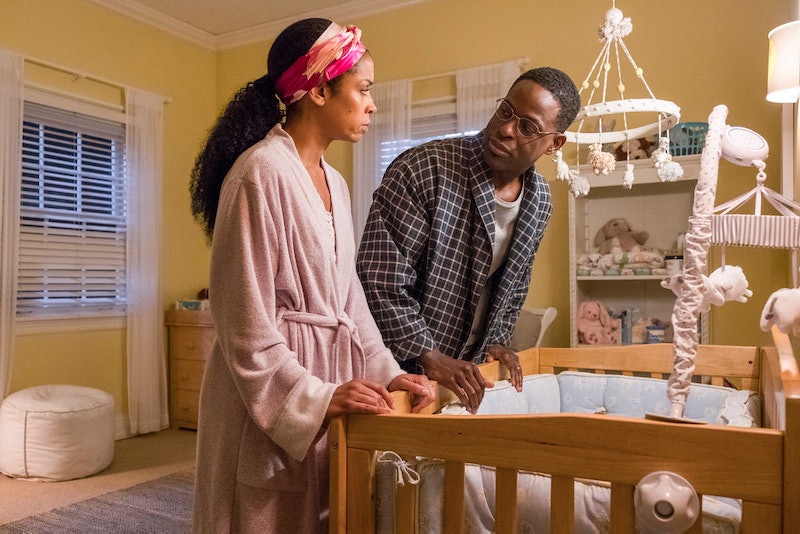 Randall and Beth Pearson have always been an imperfect couple, but one that seemed unbreakable. Lately, though, the tone of their relationship has shifted in a way that could spell disaster. Beth and Randall's fight on This Is Us' latest episode confirms that things under the surface aren't as idyllic as they might appear. And maybe, they never were.

This weeks takes viewers all the way back to Randall and Beth's first date, and in true Randall fashion, he does the absolute most. He's wearing a suit and tie when Beth's in a hoodie, he buys a trillion different bouquets of flowers before deciding which one is perfect, and he tells her the most intimate details of his life within the first ten minutes. Beth is understandably a little put off, and the date does not end well — she even asks him not to call her again. Tellingly, though, Randall retires to his dorm room happily, telling his roommate that he's found the woman he's going to marry.

This is just the beginning of a pattern that still persists in their relationship, despite the love they obviously share. Randall always thinks that he'll get his way — that his plans are what will make him and Beth happy, no matter how much pushback she might give him over them, and no matter how misaligned they might be with what she wants in that moment.

Another flashback shows them a little older now — they've been together seven years, and Randall is ready to take the next step. He keeps proposing to Beth, even though she's repeatedly said she wants to wait to get married. She's fully committed to him; that's not the issue. She just needs a little more time before taking the plunge.

Again, Randall doesn't take no for an answer. He's absolutely set in stone what exactly he wants, and he won't stop until it comes true. He continues to cheekily propose, obviously thinking his prodding is is cute and endearing, when really, Beth just wants to adhere to her own timeline. Still, though, after a fight, Beth compromises on what she initially wanted, and they get engaged.

Even though there's no doubt that she loves him, Beth has still had to talk herself into a different path so that Randall gets exactly what he wants, exactly when he wants it. Sounds familiar.

Later in life, Beth and Randall are parenting a newborn Tess, and the issue rises again in the wake of a discussion about the end of her maternity leave. Beth again tries to casually explain to Randall that in reaching for his picture perfect visions, he often leaves her with less than what she needs. When he gets upset by what she's saying, Beth defuses, doing what she needs to do to keep the peace yet again, and they head to bed. Randall doesn't want to accept that the problem exists, and so Beth lets it disappear.

Even when Beth wants something as low-stakes as a night to herself away from the house years later after Kevin and William move in, she abandons the plan to make Randall happy. He's upset that she sneakily goes away for the night, and even though he encourages her to go after he calms down, Beth still backtracks into the route that'll make her husband happiest.

The bottom line is that even when Randall has the purest intentions, and only wants to do what's best for his family, he consistently overlooks what Beth wants. She's right — when someone needs to bend to make things work, she's the one who shoulders the burden. We've seen it again and again, even outside this episode.

During the campaign, Randall refuses to drop out even after promising Beth that he'd stop when it became too much for her. She bends, and continues to support him. Last week, despite the horrible voicemail Randall leaves on her phone, Beth still shows up to his work event and puts on a happy face for him. Back in Season 1, when Randall unexpectedly brings home his estranged father to live with them, Beth quickly gets on board. When Randall decides on a whim to buy William's old building, Beth stands by his side throughout the entire whirlwind project.

Even though these concessions have thus far led to a happy, stable life, it doesn't mean they've been fair. They've led Beth to a place where she feels lost in her partner, and like she can't exist as her own person separate from Randall. No matter how much you love your partner, and no matter how much of a team you are, it's never healthy when one person has to consistently lose footing in order for the other one to reach their goals.

Now that Beth's denied him his wishes for the first time in a long time, Randall is quick to accuse her of being selfish. It's so insulting, and mind-boggling that he can't see how unreasonable he's being. I love Randall Pearson as much as the next person, and I never want to see this couple say goodbye. But even with Beth's missteps — that anxiety comment that closed out this week's episode was brutal — Randall has a ton of work to do if he wants to give Beth the appreciation she deserves.