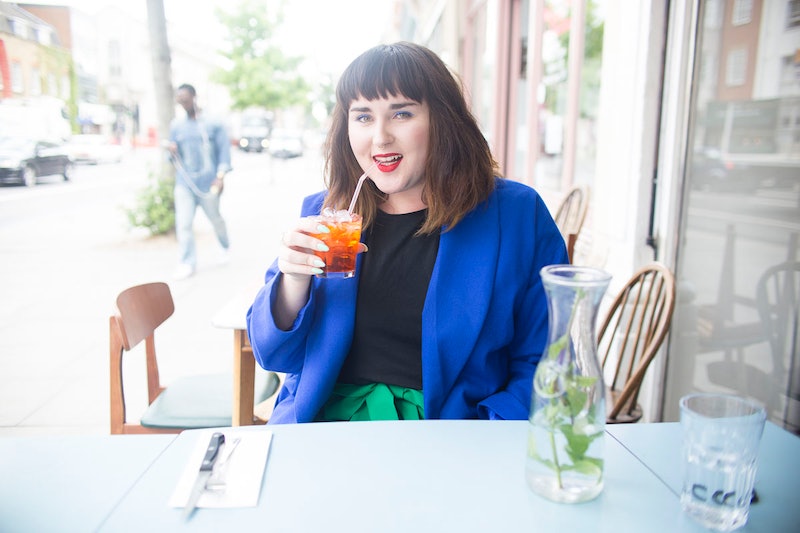 Scrolling through images of Bethany Rutter's plus size clothing collection, Arched Eyebrow x navabi, may call to mind another image: that of the color wheel. You know, the good, old fashioned diagram that organizes a set of hues around a circle in order to demonstrate the relationships between primary colors, secondary colors, and complementary colors. Your grade school art teacher probably explained that certain colors "just go together" while others "clash." Blue and green must never be seen, for example, but purple and yellow are oh-so-mellow.

What your grade school art teacher may not have told you is that these "rules" grow even more complicated for plus size women. When you're fat, you're often bombarded with further guidelines for dressing (and living), one of which suggests that bright colors are to be avoided altogether. You wouldn't want to draw so much attention to your so-called flawed body, after all.

In the promotional shots for Rutter's navabi line, which is available to shop on July 2, this particular recommendation is shattered. In one photo, the blogger, writer, and social media editor styles a cobalt blue winter coat with bright green trousers. In another, she pairs a hot pink button-down top with fire truck red ones. A baby pink gingham blouse is then matched with a magenta skirt.

Even if the styling wasn't as such, though, the range (available in sizes US 10 to 24 or UK 14 to 28) would still be chock full of plus size fashion collection firsts. From its overall minimalist aesthetic, to the emphasis on solid, patternless brights, to the tailored structure, to the maximalist details, Rutter and navabi have created something dream-like and one-of-a-kind in this first major collection by a UK blogger.

"I think that color is really fun and I don’t really believe in 'clashing' or 'matching' colors," Rutter tells Bustle in an interview. "There’s all this logic around like 'don’t wear red and pink together,' or 'don’t wear blue and green together,' but I’ve shot these pieces on me [...] and I just think they look really cool together, but they also look really cool with neutrals."

Every detail of the 10 pieces has been intentional, Rutter adds. She describes the clothes as "stuff I haven’t been able to get that represents the person that I am and the clothes I want to wear, but that is a kind of very visually coherent collection in and of itself."

The designer seems particularly pleased with both trousers in the range, one of which is red, tailored, and boyish; the other green, ruffled, and featuring an oversized waist bow. "We’re not really funneled towards trousers as plus size women," she explains. "Let alone trousers that really make a statement with a cool detail like a bow."

When it comes to the lack of plus size trousers out there, Rutter believes that the situation is comparable to the cultural disdain of short hair on fat women. "I think fatness is like inherently desexualized and paired up with a kind of masculinity or butchness," she notes.

"In an effort to, like, counter that — unless it’s something that you actively want to promote in your image — I think we’re kind of taught to counterbalance that butchness/masculinity with things like dresses, long hair, this kind of voluptuous sensuality," Rutter continues. Unfortunately, this can result in a lot of pigeonholing that causes many plus size babes to fear experimenting with their wardrobes. "I don’t really think that [this logic] is enabling people to make the best choices about the image they want to project or the person they want to be because we’re so bound up with feminizing women into this vintage pinup thing."

This can all result in the simultaneous desexualization and hyper-feminization of fat women. We end up with one metaphorical clothing rack holding shapeless, oversized, darkly-colored wears, while the next one houses extremely fitted, hourglass-enhancing, pinup girl-making ones. Rutter just wants to "wear cool structured stuff with a statement element, rather than always super feminine stuff," though.

In breaking both sets of rules, her styles have ended up being easy to wear yet completely eye-catching. "It just didn’t really occur to me to design something that would help people blend in," she jokes. "I always want to be wearing something that makes me stand out."

When trying to describe the aesthetic that she was after, it occurs to Rutter that she can't actually find the appropriate words. "It’s weird that there’s still this untapped style in the world of plus size fashion," she says. "I shouldn’t be able to design stuff that I haven’t been able to buy before. That shouldn’t be a thing. And yet somehow it is, and we don’t really have the language to describe what it is."

Much is often said these days about the myriad options now available in plus size fashion. But as Rutter says, "The fact that I’m designing into existence stuff that I haven’t been able to buy is a statement on the lack of meaningful choice for plus size women, as good as the market is. It would basically be impossible for a thin woman to design something that she has never been able to buy before unless it was literally going to turn out like some avant-garde thing."

Although contemporary plus size women, particularly those below a size U.S. 26 or UK 30, do have more clothing options available now than they did in the early 2000s, the industry is still infiltrated by many an idea of what plus size women "want" to wear. It's limiting and reductive, and it means that "women that want something with an edge or with a masculine touch" still aren't being well served.

Rutter recognizes that stepping outside of the prescribed box of acceptability that the world so often tries to shove fat women into can be a challenge for some folks. For this reason, experimenting with bright colors such as those in her line might spark a little skepticism. What she personally keeps in mind, however, is that we have a certain level of control when it comes to the ways that people observe and react to our bodies.

"It's like being in a bikini on the beach," she muses. "If people are looking at me, I tell myself that it’s because I have loads of really bright, cool tattoos. Not because they’re thinking, 'Oh she’s so fat and disgusting.' And I think it’s kind of the same with clothes and makeup and image stuff. Like, if I give people something to look at, then that’s why they’re looking. And it kind of alleviates a level of that anxiety that I maybe don’t suffer from as badly as some people, but that is not completely absent."

Of course, easing yourself into eye-catching pieces is totally OK, too. "You don’t have to wear the bright pink with the blue blazer. Wear the green trousers with a white top, and see if that makes you feel good. You’d be surprised by the joy that you can get from your wardrobe."

Rutter's nine-piece line is available in a price range of approximately $51.95 to $167.54 (or £40 to £129.99). As Rutter explains, "One of the things we do at navabi is try to offer the highest quality at the best possible price. Considering the cost of production, she adds, "We’re probably not going to make money off it, or much money at all, but we’re putting out the kind of clothes that you literally cannot find anywhere else, at high quality, and good price, and I feel like that’s invaluable."

Rutter notes that all of the styles are also "made to order, which is cool because it’s better for the environment." It also means that the brand "can be more experimental with the stuff that we make, because it means we don’t have to commit to buying hundreds and hundreds of one item."

Although Rutter was largely hoping to fill a void in her wardrobe when she first began designing these garments, she will no doubt be filling similar voids in many a wardrobe. Tailored, structured, yet statement-making pieces shouldn't be limited to the straight size market, and this particular line feels like a big step in changing the narrative that says otherwise.