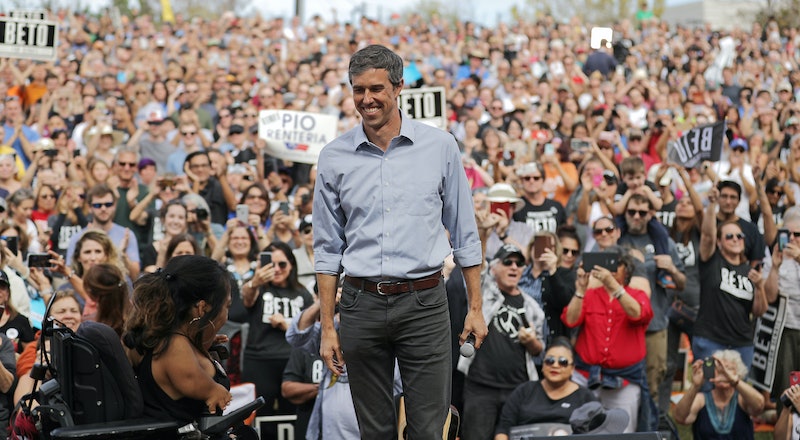 The Democratic congressman from Texas whose unsuccessful midterm campaign against Republican Sen. Ted Cruz propelled him into the national spotlight has reportedly sought advice from the former president many have compared him to. Beto O’Rourke met with Barack Obama in Washington last month, The Washington Post reports, fueling speculation that he'll challenge President Donald Trump in 2020.

O'Rourke was compared to a 2007 Obama before Texas voters headed to the polls in November, in large part because of his charisma and support from Democrats in typically conservative states like Texas. Former Obama aides have even said they could support an O'Rourke campaign in 2020 if he decides to run, as The Hill reports.

But the congressman's in-person meeting with Obama suggests that the former POTUS may also see a path forward for O'Rourke. However, The Post reports that Obama has met with several potential 2020 contenders, including Sen. Elizabeth Warren (D-Massachusetts) and Sen. Bernie Sanders (I-Vermont), though he's remained quiet about who he'd actually like to see run. Just this week Obama's own VP classified himself as "the most qualified person in the country to be president," so the Democratic field is already looking crowded.

Bustle has reached out to Obama's office for comment.

O’Rourke confirmed last week that he's considering a 2020 run, saying at an El Paso town hall that he needed to discuss the possibility with his family after his term in the U.S. House expires in January. "Amy and I will think about what we can do next to contribute to the best of our ability to this community," he said.

The congressman acknowledged that he had changed his mind since losing his Senate race against Cruz last month. CNN reports that he explained to reporters last week that during the midterm election, he "was 100 percent focused on our campaign, winning that race, and then serving the next six years in the United States Senate." But, he explained, "Now that that is no longer possible, you know, we're thinking through a number of things. Amy and I made a decision not to rule anything out."

O’Rourke lost to Cruz by less than three points in the midterm election, according to The New York Times' data. A fairly unknown Democratic challenger coming so close to unseating a veteran Republican senator in a GOP stronghold like Texas caught people's attention — both in and outside of the state. Now, O'Rourke's recent comments and reports that he met with an influential former president are driving his supporters' hopes that he'll actually run for president.

Nevertheless, the best advice he said he's received from people who have run for office in races similar to his suggests he won't announce any official plans until next year. "Don't make any decisions about anything until you've had some time to hang with your family and just be human," he told reporters last week, per CNN.

As the 2020 Democratic field shapes up at the start of 2019, O'Rourke's fans will likely be on the edge of their seats until he makes a formal announcement.